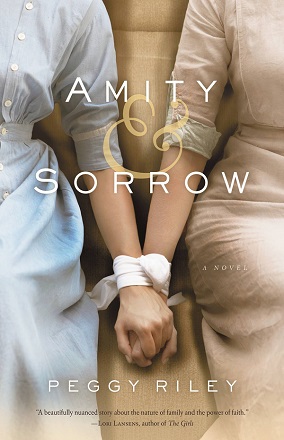 A mother and her daughters drive for days without sleep until they crash their car in rural Oklahoma. The mother, Amaranth, is desperate to get away from someone she’s convinced will follow them wherever they go–her husband. The girls, Amity and Sorrow, can’t imagine what the world holds outside their father’s polygamous compound. Rescue comes in the unlikely form of Bradley, a farmer grieving the loss of his wife. At first unwelcoming to these strange, prayerful women, Bradley’s abiding tolerance gets the best of him, and they become a new kind of family. An unforgettable story of belief and redemption, AMITY & SORROW is about the influence of community and learning to stand on your own.

“Fierce and disturbing…. Riley’s debut novel is a harsh but compassionate look at nature vs. nurture through the lens of a polygamous cult.” (Publishers Weekly (Starred Review)).

“[An] accomplished, harrowing debut…. Riley’s descriptive prose is rich in metaphor…. [and] the haunting literary drama simmers to a boil as it deftly navigates issues of family, faith, community, and redemption.” (Ann Kelley, Booklist (Starred Review)).

“[A] shimmering first novel…. This delicately stitched, finely patterned and poetic novel suggests there is a tipping point at which human resilience disappears…. Riley has a gift for metaphor that gives this novel loft, and a rhythmic way of swinging from present to past.” (Dylan Landis, New York Times Book Review).

Peggy Riley is a writer and playwright. She recently won a Highly Commended prize in the 2011 Bridport Prize. Her short fiction has been broadcast on BBC Radio and has been published in “New Short Stories 4”, Mslexia Magazine, and as an app on Ether Books. Her plays have been commissioned and produced off-West End, regionally and on tour. She has been a festival producer, a bookseller, and writer-in-residence at a young offender’s prison. Originally from Los Angeles, Peggy now lives on the North Kent coast in Britain. She is currently working on her second novel, which will be set in the women’s internment camp on the Isle of Man during WWII.