Perhaps it was inevitable, but the identity switch between Gertrude Stein and Babe Ruth in the winter of 1925 has now been confirmed by Professor Lucille Cauvet of the University of Paris-Nanterre following the discovery of a lost cache of telegrams. With this material proof in hand, along with the testimony of diaries and transatlantic ship logs, Professor Cauvet has now set the record straight.

It all started one December morning in Paris when a tiny woman recognized the baseball star strolling down the boulevard Raspail. She introduced herself as Alice, admitted that she’d always rooted for the Giants, but said it would be an honor if an esteemed American like Mr. Ruth came to lunch.

Her nervous, birdlike face startled him, but her timing was perfect. The Babe had begun to weary of his holiday, and found it a relief to speak English and to be understood. A home-cooked meal—why not?

So he followed her home and planted himself before the table and, after the second bottle of wine had been poured, he began to open up, to tell Alice and another woman present, a stocky, square lady with a big voice, about how he’d turned down the opportunity to go on a barnstorming tour in the Far East in order to take some time in the off-season to think over his future.

“You play the game of baseball, do I understand correctly, Mr. Ruth?”

Alice put in quickly, “Gertrude cares only about writing, about literature. We miss out on a lot of things living here.”

The Babe laughed. “No worries, kid.” He looked around the room. “So it wasn’t you who painted all these pictures?”

The ladies laughed, and he realized that he’d said something foolish, but he didn’t mind, because it relieved him of the obligation of thinking up a compliment for this queer-looking stuff. He and Gertrude tucked in and finished the platter of chicken while the conversation shifted to the Yankees. Alice asked him about his injuries, about the famous belly-ache that had sidelined him. He avoided the truth (he wasn’t going to talk to these ladies about his venereal problems!) and repeated a story about having consumed too much soda pop and hot dogs.

“Yes, that’s what I read in the papers,” said Alice.

Gertrude looked on with an absorbed expression and he could tell that she was following closely, taking in his every word. It wasn’t often than a non-fan showed such interest, and with the third bottle of wine, Babe began to unburden his heart. He felt liberated and safe in the company of strangers. For the first time he admitted aloud what a disappointment the 1925 season had been, when he’d slumped below a .300 batting average and the Yankees had floundered to seventh place, an astonishing 28 and ½ games behind the pennant-winning Washington Senators.

“You can turn the page,” Alice reassured. “You can find the old form, Mr. Ruth. People will forget about 1925 Senators. They will remember your achievements.”

“Will they?” he asked. For months the Babe had been nagged by doubts, losing faith in his gifts. Was he washed up?

Now Gertrude sat up straight, wiped her mouth with her napkin and declared, “You, sir, are bellyaching too much. It’s only a game. How hard can it be?”

The Babe couldn’t believe his ears. This Alice was a nice gal but this other one—huh? Never had anyone spoken to him this way!

“I know very much, as a matter of fact. Take my advice, and your talent will do the rest. You have seen the thing, Mr. Ruth, which is the thing you have seen, and having seen what you have seen, you need to continue to see it. This is so.”

“That’s easy for you to say.” Babe tossed down the rest of his glass. “You write stuff?” That’s what you do?”

“And she gives opinions,” said Alice. “She tells people what to do.”

Often geniuses arrive at the same idea simultaneously, but it is rare that it happens to geniuses in such widely different fields. And perhaps it was possible because of their mutual scepticism. Probably the experiment would never have taken place if not for Alice, the go-between, the facilitator.

The first part was easy, and it still didn’t seem quite serious when Gertrude put on the Babe’s serge suit and raccoon coat and accepted his passport. From his side, the transition required less effort, because Gertrude’s silk kimonos suited him more comfortably than game-day pinstripes, especially in light of the effects of Alice’s cooking, and the Bambino’s growing girth. “I could get used to this!” he declared, putting his feet up and leaning back on a rattan settee.

Gertrude struggled in April and May, striking out three times in a game against Boston and once, in Cleveland, misplaying a routine fly ball so badly that fans and sportswriters were scratching their heads. But she was tenacious, made adjustments, and her batting average steadily improved, while her power was never in question. (Gertrude was a naturally lofty swinger.) By July, she was hitting over .300 and made one of the most memorable plays of the season when she caught a sacrifice fly in deep right field and threw out Ty Cobb sliding headfirst into home plate. A double play! On her way back to the dugout, the inning over, she trotted past Cobb who was still arguing with the umpire and she haughtily tipped her cap at the irate Tiger. The crowd roared with delight, and Cobb’s reaction—livid, obscene, rolling on the ground as the umpire grappled to restrain him—led to his month-long suspension.

Meanwhile, back in Paris, Ruth’s earlier pleasures began to pale. All sorts of people came round to rue de Fleurus and he quickly grew tired of them. The telegrams he exchanged with Stein at this time are revealing. Upon receiving Stein’s lapidary message, “Lefty Grove—what?“, he sent this troubled reply:

“Make him pitch you inside. GERTIE, who ARE all these weirdos? What am I supposed to SAY to them? G Leblanc—neurasthenia—what? I WON’T do NUDE for Picasso! Hemingway—freeloader— needs title—what? This joint is a madhouse!”

Clearly, the Babe didn’t like the situation and was groping to find his way. Similar telegrams streamed in almost daily from Paris, while Gertrude’s replies were sporadic and sometimes cryptic, leaving much to interpretation. For instance, her July 28 message:

Frankly, the Babe was getting fed up, and Alice had to fetch him home one night when he sneaked away to spend the evening in the company of some rue Blondel floozies and returned, much the worse for drink, to evict the hangers-on at Gertrude’s place with shouts and fisticuffs. “OUT of here! You can all get LOST and stay LOST! YOU CAN QUOTE ME ON THAT!”

Young Ernest trudged off into the darkness, snuffling.

It was an unhappy evening but it seemed to clear the air a bit. Alice consoled him in following days with a leg of lamb with broad beans and a large serving of her special brownies. Back in New York, Gertrude had managed to lift the Yankees back to the top of the American League, a remarkable achievement which included 12 of her 46 homers hit to the opposite field (look it up!) which, though undeniably impressive, was not enough to carry them through the World Series against St. Louis, which the Yankees lost when Gertrude rashly tried to steal second base in the ninth inning of the seventh game.  It was an embarrassing exit, and received more publicity than it deserved, because of course the club wouldn’t have been there without her earlier, and enormous, contributions. Still, it revealed, incontestably, her state of fatigue. It had been a long season. Her October 10 telegram announced: “Time to come home.”

The Babe was in full agreement. Yes, it was time.

Thus the experiment ended. Upon her arrival at the rue de Fleurus, Gertrude hugged Alice so hard that she aggravated Alice’s scoliosis, and put her in the Hôpital Lariboisière for three days. The Babe, though he would miss Alice’s grub, was eager to return to his true calling and seems to have recovered his focus and motivation, in his mighty efforts to surpass the impressive stats that Gertrude had racked up in 1926. Would Ruth have managed his amazing 1927 season, with 60 home runs, if not for his Parisian hiatus? In a forthcoming article in the Revue française d’études américaines, Professor Cauvet explores such questions. Would Stein have attempted her subsequent forays into operatic libretti, if not for her Bronx adventures? Such is history—such is humanity.

Charles Holdefer is an American writer currently based in Brussels. His work has appeared in the New England Review, North American Review, Slice and other magazines. He has published four novels with the Permanent Press and is now at work on a new novel. More information is at www.charlesholdefer.com 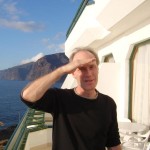 Charles Holdefer is American writer currently based in Brussels. His fiction has appeared in the New England Review, North American Review, Chicago Quarterly Review and in the 2017 Pushcart Prize anthology. His recent books include GEORGE SAUNDERS' PASTORALIA: BOOKMARKED (nonfiction) and AGITPROP FOR BEDTIME (stories).