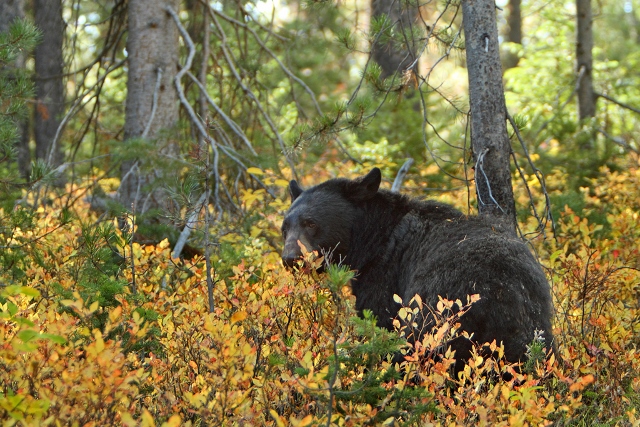 It was around midnight. My buddies and I were running up a deep dark canyon in the Sierra Nevada, trying like hell to keep up with the hounds. They were hot on the scent of something. Finally, we could tell from the sound, the hounds were at bay. Whatever it was they were chasing was treed. Now the chatter amongst us circled around whether it would be a bear, or a lion, or a measly ol’ coon. But Jimmy knew. They were his dogs, “It’s a goddamn bear. My dogs don’t chase nothing else.” With that, the excitement of the chase became much more intense. We’d been busting through three miles of bitch-ass brush, on our hands and knees at times, but now all the cuts, scratches, and bruises were brushed aside. It was now time for the mortal end of some large carnivore.

I’d bagged a deer, now I wanted a bear. All the men I’d hunted with—my Dad, Grandpa, and uncles—had a bear to their credit. Amongst us boys—I didn’t mention, I was twelve at the time—it was an unspoken truth that the best hunter would be the first one to get a deer. Then the first one to get a bear. I needed my bear.

It was a different time when I was growing up. There was a favorable opinion about hunters back in the Mariposa hills during the 50s and 60s. Everybody hunted—men, women, kids, adults. Being a hunter put everyone on an equal footing. All of us boys brought the horns of our first deer to school to show our classmates. There were the inevitable questions about where I’d shot mine. One teacher was so adamant about wanting to know, I’d didn’t think I’d pass his course if I didn’t tell him. But I didn’t tell, not something you did, still passed English. Different nowadays. If a twelve-year-old was seen walking across a field with a .22 slung over his shoulder, a SWAT team would be called out.

Now, back to when I was in the seventh grade and the boys and me had just treed a bear. It had been agreed from the start that I was going to be the one to shoot the bear, and I was going to do it with a bow and arrow, the traditional kind, not the modern compound type. To our eyes, the new compound looked more like a ten-speed bicycle than a bow. It was another ten years before some city type showed up here with one of those fancy ones. Of course, he was laughed at and of course, he didn’t get anything.

The animal we had so diligently chased found it convenient to ensconce himself in a cedar tree with branches that furled down clear to the ground. So thick a pick-up truck would have been concealed amongst them. The dogs were going apeshit, and Jimmy said we need to get on with this. No hesitation on my part. This was my bear. Up the tree I climbed with a bow and a couple of arrows. I felt from the start what Custer must have felt deep down, “Boy, this is a bad idea.” But bad ideas be damned. I had to press on. This was the trial by which all dumb-ass kids were judged. And there I was, the kid on trial. Some fierce-ass critter somewhere just above me and two lame-ass fuckers on the ground as an audience who didn’t say a damn word about the idiocy of my serious and sustained effort. Everyone was glad it was me, cuz somebody had to go up after him and that was a fact. Chasing down a Hoodoo bear wasn’t easy; it’s painful and exhausting in the extreme. A kill was now inevitable. This was the reason why I was halfway up this cedar tree, in the pitch dark, trying to climb with one hand while clutching the bow and arrows in the other. Even though by now I must have realized the abject futility of trying to bring the bow to the bear while trying to hang on. It was too late to turn back. It seemed as if it were preordained that I continue toward this impending bedlam regardless of what common sense was insisting.

I must have climbed up further than I thought. The flashlights on the ground kept sweeping from side to side, the branches creating dappled light and shadow. They were desperately trying to get a glimpse of the drama about to unfold. The beams sometimes producing a speck of light in the area where I was. It was at one of these junctures the light flashed, and I found myself staring directly into the face of that ol’ bear. His eyes glowed red. That black bear had foam around his mouth, meaning he was pissed. He opened his mouth, and four huge, monstrously huge teeth stared me in the face. This was it. I was a goner. Now I knew exactly what Custer felt in the end. There was grunting and huffing. I could feel his breath on my face. It smelled as bad as anything you could imagine. Now he was going to have a piece of me.

While I was just waiting for it, bear must have realized I wasn’t a mortal threat to him; nevertheless, he felt obliged to give me a reminder of my stupidity by slapping me upside the head with his paw. Knocked me plumb out of the tree. I landed on my back with bow in hand. I had held on to my weapon. That’s the best I can say. The guys all shined their flashlights on me.

“Jesus Christ, your head. Blood’s spurting out,” Raymond said and wiped away some of it. “Look at that gash, gotta be two inches long and an inch wide. Jimmy get your needle and string.”

Jimmy carried string and an upholstery needle in his wallet in the event he’d have to sew the guts back into one of his hounds that got ripped open by a bear or mountain lion. I laid there trying not to be a sissy by hollering or whining while he put nine stitches in my head. Not the neatest job in the world, but it did the trick.

I hobbled home; Mom sent me to the doctor. He gave me a bunch of shots against who knows what but left those stitches the way they were. “You’ve not gonna get a prize for pretty anyway, son.”

I still had aspirations of killing a bear, but my next encounter changed all that. I was out in the woods near a berry patch I knew about near Owl Creek. Damn, right there in my berry patch was a bear. Here I was, in broad daylight, unarmed. The bear looked up, saw me. I looked into big brown eyes. What I saw was so astounding I couldn’t think of anything else. The eyes, they spoke to me the same way a human’s eyes would. There was meaning in that animal’s expression. I could tell he was beseeching me to just leave him alone. And there was a sadness we should meet this way, so close, yet so far away. An animal with a mind not unlike mine, circumstances in the far distant past set us apart and on a different path. I realized then that this animal must become my totem.

As an old man, I reflect on how often we met each other in the woods since that time in my youth, paying each other nothing more than a fleeting, though respectful, glance. I have not and never will take the life of ol’ Hoodoo bear.

David Tarvin grew up in a little cabin, at the end of the road, in the big woods around Mariposa, California. He graduated from Mariposa High on June 14, 1971, he turned 18 on June 21, he enlisted in the Army on June 28. Served two years in Germany. Back home, he embarked on being a carpenter. As an apprentice, that work was hit and miss so he learned how to cut firewood, trap coyote, fox, and bobcat, and prospect for gold. In his pickup he carried carpenter tools, a gold pan, a chain saw, and a .22. Life as a jack-of-all-trades ended abruptly in 1984 when he shot a man who was coming at him. He’s now at San Quentin State Prison, without many trees around.