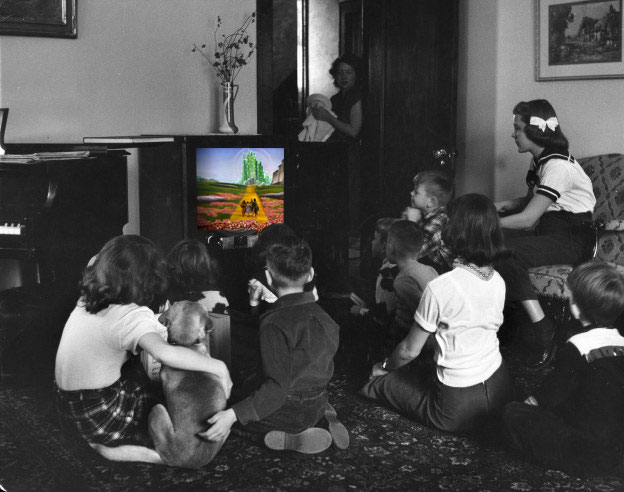 I’m just six, wearing a tee and baggy shorts, hand-me-downs from my older brother. He’s smart and funny and eight inches taller than me. My hair is cut short, no frills, and a year from now, I’ll come home crying because someone at school called me a boy. When I look back at pictures from that time, I can’t imagine how anyone could think that pixie with a toothy grin and sparkling blue eyes was anything but a girl.

Though I haven’t dressed up, I know this night is special. My brother and I are going to a big party with Dad. People fill the house. Kids are packed together on the floor and couches, clustered around a TV set, with the grownups standing in all the space that’s left on the first floor. It’s a special night, worthy of a party, because the Wizard of Oz is going to be shown on TV for its annual broadcast. I’ve seen the Wizard before, but this is the first time I’ll watch it in someone else’s living room with so many other people.

The movie starts, and there’s Dorothy in her house in Kansas. Then there’s that terrible storm. And then the magic part begins, the part where Dorothy is with all the munchkins and they all love her and help her. But something is different. When she comes out into the munchkin world, everything is in color!

I watch in excitement and confusion. Even as the story unfolds, fresh and new with the bright emerald green city, I struggle to grasp how I’d seen before only a dim black and white vision—and understood only a few of the many references—of this multi-hued world. Tonight I finally understand what the witch means when she talks about Dorothy’s ruby red slippers. Her shoes are actually shiny bright red!

Back then, our family had a small black and white set, just like my grandma did at her house. Until that night, I didn’t realize you could watch things in color. What was even more confusing, the movie starts in black and white. Why did everything change when she left home?

Years later, in a film history class, I’ll learn that the B&W frame was a cinematic plot device to accommodate the emergence mid-production of Technicolor 4 film. But when I was six, all I knew was that the world we kids wanted to be in, the world of excitement and magic, was the world of brilliant, vivid color, of yellow brick roads and blue skies and orange lollipops. And that night, children and grownups alike were sharing the excitement of it together.

Nowadays, I don’t have to wait for an annual broadcast or a special party. I can watch the Wizard of Oz around the world whenever I want. With instant access to shows via Netflix or Hulu, I can see practically everything, all the time, anywhere I get the Internet or have access to a DVD player, which is now everywhere. I can watch it on my phone or on my laptop, in my room, in a café, on a bus, or on the street with other people nearby. I could wear earbuds, those itty bitty devices you can carry in a pocket that have replaced bulky headphones. These earbuds connect to my phone, which, of course, has been freed from its connection to a wall. Instead, it fits in my pocket and travels with me.

I’ve never actually watched a movie on my phone, preferring to watch on a larger screen. But I know I can, and I’ve seen you do it. You listen to your music or movies on your portable device, and no one else is bothered, like they used to be when people had much larger devices called boom boxes because the music boomed as they walked by. That was the whole idea, to make the world listen to what you wanted, at high volume. But now that you’ve left the boom box in the attic, and you walk down the street with your ears attached to cords, and you don’t make eye contact, you aren’t being thoughtful of others, but rather you don’t want to be bothered by them. You’ve tuned them out, so you don’t have to talk to them, don’t have to share your music or your thoughts.  If others talk to you, you won’t even hear them, because you are plugged directly into the thing you’ve chosen to put in your head, and it has pushed everyone and everything else out. You now have the tools to shut out the noise of other people for just a little while, or maybe for life.

Which makes me wish I could return to a simpler time.

I want to hear “Over the Rainbow” again, to think about the charm of the movie, the sweetness of Dorothy, and the beauty of her singing. I want to be in that living room full of people and remember seeing the green emerald city for the first time. So I youtube it, because it’s the quickest way to get to the song. But instead of finding Judy Garland, with her voice of a young girl-woman, my search reveals Israel KamakawiwoOle’s version. That’s because his is far more popular than Judy Garland’s. So I listen to him instead, and am transported, as he’s done for so many millions of others, that is, 44,134,920 for this particular video on this day, with 228,643 likes. And his song takes me away, and I close my eyes, and I think I am going back to Kansas.

But I’m wrong, because it’s really not Garland’s version. KamakawiwoOle has blended “Over the Rainbow” into a medley with “What a Wonderful World,” but the lyrical shift isn’t the only difference. When he asks “Why, oh why, can’t I?” his voice is no less moving, but it isn’t that of a young girl on a farm. It’s the voice of someone who will die of a heart attack at age thirty-eight because, despite being all laid back and Hawaiian and playing a uke, he’s also a grownup, and his enormous girth suggests that he didn’t embrace moderation as he grew, and maybe everything didn’t go all that great for him. He’s singing that he can’t fly somewhere over the rainbow, and I believe him. Because we can’t. None of us can fly. And even if we could, we can’t fly over a rainbow.

And I think to myself, not what a wonderful world it is, but why, as a child, I didn’t hear Garland ask that same question: why oh why can’t I. Why did her song sound so full of hope, and his sound so uncertain, when the lyrics were the same? Was it them, or was it me?

Maybe it’s because she’s singing in black and white. She doesn’t get to appear in color until she reaches Munchkinland.

As I sit and listen again to KamakawiwoOle’s vision, I realize that I can’t figure out the shades of color in the world we now inhabit. Sometimes it feels like Munchkinland, as I look around me in wonder at all the crazy mix of styles, the wondrous magical devices, the inexplicable people. It’s a raucous splash of life, but it’s also colored by the undertone of our limits.

I remember my excitement when I first noticed color as a child. But when did I start longing for that simple time when I heard only hope in Garland’s black and white song?

Formerly a writing professor, Gayla Mills has published in the Little Patuxent Review, the Doctor T.J. Ecklenburg Review, Spry, and more. Her essay collection Finite won the RED OCHRE LiT Chapbook contest. Her book Making Music for Life: Rediscover Your Musical Passion will be published by Dover in August. http://www.gaylamills.com