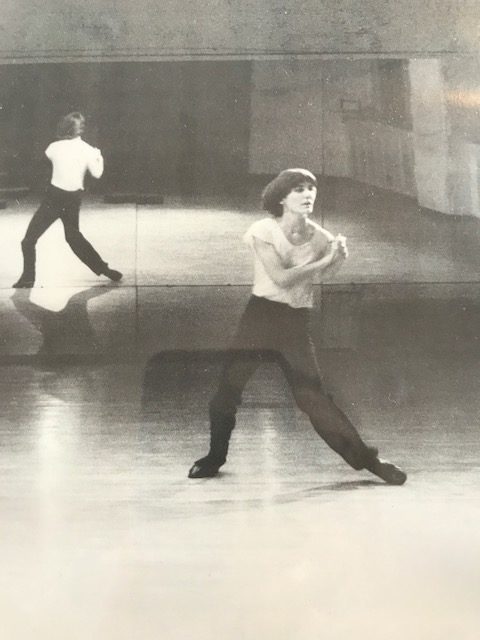 I love moving on this blonde, wooden floor, falling on it, lying on my back on it, even dozing on it for a half hour or so, after which, I wake up with a start, stiff and guilty for sleeping through precious rehearsal time, ordering myself to come up with something new or at least reconsidered, reshaped or refined.  This studio, in Santa Monica’s downtown, is far cleaner, larger and lighter than the dark, dusty fourth floor walk-up I’m used to renting by the hour in New York’s flat-iron district. It’s July, 1980. I’ve moved here recently and reluctantly with my boyfriend. That this sumptuous space is all mine for a couple of hours a day, three days a week, is my consolation prize for severing myself from the nerve center of modern dance, my passion for the past ten years.

I’m making a solo.  I’m not yet confident enough to dance freely with an empty mind, knowing that I will eventually make a piece from whatever movements arise from my body. I still accept as Word the tenet of the seminal choreographer, Merce Cunningham, that a choreographer needs ideas and structures to take her beyond the habitual into fresh material. Adhering to this aesthetic like a transitional object, I create unrelated phrases for my arms, legs, hips and shoulders, even my head, and put them together, like patting my head with one hand while making circles with the other on my tummy. It keeps me busy, and I never have to face the frightening question of what I feel like doing, which, I think, would be too self-indulgent to be productive.

By August, I have a dance in four parts, each with a different tempo, spatial pattern, theme and mood. Since it makes its own music with footfalls and body slaps, I dance it in silence and call it Sonata. In September, I audition it for a Los Angeles Choreographers’ Showcase.

After the audition, I’m resting on a folding chair in a dingy downtown studio, still sweating, catching my breath and eating an apple when Fred Strickler, one of the judges, rushes into the room looking like he’s in shock.

“Your dance is so rhythmical and musical.”

This is the first time I’ve met Fred, a former member of Bella Lewitzky’s dance company, now a tap dancer and professor of dance at University of California, Riverside.  I doubt that I’ll ever teach Sonata to him, but I’m glad he likes it. It seems the rest of the panel does, too. They accept it into the showcase, and I perform it in December at UCLA’s Schonberg Auditorium, a 500 seat venue, the largest place I’ve ever shown my work.

The standard of excellence that matters to me, however, lies in New York. So the following February, I fly there to audition Sonata for Dance Theater Workshop’s choreographer’s showcase.

DTW is a black box venue on W. 19th St. At the moment, only the work lights are on, casting their neutral, harsh glow as I perform. Seven or eight judges, established choreographers, producers and teachers, including Bessie Schonberg who was my choreography teacher at Sarah Lawrence, sit several chairs apart from each other as though they don’t want to be contaminated by each other’s opinions. Seducing them seems unlikely. All I can do is feel the thin, rubber soles of my jazz shoes on the marley; the soft lavender knit pants on my legs as I move through the space with my steps and stamps; the purple silk t-shirt against my skin as I get increasingly sweaty from the dancing and from the lights. Whatever the judges think of my dancing, I know that it’s fluid and that the rhythms, timing, direction changes and shapes are clear.

This is the third time I’ve auditioned a piece at DTW. It’s my last shot. I can’t take any more rejection from this place. So I don’t care about the flatness in David White’s voice, DTW’s producer, when he calls later to say, “You’re in, but the dance needs editing. 12 minutes is too long for a solo.” And I listen distractedly while Bessie tells me I must “indulge more in each moment.” In the end, they accepted me. All the rest is commentary.

In April, I perform Sonata at DTW on four consecutive Tuesdays. After the first performance, a young, up and coming dancer, Deborah Gladstein, rushes backstage to say how much she loves the dance. We become friends. She convinces me to take a choreography class which Bessie, now retired from Sarah Lawrence, will be teaching. When Bessie assigns us to work in duets, I make a short duet for Deborah and me using material from Sonata—small circular movements of the head, shoulders, and hips which I put in counterpoint to one another, like an orchestration of tics, shrugs and wiggles. After coordinating body parts all those months, the study practically makes itself. Bessie greets it so enthusiastically that one Sunday afternoon, after leaving a dance concert together, Deborah turns to me and asks, “So Liz, should we do a concert together?”

In October, wearing a pink rayon top, black silk pants and jazz shoes, I’m running in a circle backwards during the third section of Sonata, part of the evening of solos and duets that Deborah and I are presenting at the Merce Cunningham Studio on the top floor of Westbeth, an artists’ cooperative in the far West Village. I concentrate on the lift of my torso as I run, barely aware of the anxious hum in my chest wondering whether I’m sufficiently engrossing the audience. I accelerate my pace and make the circle tighter and tighter until I’m running as fast as I can in a spiral towards the center of the studio where I will, in a moment, change my direction and stomp my foot as a way of breaking my momentum  and ending this section.

But before I get there, I lose my footing, fall backwards on my butt and slide several feet on the shiny floor. Just as I’m thinking oh shit, instinct takes over. I rest my arms and hands above me, exhale and look up at the ceiling as though the falling and the sliding and the laying there and the breathing are all intentional. Then I roll onto my side, stand up and resume the dance like a basketball player who’s just missed a big shot but knows she has to keep moving. Whatever Jack Anderson thinks, he gives us such a positive review in The New York Times that I can return to Los Angeles, if not complete, then with a less acute ache that my dancing days in New York are over.

Over the next four years, I perform Sonata in many venues, including at UC Riverside, where, at Fred Strickler’s invitation, I’ve been teaching dance technique and composition while he’s on sabbatical, touring and tap dancing. When I decide to present an evening of choreography at the House in Santa Monica, I ask Fred when he returns from touring if he still wants to learn it. He does.

By now, I have stripped Sonata’s structure down to its essential phrases, to what my body has to say or sing, making it several minutes shorter. David White, DTW’s producer, would approve. So would Bessie: I actually linger in the movement at times, allowing a leg extension to unfold slowly while I sink into my supporting leg and soften my chest, or stopping in a lunge and opening my arms while I shake my head in a small, sad “no” like I’m imitating the aging Katharine Hepburn’s tremor as she recalls her classic line, “The Calla Lilies are in bloom again.”

In other words, I’ve discovered what pleases me and allowed its expression.  And what pleases me is getting to the floor in the second section so seamlessly that my knees touch the ground without a sound. When Fred has difficulty landing on his knees without crashing them, I demonstrate: I roll my left shoulder forward, hang my head down and round my back. Then I roll my right shoulder back, tilt my head up and arch my back. From there, I lower my body onto the floor as though I’m about to pray, suspending my fall with my core so that there’s no crashing but there’s no holding back either. Fred says “Oh, that’s so nice,” just as I reach the ground with both control and surrender, like gravity and I are playing together, and we have both won.