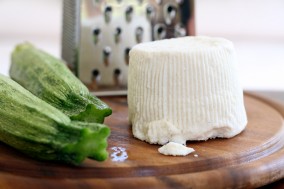 This got me thinking.

What is the process for making cheese?  Doesn’t it involve bacteria being added to milk? Coagulation? Curds and whey? Isn’t there some kind of pressing through webs of fabric to squeeze out fluid?

What kind would I be? Since I’m lactose intolerant, this could be tricky. Could I write a story with a lactose intolerant character named Feta? Or Brie Stilton? Could she have a wise-cracking best friend named Mozzie? Or Edam?

I once went to a party where they served a cucumber salad with a cheese I’d never heard of: Halloumi. I worked the taste of this cheese into a short story that ended up being nominated for a Pushcart Prize. Not sure the cheese is why (or whey), but as a process point, I wanted to mention it.

When I was growing up, there were limited cheese choices. We had American or Swiss. For special occasions and guests, we would whip out cheeses with a waxy, hard red cover (e.g. Gouda) that you had to carve with a sharp, short knife; when the knife was pulled out of the red bomb, it required energetic use of a Brillo pad to scrape off that waxy residue. The cheese was seductive, it was hard to stop eating it, and it is no doubt responsible in part for my cellulite-ridden thighs. (This damage occurred long before the lactose intolerant diagnosis. No one was lactose intolerant back then; you just got a stomach ache after you ate cheese; cheese was like a bad boyfriend you knew wasn’t good for you, but you couldn’t stay away).

So, I’m not sure I have a formal writing process. Something gets into my head and I go with it and see where it takes me. Sometimes you have a premise, an emotion, an idea, and as you write it becomes something else entirely. I once heard a playwright say something like:  you start with an idea of going into a room and if you’re lucky, it becomes a house.

With Hot Spots I was intrigued by how extreme (and sometimes deluded, or insane!) we all are about something. Look at Republicans and Democrats. I wanted to delve into characters and try to figure them out. Why are they this way?  I just completed a “Freud as Fiction” course that looked at Case Histories as short stories.

In some previous published stories, I had played around with technology as the driver of the story’s form:  PowerPoint for the Pathetic (Epiphany), Spreadsheet of My Heart (The Battered Suitcase) and GPS for the Car-less (Minnesota Review).

I thought maybe it was time for an APP. The APP format gave me a framework to explore the extremes in these characters and how they can’t seem to budge from them. But I’m never sure these experiments will work as a story and the process of agonizing over form and intent is never-ending.

Back to the cheese.

I think if I were a cheese, I’d like to be Ricotta. It sounds exotic (which I’m not); a little musical (which I am) and it’s good to throw into almost anything.

But please don’t call me Goat. And I would definitely not be Cottage cheese. Too mushy and gross. Who came up with that phrase? Could there be a story about a town filled with cottages all made of cheese? Who lives in those cottages?

I’m sorry but I’ve got to go. I think I have an idea for a story.

Nancy Ford Dugan lives in New York City and previously resided in Michigan, Ohio and Washington, DC. Nominated in 2012 and 2013 for a Pushcart Prize, her short stories have appeared in over 20 publications, including Cimarron Review, Passages North, The Minnesota Review, Epiphany, The Alembic, and The MacGuffin.