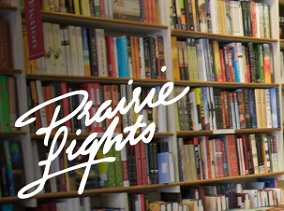 Publishers Weekly, familiarly known in the book world as PW and “the bible of the book business,” is a weekly news magazine focused on the book publishing business. It is targeted at publishers, booksellers, librarians, literary agents, authors and the media. It offers feature articles and news on all aspects of the book business, bestsellers lists in a number of categories, and industry statistics, and pre-publication book reviews. Every year for the past twenty-two years, PW honors one independent bookstore as Bookstore of the Year. This year, of the eighteen bookstores nominated, five have been named as finalists and the winner be announced during the BookExpo America held in New York City at the end of May.

Q: What is the history of Prairie Lights Books & Cafe?

Jan Weissmiller: Prairie Lights was opened by James Harris at 102 S. Linn Street in Iowa City on May 13, 1978. It moved to its present location at 15 S. Dubuque Street in December of 1983. It has since expanded twice in this location and now is an 11,000 square foot space occupying three floors. It includes a cafe and a full floor of children’s book. The reading series, Live from Prairie Lights, began in 1990 and was broadcast by the local NPR affiliate for 18 years until funding for Iowa Public Radio was cut. The readings are currently streamed live through the internet. In January 2008 Jane Mead and myself—both graduates of The Iowa Writers’ Workshop—bought the store.

Q. What challenges have you come across in running an independent bookstore?

JW: 2008 was a somewhat ill-fated time for us to buy the store. Our challenges are those of most independents: Amazaon, e-books and the economy. Downtown Iowa City was greatly affected in 2000 when the largest mall in Iowa was built in our bedroom community of Coralville. Though recently the downtown has begun to revive. Q: What are some successes and surprises you have had throughout the years?

JW: President Obama’s visit in March of 2010 was our biggest moment of surprise. We were also surprised in 2010 when Paul Harding—then teaching at The Writers’ Workshop—won The Pulitzer Prize for Tinkers, and was published by Bellevue Literary Press. Margaret Atwood surprised us with an unexpected visit in October when she was in town for other reasons.

Q: What is your bestseller of the year so far?

JW: Our bestseller is The Wahls Protocol by Dr. Terry Wahls who lives in Iowa City. That is followed by The Keillor Reader (Garrison Keillor did a reading at our store) and The Empathy Exams by Leslie Jamison. We are hand-sellling the last one extensively. Our buyer, Paul Ingram, has a book coming out next month, The Clerihews of Paul Ingram. It will be on the June Indienext List and has a blurb from Roz Chast. We are sure it will be our bestseller for 2014.

Q: What are some of the events you have hosted?

Q: If you could have any two writers collaborate on writing a mystery novel, who would they be? JW: Our Cafe is called “The Times Club” after a literary salon that was held in this very same building in the 1930’s. It was organized by Grant Wood who brought in Robert Frost, Sherwood Anderson, and Robert Louis Stevenson—among others. We now host art shows in the cafe that are curated by recent MFA’s in the storied UI Painting Program—the same one in which Grant Wood taught. We had a wedding in our store a couple of years ago and will have another on May 17th. We’re thinking of competing with Las Vegas as a pop-up wedding site.