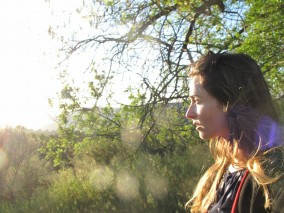 I am a screen and fiction writer born in Rome and raised as a teenager in Los Angeles, where I became obsessed with canyons, quartz, and the Grateful Dead. When I moved to New York in my early twenties, I steered my fascinations towards the discovery that a huge slab of granite beneath the city of Manhattan is the reason why nobody there is able to walk or think slowly. And it was there, in New York that I turned back to look at Europe for the first time as a writer. Vauville takes place in a French summer home off the Atlantic Coast. The protagonist is a teenager who travels to Europe from the United States to discover a hidden piece of herself and her own family. It’s an important story for me because it was the first story that I wrote as an expat, reflecting back on the separation between these two continents that have formed my life.

The absence of a mineral subterranean life and psychedelia in the city of Rome made my return to this homeland a bit harsh, but opened me up to new interests including: abandoned castles and the nightlife of cattle. I lived in a remodeled barn inside the Castle of Torre in Pietra and worked on a variety of romantic comedies. The films needed to have linear plots and rigid narrative structures in order to make money. I entered a world of teenagers, pink hearts, chocolate, and teddy bears. It was great for a while, but I started missing the freedom of non-linear story-telling soon.

This longing evolved into my short story collection, Sister Stop Breathing, the furthest thing you can find from a conventional Hollywood-style romantic comedy. In its pages you will encounter creepy priests, incest, and murderous mothers. When asked if these scenarios are in some way a reaction to the narrative constraints of mainstream cinema, I say: absolutely yes! I am glad to have a smaller audience to celebrate my characters with. I was happy to receive positive feedback from Jonathan Ames, Gary Shteyngart, and the lovely Mary Caponegro whose experimental prose has inspired me since I was a teenager.

I am now working on my first linear/narrative book, a novel to be published by Fabbri Editori/Rizzoli in Italy. My protagonists are a bunch of cross-cultural teenagers living in the suburbs of Los Angeles and causing damage. My literary heroes are, of course, all those writers who have given me the courage to begin stories where they usually end: Ben Marcus, Diane Williams, David Foster Wallace, Lydia Davis, Gary Lutz, and the original homeland inspirator, Italo Calvino, to name but a few.

Vauville first appeared in the Noon 2011 issue and it is the final, most narrative story in my collection Sister Stop Breathing. I submitted it to the Gertrude Stein contest because it’s one of the stories I’ve loved the most. It has followed me in different shapes and versions throughout all the important places of my heart. It seems to have a life of its own.

I was five months pregnant when I let Sister Stop Breathing into the world. Four months later I realized I had to take structure and form to a whole new level. Having a child is definitely not a romantic comedy nor does it grant one the luxuries of non-linearity. Babies want rigid schedules and undivided attention. But even this has had a good effect on my writing. Not a minute of my day goes to waste now, and I’ve become a more disciplined and focused writer, and possibly a better one because of this.

Chiara Barzini is an Italian screen and fiction writer. She has lived and studied in the United States where she worked as a correspondent for Italian Vanity Fair, GQ, Flair, Rolling Stone Italy, and Marie Claire. Her writing has appeared in Bomb Magazine, The Coffin Factory, Noon, The NY Tyrant, The Milan Review, as well as the Village Voice, Rolling Stone, and Harper’s Magazine. She is the author of the short story collection Sister Stop Breathing (Calamari Press.) To watch Chiara reading Vauville at the Noon 2011 launch at the Center for Fiction in NYC, please click on this link: http://www.youtube.com/watch?v=d9v7ZYNC0Z4. She currently lives in Rome and is working on her first novel for Fabbri /Rizzoli.