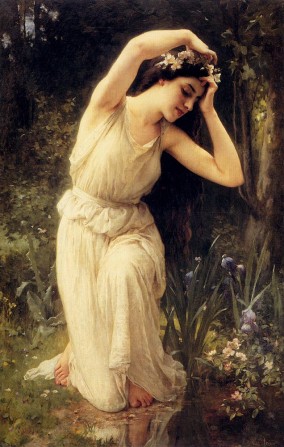 When I lived in Serbia, there was nothing I hated more than going to Serbian villages. They were a symbol of boredom to a young city girl hungry for the exciting, different, sophisticated, skyscraper-and-concrete world outside of Serbia. But now that I have lived in the United States for ten years and traveled through half of the world, I remember those sleepy little nooks with nostalgia: lambs playing together and women in headscarves, steep rocky roads, white mountaintops, intoxicating tall grass meadows, and forests of fragrant plum trees.

These villages curiously became my inspiration through my main muse, my 83-year old grandmother Ruža, who keeps revealing to me their incredible wealth of myths, legends, superstitions and beliefs that challenge imagination.

It all began about five years ago, while I lived in Manhattan, when my father Branimir, over Skype, asked me one day: “Why don’t you write a book?”

Why don’t I? I asked myself. I have an M.A. in journalism and a B.A. in literature. I have published three books of poetry, wrote numerous articles in both English and Serbian, and earned a bunch of awards for my writing in Serbia. I could write a book, a good book. But what would I write about?

Then I remembered what a good friend of mine, former Washington Post film critic Desson Thomson, told me once over a cappuccino: “You should write a story only you could write.”

It was suddenly clear. My book had to be set in Serbia. It had to be immersed in ancient, rich, deep, hidden Serbian traditions and culture people here would enjoy reading about.

So, every time I would go to Serbia over the next five years (about two times a year), I would interview different people: my maternal grandparents Nadezda and Tomislav living in the southern Serbian village of Nozrina, their neighbors, my mother Mirjana, and most importantly, my paternal grandmother Ruža, who never knew she was being interviewed. (My voice recorder looks like a cell phone. Please don’t tell her.)

Ruža and I, after a long embrace, would chat in her invariably stuffy one-bedroom apartment in Niš. (The draft in Serbia is a killer.) I would always sit on her armchair, and she on her sofa, with a framed black and white 60-year old photo of my handsome, mustachioed, late grandfather Svetomir (Holy Peace) staring at us from the wall. I would then ask her to tell me stories about our family, her family, and people I never laid eyes on like her grandparents and great grandparents, aunts and uncles, in-laws, all from map-less southern Serbian villages.

At first she would say: “What can I tell you?” My grandmother is an introvert and doesn’t like to talk much, prefers to be alone with her TV game shows that she’s excellent at.

But I would smile and persist. “Tell me about your grandparents? What were their names? What did they do? How many children did they have? How long did they live? How did they die?”

And once she began reciting the family tree she remembered so well, I would ask: “What was she like? What was he like?”

Then she would inevitably remember to tell me some fascinating story, such as how her own mother wanted her dead when she was a one-year-old, how her uncle was shot in the stomach by his comrades, how her father hated priests and never went to church, how she caught her husband seducing another woman while she was pregnant with their second child, how she wanted to give up her third child but her mother-in-law wouldn’t allow it, how abortions in her time were performed by old women’s hands in cold, damp, moldy sheds.

I would listen to her stories in awe, trying to absorb as much as possible, thinking how radically different my life had been from my grandmother’s, even if separated only by a half a century.

Then, when I would come back to the States, I would go to my favorite café and start writing.

This is how The Nymphs came to life.

Last spring, I asked my grandmother about vampires, as rural Serbia is their birthplace. So I thought, who better than an 83-year old woman who grew up in a small village and survived two wars to tell me stories about vampires?

But my vampire quest didn’t lead anywhere. She didn’t know much or didn’t want to divulge beyond the fact that the villagers of Gorčinci (Little Mountains) believed in vampires and would tell you to stay away from the cemetery at night, so “a vampire wouldn’t get you.”

But then, without being prompted, she began telling me about the time my late grandfather Svetomir—a Partisan, Josip Broz Tito’s soldier, a Communist by default (everybody during Tito’s reign in the former Yugoslavia was a Communist or was sent to Goli Otok, the Naked Island or Yugoslav version of Alcatraz) —was possessed by Satan while visiting his aunt in the village of Blato (Mud).

My ears perked up.

“Possessed? What do you mean possessed?”

“Possessed. Satan possessed him. He was walking late at night through the village, and he lost his mind, he couldn’t find his aunt’s house until the morning, until the roosters sang.”

This is it, I thought. This is the story. Satan possessed a Communist, a man who didn’t believe in God. Brilliant.

I kept asking my grandmother more about this strange incident but she didn’t know much more. It was almost all my grandfather had told her at the time, some 50 years ago. She did mention that Satan’s goat jumped on some other villager’s horse-drawn cart and began talking to him. (When she said that, I wanted to get up and dance.)

When I went home that day, I asked my father if he knew the “possession” story. He said no, then laughed: “He (Svetomir) was a cunning, cunning man.” What this meant was that my father believed that his father lied to his mother. My father didn’t believe in anything supernatural, let alone talking goats and Satan stealing one’s mind.

My grandfather had a reputation of being a “lady’s man” in his prime, even after he got married and had children. My father thought that Svetomir lied to Ruža to hide the fact that he was with another woman. (I was possessed by demons. Sorry, honey. Always a good excuse.)

Plausible, I thought. Serbian men are infamous for being philanderers. (This is why I married an American.)

Either way, made-up or true, it was the basis for a great fiction story.

Let my readers wonder until the end if he (Svetomir) was really possessed or if he made the whole thing up to hide his infidelity. Take my grandmother and my father as a sample. She believed in the “possession,” while my father thought it was an elaborate lie, that my grandfather used my grandma’s superstitions to get out of a jam.

That’s the reason for the change in the point of view in the story, from first to third and back. I wanted my reader to feel like Svetomir, a bit lost, dizzy, disoriented, maybe caught in a whirlwind.

And while writing The Nymphs, it became clear to me that it had to be an atmospheric story, my reader had to be in the room with Svetomir, and smell the women’s hair, and candles, and slivovitz.

During my creative writing process, the dark-haired, dark-eyed woman from the story, the alleged “mistress,” had to evolve into more than a “floozy.” She had to become a Nymph, or a Vila, in the magical realism spirit of the story. Vilé were beautiful mythical creatures that saturated Serbian medieval literature. Why not transport them to the time just after World War II, when poor, hungry and wounded Serbs still needed something supernatural to believe in, besides what Communists were offering them. (That was, suffer for the greater good.)

And when it comes to the story’s location, I have actually never been to Blato, but I couldn’t imagine it looking much different than the three southern Serbian villages I have known well – Gorčinci, Veliki Drenovac (Big Tree), and Nozrina. So Blato was modeled on all three.

Everything else in the story is craftwork and imagination. I, of course, never met Svetomir’s aunt. There’s no son Joca, but I’m sure whoever seduced my grandfather (i.e. Stanoja) had to be at least part Nymph.

Through a long writing and editing process with my writing partner, Gimbiya Kettering and editor, Michael Walker, The Nymphs eventually surfaced and became the first chapter of my recently completed novel-in-stories, Golden-Grip Gun. The Gun is a multigenerational family saga that follows a cursed, mixed blood Yugoslav family (Petrovic) on a tumultuous journey from Serbian and Croatian villages in interwar Yugoslavia to Washington, DC, at the beginning of the 21st century.

Who would have thought that those villages that my parents used to have to drag me to in tears would become such an inspiration? But as a fiction writer, I am eternally grateful for inspiration no matter where it comes from. And as a token of gratitude for my unexpected and fertile muses, I chose Serbian Orthodox Christmas on January 7th as the date to send my novel to agents, for good luck. Hopefully, a Nymph will be around to help.

Marija Stajic is a Serbo-Croatian-American writer, journalist, linguist, and the author of three books of poetry. She has a BA in linguistics and literature from the University of Nis (Serbia), and an MA in international journalism from American University. She studied short story writing at the George Washington University and the Writer’s Center, in Bethesda, Maryland and playwriting at HB Studios in New York City. She is a recipient of the 2013 Undiscovered Voices Fellowship of The Writer’s Center, in Bethesda, MD. Her work has been published in The New Yorker, Gargoyle, VLP Magazine, Lunch Ticket, Epiphany Magazine, Writing Disorder, Orion Headless, Gloom Cupboard, Imitation Fruit, Inertia, Thick Jam, Circa, Yuan Yang, Burning Word, The Doctor T.J. Eckleburg Review, and Defying Gravity, a collection of short stories.