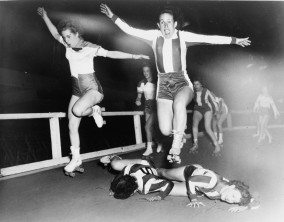 I don’t mean to imply that I often use formal prompts. Mostly the prompt is just an idea that comes from my own head or from a thing that I see or notice — whatever first gets me thinking about a story. In the case of How to Bet on the Roller Derby, it came from a class I was taking: “The Structure of Short Fiction,” taught by Ron MacLean (a great teacher and great writer). Ron knew of a contest for stories about roller derby and he urged us to write one. It was a running joke that turned into a sort of motif for the class. Nobody did it. Then, finally, I did. Unsurprisingly, that first draft did not win the contest. But I kept working on the story.

The most satisfying stories that I ever write start with a voice. In this case, I thought about my prompt (the roller derby) until the voice emerged — the voice of a man obsessed with the roller derby. When I’m in this stage, I don’t feel like I’m writing; I feel like I’m listening. I’m figuring out how the voice sounds, what it’s up to.

Aha! Desires are essential. Once I figure out what the character wants, I can find the story.

Except it’s never that simple. Maybe I’m doing something wrong, but at this point, there are always multiple, conflicting, and confusing storylines. My character wants many things. And all of them turn into separate, tangled-up subplots: the problem with Stinky, the problem with Christine, the problem with Johnny, the obsession with roller derby itself… Some plot lines seem too easy. Some too hard. Some conflict. Some are just plain idiotic. When I get to this stage, I realize I’ve let the character babble on for too long. There’s too much happening, too little sense, and I’m lost in it.

When I reach this great big mess, I’m ready for workshop.  Outside opinions on the story help me to see which threads of my tangle are interesting — which plot lines are worth pursuing and which ones aren’t. I don’t always agree with my readers or take their advice, but it’s good to know what they think. This stage, for me, is like throwing spaghetti against the wall and seeing which strands stick.

But I got an odd result when I took my roller derby story to workshop:

Allie: I’m the writer. I’ll tell you how it works.

Erin: Yeah, I’m pretty sure this is just wrong.

Allie: My story, my rules.

Ginny: We like the confidence, Allie, but it’s time to do some research.

I hate to research. I would much rather make shit up. It’s fiction, after all. And, much of the time, I get away with making things up. I wrote the first draft of the roller derby story knowing nothing about the roller derby. And I think most of the energy of the story derives from that pre-research time: I got the voice, the character, the desires, the way-too-many plot lines. But something was missing. So I turned to the Internet and, very begrudgingly, I did a small amount of research. It was awesome! I discovered that the shapes and patterns of roller derby are very interesting. And not only did I find them lovely, I noticed they had a lot in common with some things that were already happening in the story.

I mentioned earlier that I had these competing plot lines. I often end up with such things in early drafts — sometimes I manage to bring them together, but often I have to cut out the extras. In early drafts of the roller derby story, they were fighting with each other in really awkward and unreadable ways. But once I understood the rudimentary rules and patterns of roller derby as a sport, I saw that the battling plotlines could mimic those patterns. So I worked to make the structure of the story feel, at least to me, like each plot line was skating in a big circle around the rink. With each lap, the reader would get a little bit more information. And frequently, as happens with skaters in roller derby, one plot line would pass another.  I have no idea if the story feels this way when you read it—but it’s what I thought about as I teased out the structure of it.

Then I spent a very long time reworking everything. I tend to reach points with my stories when I need to put them away. I get sick of them, have every word memorized and none of it means anything anymore. If I wait a few months (at least), I can see them in new ways and rework them more meaningfully. I did that with the roller derby story many, many times.

Then I got drunk and decided it was done.

Allison Wyss was born in Fort Wayne, Indiana. She earned an MFA from the University of Maryland and now lives in Minneapolis, where she’s working on a novel. Her stories have appeared or are forthcoming in The Doctor T.J. Eckleburg Review, [PANK], Metazen, andMadHat (Mad Hatter’s Review).