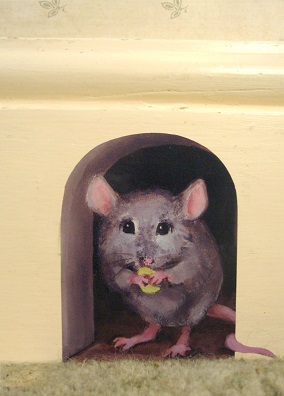 Subject: That one night in which Justin thought roasting a rodent was the most rational idea, ever.

Yes, Justin set a mouse on fire tonight. And yes, the mouse was alive at the time of the burning. Earlier in the evening he asked for another mouse trap, because he saw another mouse in his apartment—the second one of the night. I gave him a trap, and then a few hours later I hear him and Tucker manically screaming. And out comes Justin from his apartment holding up the mouse trap, only this time the trap didn’t kill the mouse, but just got its foot, and so the mouse was dangling from the trap and squirming about trying to free its little pink paw. I told Justin to go put the mouse outside, NOW, and instead he went back into his apartment, lit up his stove, and set the mouse on fire. (Side note #2: as a preventative measure, should we consider replacing the youths’ gas stoves with electric ones?) Justin’s reasoning about setting the mouse on fire was that he wanted to put the mouse out of its misery. Why he didn’t think that burning a mouse is, in fact, a type of misery, I do not know. Tucker stood next to Justin in his kitchen, looking fascinated as the fur burned, and I went into my office and closed the door to try and comprehend what just happened.

As I write this, the entire building smells like burnt mouse. Even on the third floor—in fact, Abby called the office to tell me the third floor smelled like something was burning. After going up to the 3rd floor and confirming that yes, the whole building smelled like burnt mouse, I went back into Justin’s apartment and asked him what he did with the mouse. He said he threw it in the dumpster outside. I told him that he could expect his case manager to talk with him about this incident tomorrow, and Justin didn’t understand what the big deal was. I didn’t even touch on the subject of how it’s just not okay to set living things on fire, and instead just said “fire hazard.” He shrugged his shoulders and said he still didn’t get what the big deal was. (Side note #3: Could we start providing a weekly class for the youth about empathy and correcting distorted thoughts? Or perhaps provide the youth with weekly individual therapy sessions?)

So that was that.

However, in the hours leading up to this incident there were other issues going on in the building that involved Justin.

Pre-burnt mouse, Justin and Rebecca were screaming at each other in the hallway, because Justin believed that Rebecca broke into his apartment last night and stole his Playstation 3 remote control. (Side note #4: Jeanette, this is what the phone call from Rebecca at 2:30am was regarding. And sorry about that. She grabbed my phone from my desk when I was talking with Crystal about her underwear, and she found your number and called you before I realized what she was doing). As I was saying, Rebecca called Homeless Youth Transitional Living Residency supervisor Jeanette while I was in the office speaking with Crystal about how she should not walk around Broadway at 2:30am wearing nothing but her tight pink tank top, the hem of which hits just a few inches below her underwear (Side note #5: She’s wearing neon orange underwear today. Should I include that detail in the nightly communication log so we can monitor if she is working on her goal of doing laundry once a week?) I told Crystal she had to put clothes on, and she asked why. I said, “we make you wear shoes in the building. So of course we’re going to require that you wear pants as well.” I talked with her a little bit about how lately she has been scared to walk around Broadway at night, scared she’s going to get jumped or something, and so why would she wear JUST A TANK TOP to go walking around Broadway?

She said it wasn’t any of my business.

But back to Justin. So I was in the office talking with Crystal about her flawed fashion choices when Rebecca and Justin were arguing, and then Rebecca called Jeanette. After she left her message, and I was able to wrangle my cell phone out of her hands, (Side note #6: could we include in our budget for the next fiscal year cell phone hip holsters?) the situation de-escalated soon enough as Rebecca and Crystal went upstairs and Justin and Tucker stood in the hallway outside of my office door quietly talking.

Rebecca and Crystal came down a little later. Crystal had pants on (!) and Rebecca apologized for getting so angry about Justin’s accusations of the theft of his Playstation 3 remote control. She says she did not steal anything, and was angry because now gossip will spread throughout the building that she is a thief. Therefore, Rebecca has requested that we look at the security camera tapes tomorrow morning to prove her innocence, and to put this issue about her innocence on the agenda for our next tenant meeting (Side note #7: can I add another item to the agenda? I would like to speak with the youth about proper mouse trap use, as well as proper condom use. Crystal and Rebecca have been grabbing from the cookie jar the free condoms we provide for the youth and filling them with water in order to throw water balloons at the neighbors. When I arrived on property this evening, I noticed about three dozen broken condoms lying in the neighbor’s front yard. I believe in last week’s teaming with Crystal we addressed this issue. She seemed receptive to our concerns at the time. However, now Rebecca is joining her in this activity, so perhaps we need to discuss this issue with all of the tenants in order to specifically inform the youth that tenant violations will be issued when an improper use of prophylactics occur). We can discuss the tenant meeting agenda tomorrow after the morning Mental Health First Aid training. I think it would be a positive thing to state in the tenant meeting that Rebecca was not involved in the disappearance of Justin’s Playstation 3 remote control, if the security cameras do indeed confirm this.

Rebecca eventually dropped the argument between her and Justin over the location of the Playstation 3 remote control around 2:35am. So, as I started to perform my closing tasks for the night, the energy in the building quickly became calm. Rebecca and Justin had stopped yelling. And Crystal had put pants on. And then the girls had staggered sleepily upstairs. And Justin was yawning. And Tucker was looking very tired, too.

And then five minutes later there’s a mouse on fire.

(Side note #1 and only to Eckleburg readers: all names and identifying information in this email were altered in order to maintain confidentiality)