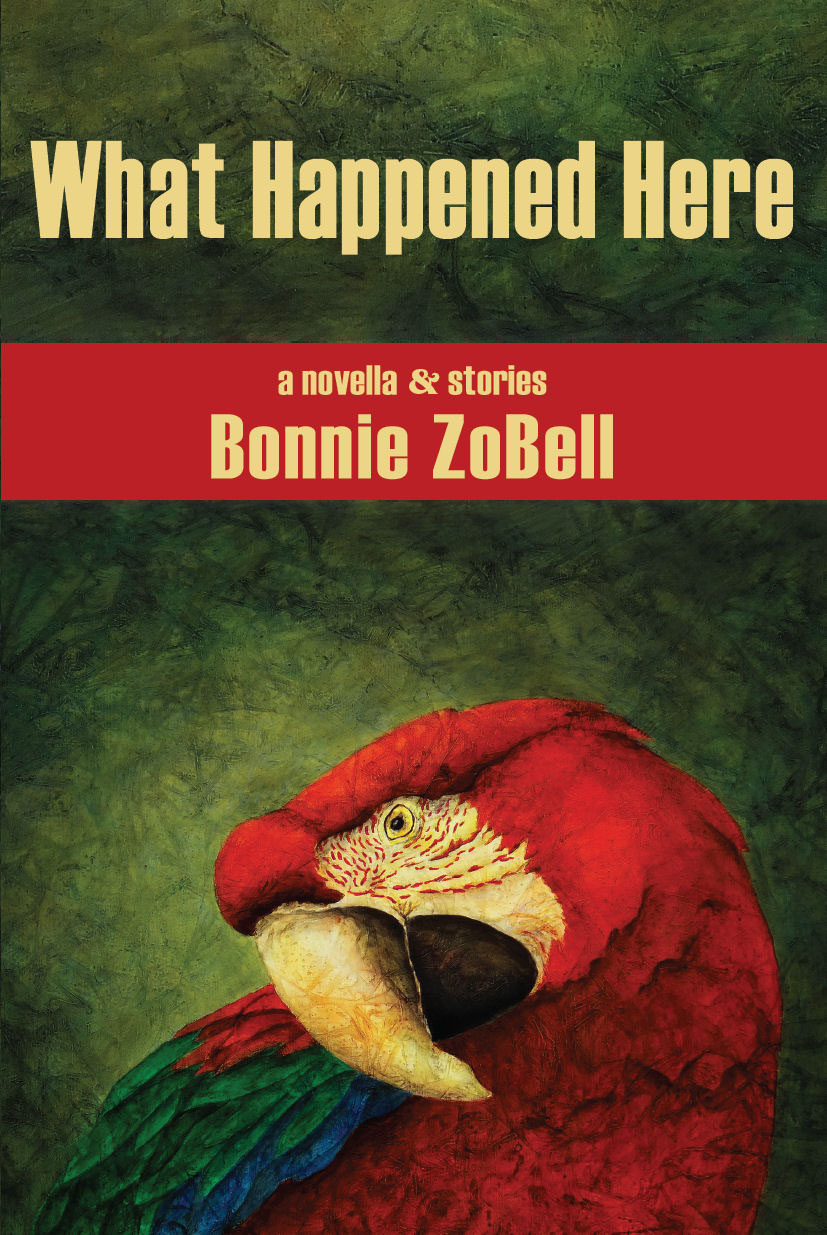 What Happened Here by Bonnie ZoBell

What Happened Here delivers a wildly different cast of characters living on the same block in North Park, San Diego, site of the PSA Flight 182 crash in 1978. The crash is history, but its legacy seeps in the stories of the neighborhood’s inhabitants, bringing grief, anxiety, and rebellion to the surface and eventually assists in burning clean the lives of those who live in the shadow of disaster. Amidst the pathos of contemporary life, humor flits through these stories like the macaws that have taken to the trees of North Park. The birds ensure that there’s never a dull moment in the neighborhood, and their outrageous colors and noisome squawks serve as constant reminds of regrowth.

~ Lionel Shriver, author of Big Brother: A Novel and We Need to Talk about Kevin, winner of the Orange Prize.

“Bonnie ZoBell’s linked novella and story collection, What Happened Here, made me feel as if I’d lived all my life in San Diego’s North Park, whose inhabitants live and work in the long shadow of the 1978 airline crash that decimated the neighborhood. What is most extraordinary is the ease with which ZoBell at once accumulates the layers of a novelistic narrative and offers us beautifully written, compact stories with lives of their own. Like Krzysztof Kieślowski’s Red or Haruki Murakami’s After the Quake, ZoBell allows us a complete picture only through a nimble narrative triangulation between the many characters and stories. The hard-fought and bounded truth we see here is, I think, the truest kind of truth.”

“Bonnie ZoBell’s luminously intersecting stories of artists, musicians, teachers and assorted shimmering misfits in a North Park neighborhood that happens to be the site of a historic plane wreck, beautifully chronicles the struggles of the living to survive–emotionally and physically–in the shadow of wreckage and ghosts. Her characters’ connections, madnesses, kindnesses and demons are startlingly poignant and resonant.”

~ Gina Frangello, author of A Life in Men: A Novel

“What Happened Here is a wise, lively celebration of the temptations we endure and the small victories we achieve, both individually and communally, under the shadow of transcendent events. Both her characters and her prose are fiercely alive. Their rage and spiky humor, their tenderness and forgiveness, weave through these fine stories like movements in a symphony.”

“Readers may argue over whether the greatest strength of Bonnie ZoBell’s What Happened Here is the prize-winning prose or the full sympathy with which ZoBell gives life to her delightfully varied cast of characters (sour, sweet, canny, sexy, you name it; all of them linked by a gruesome tragedy). Cherry-pick later; first time through, read the whole big-hearted collection from beginning to end to savor how perfectly the romance of the last story informs the vision of the whole.

“I love the moment in each of these geode-like stories when the surface cracks open and what lies beneath—the clear quartz of kindness, the dolomite of tragedy, the chalcedony surprise of unlikely love—at last comes into the light.”

The Virgins by Pamela Erens

Aviva, from an upper-middle-class Jewish family, and Seung, the son of Korean immigrants, arouse envy on Aviva’s arrival at Auburn Academy in 1979 when their voracious love develops instantly. Class and cultural disparities fascinate, as does the peek inside East Coast boarding schools. Aviva resolves to make herself different; Seung, harassed about his race throughout middle school, suddenly shines because of his brilliance. Friends guard against dorm supervisors during hours-long visits between the two. Obsession permeates this novel—the two with each other and others with them. Erens’s gorgeous writing will cause you to lose sleep: you know something terrible is going to happen, but you don’t know what it is.

Bio:  Pamela Erens’s second novel, The Virgins, was published by Tin House Books in August 2013. It was a New York Times Book Review and Chicago Tribune Editors’ Choice and was named a Best Book of 2013 by The New Yorker, The New Republic, Library Journal and Salon. The novel was a finalist for the John Gardner Book Award for the best book of fiction published in 2013.

Any Deadly Thing by Roy Kesey

One of our best contemporary writers, Roy Kesey, has done it again. His previous book, Pacazo, set in Peru, superbly written, and brilliant in its structure, moving smoothly back and forth between scenarios to get at the utterly human narrator who could never tell us his feelings directly. Any Deadly Thing is equally brilliant but a whole different animal, which speaks worlds about Kesey’s range. The brutal tales in the new collection, set all over the world, hit you where it hurts, in the soul, the heart. The masterful wit he uses while doing so makes this a must-read.

Roy Kesey‘s is a writer and translator currently living in Maryland. His books include Any Deadly Thing, Pacazo, All Over, Nothing in the World and an historical guide to the city of Nanjing, China.

Bodies of Water by T. Greenwood

Her best novel yet, and oh what a page-turner it is! With stunning prose, Bodies of Water details two traditional mothers living across the street in a lonely Massachusetts neighborhood who fall in love and must keep it a secret from their husbands, children, and the rest of the world because of their fear of a different kind of life. Amidst the tension, beautiful imagery of the Northeast landscape, and the drudgery of their suburban lives, the risk is worth. The two women have never felt so full and free . . . until it all falls apart.

T. Greenwood is the author of seven novels. She has received grants from the Sherwood Anderson Foundation, the Christopher Isherwood Foundation, the National endowment for the arts, and, most recently, the Maryland State Arts Council. Five of her novels have been BookSense76/IndieBound picks. Bonnie ZoBell’s new linked collection from Press 53, What Happened Here: a novella and stories, was released on May 3, 2014. Her fiction chapbook The Whack-Job Girls was published in March 2013. She has received a National Endowment for the Arts fellowship in fiction, the Capricorn Novel Award, and a PEN Syndicated Fiction Award.  She received an MFA from Columbia University on fellowship, and currently teaches at San Diego Mesa College. Visit her at www.bonniezobell.com.