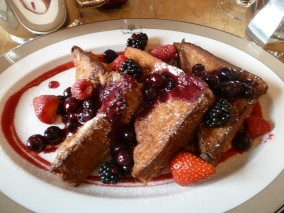 “Tell me what we were doing the morning we were leaving Cancun,” my husband asks, a week after we returned from a vacation.

“We were waiting in the hotel bar for the van to take us to the airport,” I reply.

“Did we order French toast?”

“So I didn’t have an argument with the waiter about the French toast?” he persists.

“Nope.  That didn’t happen. We had breakfast in our room earlier,” I remind him.

“I thought we were in the bar and we ordered French toast,” Tom mused, “but the waiter didn’t bring it. Then he came and gave us a bill. He said we had to pay because we had already checked out. I started arguing with him. ‘You didn’t even bring us the French toast, and we are going to miss our van.’” Tom’s imagined frustration with the waiter made me smile.

“Nothing like that happened,” I said calmly. You must have dreamed it. Sounds like you were anxious about the van, about getting to the airport on time.”

“I was. But then three orders of French toast appeared,” Tom continued, crossing that line between reality and dream without a pause.

“Did we have time to eat it?” I asked, smiling.

“Of course not,” Tom huffed.

“Were you very hungry?” I teased.

Then he smiled, knowing my occasional frustration with his digressive journeys, and said, “It’s not that I don’t remember what happened. It’s just that I need to add footnotes.”

Tom and I are in our Manhattan apartment, and he is asking the kinds of questions that makes me pause and pay attention, so I can figure out just how his mind is working. Twenty-two years of Parkinson’s disease is starting to take its toll. A few days before the French toast incident, we had been swimming in the Gulf of Mexico’s coral reefs. Swimming is something Tom can still do, even though he can’t walk steadily. Before the excursion, we were given a lecture on how fragile the reefs were, how susceptible to chemicals such as sunscreen and all the other pollutants we are producing.

I watched the guides plop Tom’s thin frame into an inner tube and ease him off the boat into the water. I thought about my husband’s fragility, wondering what pollutants were responsible for his condition, but of course I know the causes are more complex. His mind sometimes appears to be eroding the way the coral reefs are quietly losing their substance. Small amounts of data seemed to be shifting location and drifting into the larger aquatic flow inside Tom’s head where they take on new shapes, offering creative, if dislocated, readings of events.

The inevitable course of the disease notwithstanding, I find myself curious, but also anxious, about how best to find a bridge between his world and mine. I imagine that the changes in Tom’s brain are perhaps shifting geological plates, something not as final as what is happening to the coral reefs, suggesting the hope of a new formation, overlapping connections, not just irretrievable loss.

Weeks can go by with barely noticeable differences in the way we are living our lives; then, suddenly, Tom says something that reveals an abyss between us. It’s disconcerting to be confronted with a partner who suddenly seems to be standing on a different land mass, or not on land at all, but in a fast-moving stream or turbulent ocean, leaving me behind. I’ve learned, though, that it’s best not to tell Tom he is imagining things, because, for him, in that moment, they are real. When he tells me, for example, that there are people in our room, I go along with the story, asking him to describe them, then noting when he tells me they have disappeared. I remind myself that the doctor says it’s not dementia but medication related confusion, usually only temporary. So far that has been true, but the looming fear of changes, in the secret places of Tom’s brain that I cannot see, remains.

Although my husband is a relatively quiet person when awake, when he is asleep, he is loquacious. Sometimes he gives a lecture to a class. And in the best dreams, he is laughing and smiling, even opening his eyes as if he is trying to invite participants in the dream to come to share a glass of wine on our balcony. Recently, however, he described a frightening dream. He was being transported by strangers to a place where he would not be able to navigate, as the destination required climbing up a rocky mountain. He flailed in his sleep, shouting at his captors to stop. Of course, Tom immediately understood why he had a dream that demanded an impossible physical feat. The disease haunts him, even when he is asleep.

What interests to me, as his partner, in addition to the actual terrain of his excursions, both sleeping and waking, is my job: how I can successfully bring him back to common ground. Chatting about daughters, grandchildren, or pointing to something silly our miniature schnauzer is doing, does not always work. But if I ask him an intellectual question, another part of his mind immediately goes into gear, and the professor husband with whom I have shared ideas for twenty-five years emerges intact.

Recently, I asked him to explain Michel Foucault’s “repressive hypothesis” to me. After a moment’s careful thought, he said, “What Foucault means is that the things that we dare not do control us.” Marveling at the succinct clarity of his answer, and the sly way Tom always inserts his interest in what is culturally forbidden into conversation, I also think, sadly, about all the things my husband dare not, cannot, do anymore.

It remains immensely comforting, though, that Tom’s deep intelligence is intact. He pursues my question about Foucault, launching into a more elaborate explanation:

“In The History of Sexuality, Foucault describes a French boy’s dalliance with a local dairy maid and his consequent interrogation by the police, a typical teenage event becomes a ‘perversion’ in the eyes of the French government so they arrest the boy. The French philosopher uses the story to show how our desires are pathologized.” “Feminists,” Tom adds, in one of his “footnotes,” “critique Foucault’s position, arguing that what the boy did was nothing short of rape.”

Suddenly, once again in the “classroom,” my professor husband gives an explanation of a theory and then a memorable bit about recent scholarship. His response to my question is not exactly a return to common ground, at least not for most people, but for me it is a sign that cognition is working.

Tom is retired but still teaches one class a semester at the college where he has spent the last thirty-eight years. Students haven’t complained, so the momentary shifts to an alternate reality, the “footnotes” he adds to some of our excursions, do not seem to occur during class. If he can still talk to students about Don Quixote and Hamlet and ask them to write about the difference between these two heroes’ understanding of madness and reality, surely his “coral reefs” still have plenty of dendrites. Recently, however, even though his students wrote him a warm letter of praise at the end of the semester, his college decided it was time for him to stop teaching.  Tom was annoyed at the bureaucracy, and personally hurt, but I was relieved for his physical safety — traveling back and forth six blocks alone on his scooter had caused me much anxiety.  But now a new set of concerns arose about the need for stimulation — how would he remain intellectually active?

These events lead me to ponder the terrain of our future. On a day Tom has been teaching or working on a half-finished manuscripts on self-portraiture in the Renaissance, I feel that we are on terra firma. Other times, when Tom asks me a question that make me feel more like I am standing on a diminishing piece of ice in the arctic. I have never stood in the arctic, but I imagine it to be firm yet somehow porous. It is unclear just when a large piece of ice might sheer off into the ocean. As I wrestle with these images, I realize that while Tom is crossing into realms whose foundations are uncertain, I remain on dry land, relatively speaking anyway. And yet, we are together, perhaps closer than we have ever been, trying to navigate this stage of our lives together.

Most of the time, Tom’s excursions only last a morning, or, at most, a day, and then they vanish, a brief snow shower, and we begin again, exchanging ideas about Obama’s decision to cut Medicare or whether Hillary will run for president in 2016, and I am lulled into complacency — until the next question. Like the one about the French toast we didn’t have in Cancun.

Phyllis van Slyck teaches English at LaGuardia Community College, City University of New York.   She has published essays on Henry James and on pedagogy in a variety of academic journals including American Imago, Change Magazine, Criticism: A Quarterly for Literature and the Arts, The Henry James Review and Profession.  She is currently writing memoir pieces on family matters, in particular, a series on living with a partner with Parkinson’s Disease.  Email: slyckvan@gmail.com

Phyllis van Slyck teaches English at LaGuardia Community College, City University of New York. She has published essays on Henry James and on pedagogy in a variety of academic journals including American Imago, Change Magazine, Criticism: A Quarterly for Literature and the Arts, The Henry James Review and Profession.  She is currently writing memoir pieces on family matters, in particular, a series on living with a partner with Parkinson’s Disease.