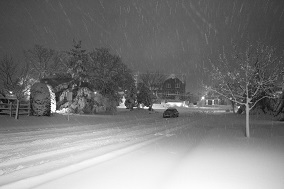 I’m fascinated by glass, how it’s made of sand and heat – elements of the world – yet the glass itself, when it’s formed, seems other-worldly. Indeed, it seems like a solid, but is more in its viscosity a liquid.

How can something transparent be both window and barrier, the thing that allows us to see beyond the confines of house, office, and car, yet separates us so fully from that same beyond?

To be able to see clearly but not touch. To be so close but yet not part of. It’s easier to want what you see but can’t touch. Can’t yet open.

When I think about glass, I also think about snow. Perhaps this is because I grew up in western New York, where people spend many months of each year looking out of windows at snow. Perhaps, too, snow is something like glass: snow makes a place seem other-worldly, and it is both beautiful and dangerous. Intricate in design, yet treacherous when it accumulates on surfaces.

One snowy night when I was fourteen, Lauren was driving her parents’ minivan to musical rehearsal with me and our friends, Sam and Pete, in the passenger seats. So much snow had come down, so fast, that Lake Shore Drive wasn’t yet plowed. The distance ahead of us stretched gray in the streetlight, and the few cars ahead crept along through what seemed a long passageway. Lauren’s hands gripped the wheel at ten and two. We leaned forward and peered out the windshield.

Not long ago, nostalgic for my snowbound hometown, I re-read Davy Rothbart’s essay, “Human Snowball.” The story takes place in wintry Buffalo as the characters drive around the city in a stolen SUV. On every page, the reader is certain something awful will happen: a 101-year-old man will die; someone will lose their job; the police officer who pulls them over will discover the vehicle’s provenance; the protagonist will never find the girl he came to city for.

But in Rothbart’s story, for one snowy night, all is right with the world.

If such a snow as the night of the minivan fell where I live now, in southeastern Pennsylvania, everyone would stay home and the schools would be closed. But that night, and always it seemed in western New York, snow was excitement, a challenge, a new world to conquer. Sixteen-year-olds learned to drive in the snow, and everyone grew up watching their parents drive in weather that today makes me shudder. On Christmas Eve, my parents would drive my brothers and me an hour north, past Buffalo and into Grand Island, to my aunt’s house. The way there would be clear, but many years on the way home snow would be falling fast, the depth already halfway up our station wagon’s tires. My father steered slowly through the whiteness where abandoned cars lurked like whales, Moby Dicks, on the shoulder. As much as he and my mother voiced their concern and told us to sit back and be quiet, I never felt afraid. We had done this many times: warm and dark inside the vehicle, cold and white and night outside, and that thin sheet of glass in between.

Always, we made it home.

The night Lauren drove her parents’ minivan, we were rehearsing for Grease; I was Sandy and Lauren was a Pink Lady, and Sam and Pete were Greasers. In real life, though, we were nothing so cool as Pink Ladies and Greasers. We were honor roll nerds who lived for band or chorus or both.

But the nights that our musical packed the high school auditorium, we were more than cool. The theatre lights illuminated us, and the audience applauded in the dark, and the crumbling town on Lake Erie felt, for a few nights, like possibility. We didn’t see how small the auditorium was, or consider how worn the fabric of the seats. How low the town’s buildings. How lonely a van on a snowy road.

For a few nights, most of us forgot that we wanted out of that rust-belt town. We were young and naïve, though of course we thought otherwise. We wanted to be people we weren’t, which explains why we spent so many nights devoted to musical theatre alter egos.

A few never left at all. I can’t remember any of my friends cracking up their parents’ cars in the snow. In our town, the trains destroyed more cars. Every few years, a car flew off the city pier and into the water. Several times, I knew the names. All small towns have their share of tragedy, and they hurt no less than tragedy anywhere. Sometimes they hurt more because the place is so small, because everyone knows everyone else, because the place is a place where it seems nothing of consequence can happen.

The night I was allowed out in a minivan with my seventeen-year-old neighbor driving while the snow came down seemed when it happened the most exciting moment of my life.  And in some ways, it still is:  heart in my throat, my eyes full of a tired, familiar beauty, and the question of will we make it hanging in the air. All of it cradled by the town I would later think let me down just because it was small and shabby and poor. But that night I didn’t think that way. Cynicism and the city hadn’t ruined home. The crumbling facades, empty storefronts, and small houses with plastic sheeting over the windows instead of curtains were just the way things were. As a child I accepted this as the world because I was part of it and hadn’t really been anywhere else. Later, in college, I saw that town through a new window. It looked like a hole of misery, and I felt somehow superior because I left it for good.

But the truth is I now live in a place where window treatments are discussed as a matter of utmost seriousness, and nearly all of the houses have been renovated to historic standards. The fabric on the seats of my children’s elementary school auditorium smells new, and the floor’s carpeting is never threadbare. Worn fabric, the parents would agree, would be an embarrassment.

We weren’t embarrassed in the van. We didn’t know how to be. We lived in shabby houses, we shoveled the driveways because no one’s parents could afford a snow blower, and we drove around in rusty, late-model cars.

It’s not my old home, the snowfall, or a rust-belt ethos I long for. But I do miss the kind of not-seeing that allows a child to be satisfied when she peers out the glass window at the world, a world she thinks she knows, a world often covered in snow.