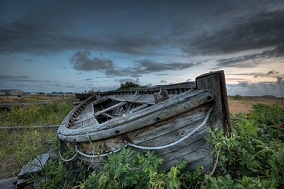 This afternoon a rejection note appeared in the corrugated metal interior of my mailbox. This particular note wasn’t unexpected, nor was the appearance of a resounding No thank you anything new. And so I was shocked and ashamed by the hurricane of grief that roared up from my feet as I read the words in middle of the country road.

The force of the loss reminded me of the Robert Redford film “All Is Lost,” in which a man in the middle of the Pacific Ocean abandons his devastated sailboat in a circular orange life raft. As he drifts, the camera pans slowly away, from both above and below, until the raft disappears in the middle of blue space. That sense of hopeless insignificance is what I felt when I read that letter, and perhaps the hopelessness engulfed me because it is exactly what I work against when I write. Your see, I believe in something perhaps best expressed by Virginia Woolf in her short memoir, “A Sketch of the Past.” She muses, “…it is a constant idea of mine; that behind the cotton wool is hidden a pattern; that we – I mean all human beings – are connected with this; that the whole world is a work or art; that we are parts of the work of art.”

And so I am not used to the sense that, despite the universe around us, it feels like we are utterly alone. I’m unaccustomed to the very real happenstance that a freighter or a cruise ship can pass near enough to touch –– though it’s so large and unwieldy that no one notices you in your life raft as you wave a flare and in your hoarse voice call out Here, here, I’m over here!

That letter in the mailbox made me feel like woman on a raft for other reasons, too. As Rebecca Solnit says in The Faraway Nearby, “a book is a heart that only beats in the chest of another.”  On good days, I convince myself I’m not alone in the life raft of art-making because with me are all of the books I’ve read, those other muscular, beating hearts who now live in mine. Books, I suppose, are my kind of communion, a host of saints, and I hope it is not wrong to want more than to read those books, those saints. I want too to talk back to them, have my voice join all the others who have cried, Here, I’m over here! Together, we could bring our little rubber rafts together, and in my mind we become a vessel of our own making, an unwieldy but sturdy little shape in the ocean. But on other days, the discouraging days like today, I hear Solnit’s words as a warning that all of this writing is fine and good, but none of it is alive if it isn’t read by someone else.

Then I begin to wonder what risk I might have to take in order to capture the notice of others. At the end of “All Is Lost,” when Redford’s character has run out of water and hope, he sees one night a pinhole of light on the horizon. He readies his last flare, but in a desperate, crazed moment, he flings it aside and sets his journal and survival guide aflame. Fire engulfs the raft within seconds, and the man half falls and half jumps overboard. This is when he gives up. This is when he and the viewer know that his story – or his life, which is both bigger and smaller than a story – is over. He sinks down, down, down into darkness, so far that you’re sure he’s dead. The camera thinks this, too, and he becomes smaller and smaller in the sea. Then the lens pans up to the burning halo of raft.  A dark shape of a boat creeps into its light, and Redford begins to kick, struggling upward until, in the last frame, his hand grasps another hand reaching toward him.

It has to be said that when I watched the film, I muttered, Dude, you’re stupid, when the character set fire to the paper in the raft. Yet the fire saved him, though only just. What is that line, between risk and futility, when you write? When and how do you set it all aflame and have it be noticed rather than destroy you?

And here is where I come back to Solnit, who gives me courage in addition to fear. The flame, the uncertainty, inspires in her possibility: “What if we only wanted openings, the immortality of the unfinished, the uncut thread, the incomplete, the open door, and the open sea … The quest is the holy grail, the ocean itself is the mysterious elixir, and if you’re lucky you realize it before you dock at the cup in the chapel.” She knows it is impossible, for any artist, to see where their work will lead. And it is wiser to embrace this ambiguity than to resolve it. Yet we try to reach certainty anyway, like a person in a lifeboat seeks land or another ship.  We do this because we need, in some way, to find our place in the midst of the universe.

For writers, without our stories, little rafts lashed together with faulty memory and suffering and bits of information we might call fact, we cling to a space of meaning, even if no one ever finds us there, in the middle of the deep blue sea.