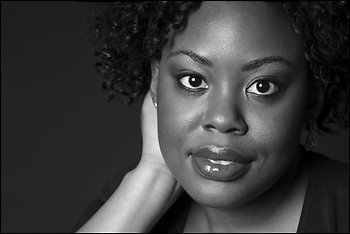 Eckleburg: What is most rewarding about teaching the craft of writing?

Kalisha Buckhanon: Working with others on the intrinsic and natural tendencies to play with language is a way for me to stay humble and messy as a writer, because the creative artist industry and professional writing business demand supernatural confidence and near-perfect work in order to survive them.

I was a paid teacher long before I was a paid writer, as a college work-study student working with children in Chicago or a teaching artist in Harlem as I worked on my M.F.A. I really enjoy showing people of all ages how to get better at something.

I have also received more than I ever thought I would as a young girl- turned-woman who had this very calming and pleasurable habit of writing and typing; I want to see more people who are able to say the same. For every additional writer who feels excited and disbelieving of how well things work out for them in this, the world loses a cynical and disappointed soul who is unable pass on his or her gifts and dreams.

Eckleburg: What was/is the most rewarding experience as a student of writing?

Kalisha Buckhanon: As an M.F.A. student at The New School in New York City, I learned that writers who have participated in an exterior publishing industry and consider themselves to be career writers are indispensable to new and future writers, as well as literature overall. Most writers who teach have no agendas of profit or corporate bottom lines or promise of fame by association. So, students like I once was can really trust their feedback and insights as driven by love for literature and writing, and no more.

I would never have shopped my M.F.A. thesis around the publishing industry but for my thesis advisor, who thought it was a phenomenal potential novel I would have never seen as such. She took it to a friend who had started a literary business, and it was sold. This launched my author career, which continues to be rewarding 10 years later.

Eckleburg: What is your favorite writing exercise or habit?

Kalisha Buckhanon: I am teaching Spirit of Writing, and my favorite habit from this course is: “Write Every Day.”

She has taught writing, humanities and English through PEN American Center’s Prison Writing Program, Kankakee Community College and many inner-city schools, summer arts camps and library initiatives. She is a member of Phi Beta Kappa academic honor society and Sisters in Crime organization of women mystery writers, with appearances for the group as a true-crime commentator on Investigation Discovery Channel’s “Deadly Affairs” and for TV One’s new series “For My Man.”

Kalisha has an M.F.A in Creative Writing from The New School in New York City, and a B.A. and M.A. in English Language and Literature from University of Chicago.