The road stretched straight and flat before me, like you’d see in a sports car commercial or a Dennis Hopper movie. On either side, the land spread wide and open. Not quite flat—with a bit of a roll here and there—dotted with juniper and other unidentifiable desert shrubs. I had been traveling out West for almost six weeks since leaving my home in West Virginia, staying with friends in Albuquerque, visiting National Parks with my husband John, and searching for someplace in this vast region that I could call home. I spent Christmas at the Grand Canyon, celebrated the New Year in Joshua Tree National Park, and camped for two cold nights in the Mojave Desert. But nothing had felt like the real West until then—that moment on the long drive from Albuquerque to Roswell, New Mexico (don’t ask) when I looked around and saw…nothing. Or rather, no one.

Don’t get me wrong—I love the National Parks. In fact, as we jostled for position at the South Rim overlooks on Christmas Day among the Asian, European, Latino, and other tourists, I confessed to John that America’s National Parks are what I’m most proud of about our country. Make America great again? It already is. It always was. All we did was have the smarts not to mess parts of it up. Parts of it.

Since then, I had been searching through northern Arizona and New Mexico in a borrowed Fiat and obsessively Googling communities in Colorado, Idaho, Utah, and Nevada. My goal? Find a nice small town with a nice small house where John and I could plant our not-so-nice small footprints and spend our weekends traipsing through wildlands. When I looked at a map and saw all that glorious green National Forest and parkland surrounding western communities, I figured somewhere out there was a town for us. But as I explored those potential sites on the ground, I found mostly strip malls or ghost towns—chain stores or boarded-up buildings. Other places looked promising, but the specter of future fracking or the legacy of past mining cautioned me away. With the Trump Administration promising more fossil fuel drilling and less environmental oversight, my misgivings grew.

I was getting discouraged. Where was the West I remembered? I had gotten my first taste of it decades ago, standing on the edge of the Beaver Rim in central Wyoming. Until then, I had spent all of my twenty-five years on the East Coast. Eastern deciduous forest and Atlantic surf were my natural habitats. But that summer, as I looked out over the breathtaking emptiness of basin and range, I felt an awe that I never could have imagined. Now, with a few more bumpy miles on my body’s odometer, I wanted to feel that again.

In 2016, the Center for American Progress, in conjunction with the consulting group Conservation Science Partners, released a report showing that between 2001 and 2011, the American West lost a football field’s worth of natural area to human development every two and a half minutes. Because of urban sprawl, energy and mineral development, roads and transmission lines, the landscape that inspired me so long ago has become more and more elusive.

Somehow, on that lonely drive to Roswell, among the desolate plains of eastern New Mexico, I found my awe again. The land surrounding me wasn’t famous for its scenery or valued for its minerals or preserved for posterity. It was forgotten—except, I suspect, by the ranchers who somehow make their living from sparsely scattered herds grazing over a vast parched landscape that can’t handle many head. I saw a few cattle here and there, an occasional car on the highway, and a mystical island of snow-covered mountains off in the distance.

Maybe that’s the answer, I thought. Find the forgotten places. Soak in the vastness of a western universe without fast food, souvenir shops, drill rigs, or parking lots by going where no one else will go. Fill the soul with a satisfying emptiness that few can find on Earth these days.

But as I finished my drive, reality hit. Forgotten places can get pretty lonely. No friends to dine with, no community to embrace, no airport to whisk me off when work demands my presence. Best to find the forgotten places on foot, with a pack on the back and a burning need in the belly.

My search for a new home continues. I’m beginning to suspect that wherever I land might not be awe-inspiring. But at least I know that, for now, some of those forgotten places still exist. That emptiness matters. And I know that, if I explore far enough, I can capture that breathtaking feeling of vast wildness once again, alone in the middle of nowhere.

Photo at the top courtesy of John Amos. 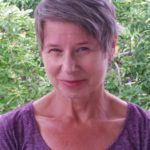 After years as an environmental analyst relying on scientfiic facts and figures to make her case with policymakers in Washington, Amy Mathews Amos realized the power of story to bring about change. She enrolled in the non-fiction writing program at the Johns Hopkins University to develop her storytelling skills and completed her MA in 2013. She now works with the nonprofit organization COMPASS, training other scientists to communicate effectively with journalists and policymakers, and has published her stories in the Washington Post, Pacific Standard, Scientific American, High Country News and other outlets. She wrote this essay last year while transitioning from the DC area to a new life in the American West. She and her husband now are building a humble, yet awe-inspiring, home near Santa Fe. See more of her work at amymathewsamos.com and follow her @AmyMatAm.