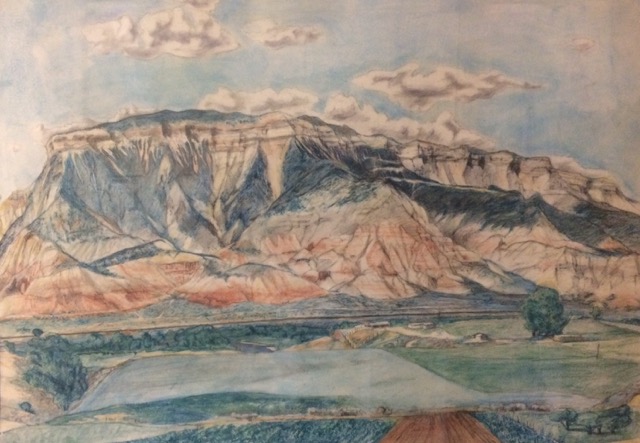 We’d bought the beer and ice at a gas station near Parachute, Colorado. I stood with the pump while my father acquired the goods. I was a couple years off the buying age, although I had a decent fake in my wallet. I laid a bed of ice in the cooler and tumbled the cans in, keeping two for the ride. I cracked his open as he got in and held it out as he put us in gear. He said: “Goddammit, son. Don’t hand me my beer yet. Wait till we’re on the road.”

For the trip up he’d bought a half dozen maps for us to fumble through. They meant nothing to me. I didn’t actually remember the area, only the monumental yellow mesa, sparse landscape. Only the smell of old tires and the stubbornness of barbed-wire fence gates. I remember tying up horses, or stumbling into the ghost-white cold and taking a shit in an outhouse in the middle of the night.

A poet, maps are mostly useless to me. These ones detailed every switchback between Parachute and Rifle, places my father ran cows as a teenager. The stated goal was to find an old shack with a corral where a couple of hands could get a few winks if they couldn’t get off the mountain before dark. For that, maps are pretty worthless anyway.

The maps did lead us along a dirt road where we only had to open one barbed-wire fence gate. I’d opened a few of them before, mostly on trips up to visit my grandfather Otis Murray. That’s how I knew it was my job as passenger to get out, struggle with the post and loop for a few minutes, cut my hand, say a few oaths to all such fences, and wait while he drove on through. Repeat process to close the gate, then hop back in. “Cut your hand?” he said. “Meh, a little,” I said, sucking the blood. “They’re hell for a kid to open,” he said. “I’ve always hated ’em.”

My siblings and I had gone up on numerous trips to the Western Slope as kids. It was quite a drive from the big city. We’d pack into the wood-paneled Ford Taurus: me, Dad, brother Chris, and sister Katie. Sometimes my mom would brave it, and she’d say to me playfully, “You and me is city folk.” Most trips were designed to see Dad’s side of the family, but we’d usually end up doing something obsolete like fix a fence at the old ranch house or paint something thirsty like a crappy old barn or a front porch.

Once, Dad took only the boys to paint my grandfather’s horse trailer and learn how to do something, some real work. According to him, we didn’t know how to do anything. That was because we lived in the city. On the way up, brother Chris said, “Dad, is a horse trailer goddam or son of a bitch?” This was a legitimate question. Everything was goddam or son of a bitch, but how could one tell which? Dad thought for a minute and said: “That’s a good question. We’re goin’ up there to paint a goddam horse trailer, and when we’re done we’ll have painted the son of a bitch.”

This trip was different, though. I was back from college and things had changed. Grandpa Otis had passed (“that’s a good man they put in the ground there”).  The ranch house had been sold, along with the horses and cows. Some crook had stolen most of Dad’s horse tack during a garage sale. Most of that stuff wasn’t necessary anymore, since we didn’t live on the Western Slope. We lived in Denver. Actually, this was probably the first time up that Dad didn’t bring a pistol.

One wasn’t needed on this trip and would’ve been useless—unless for letting off steam with a few shots into the sagebrush. Grandma Berniece could shoot the eye out of a bird flying, to use one expression, and Dad himself needed one shot to make change out of a quarter at 100 yards. I never saw him level a firearm at anything living, but I did once see him swoop over the side of the horse he was riding—and I mean riding angry and at full canter—pick up his cowboy hat off the dirt where it’d fallen, and set it back on his head, all while cussing a litany that’d make a sailor blush. It was amazing.

Fine, so there is some embellishment, but sometimes running cows isn’t much to talk about. Out here I knew well enough that the cowboy life had given way to the rancher life. No dirty button-ups and sixteen-hour trail drives, no sleeping in a blanket roll in a cold rain. It was all buggy bosses duded up with a new Stetson and a Ford F150, biggest goddam truck you could find. In fact, most of the land we were going to hike on was owned by some oil company that hadn’t yet scoured it.

We parked the car—and the beer—outside of a fence gate that was now owned by Exxon. It said “No trespassing.” Luckily the land we were on that day, the very brush beneath our boots, hadn’t been raked and drilled yet. Somewhere, Dad said, there was a creek, a small corral, and a cabin that he remembered from his childhood. So we yanked open that fence gate—and cussed at it for sticking in the dirt—and started looking for the cabin.

I wished I’d worn more comfortable shoes. We’d been walking a long way no matter the metric, whether hours or miles, whether silent confounded stretches or soliloquies with Dad shaking his head and saying, “Well I don’t know if I recognize this or not. That over there does look familiar.” That was mostly false alarm. He’d point along the line of a decent-size creek where cows would’ve whet their whistles. “There isn’t a stupider animal in the world,” he’d say. Sounded about right to me, since the one obstacle on the dusty road up was some dumb son of a bitch cow standing in the middle of the goddam road. Didn’t move till we’d hopped out of the car and had a conversation with him. The conversation went like this, “Move out of the road, godammit, Yaa!!!” The cow said, “Moo,” and stayed put.

Our feet hurt and we still hadn’t seen the cabin. Nor had we headed back. “No, no, I think it’s around here. Let’s just get around the bend.” What was funny is I did get excited when he thought he recognized something. I’d start asking him questions that typically drew laconic replies. “So Dad, what’s the longest ride you ever had to do? Who is Charlie Sandoval? Did you ever have to shoot a cow?” “Longest ride? Hell I don’t know. Charlie Sandoval was a worthless son of a bitch. Why would I ever have to shoot a cow?”

I’d like to say I had a different response when we reached that nondescript range where Dad spied an empty creek bed. I’d actually put my hands on my knees and said: “Dad, I’m done. I’m heading back. You can do what you want. I want a cold beer.” But he had some weird defiance in his voice too. It wasn’t that of an adult. It was kind of giddy and secretive and out of character, like the time when he told Katie and me—after trying unsuccessfully to fix something in the house—that small tools were conspiring against him. He said: “Do what you want; I’m goin’ around this bend.” And he did. So I waited.

That is until he starting running—skipping?—along the dry creek. He’d hit the bend at the horizon of my vision. Too stunned to say anything, I eventually caught up and saw him smiling and looking at it. There it was, a dilapidated, crumbling abode maybe 10 by 15, roof collapsed as a trampled cornfield, broken windows. Next to it slumped a makeshift corral, big enough to hold a night herd. The corral gate swung open so far it stuck into uneven ground, which is every pain-in-the-ass gate. I mean, it was a real piece of shit, let’s be real. But we were happy to see it.

We didn’t use the map on the way back. You just walk where you’ve been. By that point, the beer’s gotten good and cold. Beer tastes better when it’s cold like that.

Colored chalk drawing at the top of the page by Connie Murray, Gregg Murray’s aunt.