Five o’clock on Sunday and I’m trying to figure out, again, how to get out of going to church. My husband and I watch television in the living room, savoring those last moments of the weekend before Monday begins to breathe its heavy hand over us. Feeling Jason’s eyes, I peel myself from the couch and hobble to our bedroom in my best old lady impression. I collapse into bed, tugging unmade blankets over my body and peep between wisps of hair to see if he has followed. Hearing footsteps, I begin to whimper.

The bed dips next to me. “You okay?” His voice is soft, his hand warm, rubbing up and down my back.

“Headache.” I curl into the covers and ask him to close the blinds.

I try not to smile, only nod.

He comes back with a glass of water and pills. I make a big production of wrestling my body from the sheets, and act like holding the glass makes my arms ache, before I crumple back into bed. Hoping I look both sweaty and cold at the same time, I shiver and pull the blankets tighter around me. He pushes the hair back from my forehead.

“Why don’t you take a nap until church?”

Every Sunday, I dread the moment when my husband will say the ‘C word.’

I try not to grimace, though odds are already against me—once the C-bomb has been dropped, there’s an eighty-percent likelihood I’ll be singing my Amens soon. We usually attend the six o’clock mass on Sunday evening, the last of the weekend, so my schemes are simple, though time sensitive: distract Jason until six, making it impossible for us to get to mass on time. I’ll put in a movie or suggest a drive—in the opposite direction of church. Sometimes I claim cramps or stomachache. But this Sunday he’s remembered. I curse, wondering if my fake headache was premature. Now I must rely on my single greatest weapon.

It’s a desperate attempt, the one I know if I use too often, he’ll catch on. But if I can keep him distracted until after six, it’ll be worth it.

The window blinds make strange shadows across our bodies. Our hands fumble with one another’s clothing. Sex during the day, difficult for him to turn down, but I know this. We roll around on the bed, my eyes going to our bedside clock. I am hypnotized by that clock, moving my hips to the rhythm of that green winking colon, appearing, disappearing, appearing, disappearing. I exhale hard, frustrated by the excruciating slowness of time, urging those green numbers to change. My hand lifts, daring to caress its snooze button, tempting time to go faster, faster. The numbers expand, change into more and my smile becomes a gasp. At five before six, I am conscious of Jason’s closed eyes and with the same longing that time should speed up, I tell my hips to slow down. Slow down. I don’t want to blow this with a quickie and time enough for a mad rush to church.

Six ten and I am more confident, imagine the cross carried to the altar, the choir singing. Our breaths come fast and I reassure myself that marital love, after all, is a spiritual experience. At six twenty, it’s too late and I close my eyes, shiver, and—yes! We’ve missed church again.

Shadows are heavy over our bodies when Jason’s slightly dilated eyes focus on mine.

“Honey, we forgot to go to church.”

“Oh.” Still trembling, I manage to look both surprised and penitent, trying to beat back that ever persistent little bitch, Catholic Guilt, constantly whispering recriminations. “Sorry.”

I’ve succeeded in stealing another day from God. 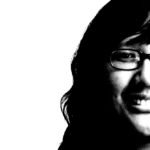 Jen Palmares Meadows is a Filipina American writer whose work has appeared in publications like Denver Quarterly, Memoir Journal, Kartika Review and elsewhere. She received her MA in Creative Writing at California State University, Sacramento.