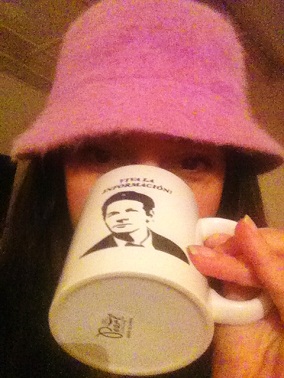 Assistant fiction and assistant prosetry editor Gaby Romeri describes how writing is like a maddening brew, how she wants work that seeps into her psyche, and if you’re not careful she may just set you off on a scavenger hunt through a series of tubes to discover some of her hilarious political satire.

Gaby Romeri: I met Rae in grad school at Johns Hopkins in D.C.; we shared an all-time best class ever – experimental fiction with Professor Peabody, humble genius and patron saint of feminist authors and Gargoyle magazine. He pushed us relentlessly, artistically, past literary boundaries and comfort zones, but in a comforting, nurturing classroom. I think it was then that Rae begat Moon Milk Review, bringing me and some talented others in to help raise it, and it became pretty spectacular. Moon Milk transformed into Eckleburg, inspiring boundless more talent to create this kaleidoscopic work of living, sapiosexual art.

GR: Since Moon Milk I’ve been an associate fiction editor, my strength being the anally-retentive business of copyediting. Now that Eckleburg has abundant staff with ridiculous talent, I hope to try my eye at prosetry. Rae inspires and forces me, despite my schedule, to keep slaving away for the creative. Damn these muses.

GR: A bit of everything. A synthesis of surprise. Sometimes, aside from the great stories (also as the not-so-great ones), there are some that blow your marble clean off, that enter your psyche, that like a ward of the state become a part of you for evermore. I made a label for these particular submissions called Freaking Fantastic!

GR: Karen Heuler had this story named “Beds“, a comedy of tragedy so Kafka sweet that I still must return to it. A small piece Ben Loory dedicated to “Ray Bradbury“ and “Loteria“ by Lisa Marie Basile—both as different as good and evil—won my heart for the same underlying reason of magic. Zach Galifianakis as” Miss Spring 2012“—Eckleburg’s first-ever centerfold—genius Hilarius.

GR: I’m an associate editor for Maryknoll magazines, a society of do-gooding saints. I write for their English and Spanish publications, telling stories of the mission work they do around the world. Keeps me pretty sane. I also write political satire, but under an alias so I can at least keep my day job, if not my rights or mind. (Note: Your W.A.S.T.E. system is more important than ever; use it to discharge pesky NadSAt blockage, or relieve yourself via the PRISM method. See your Doctor TJ if this condition persists.)

GR: Sometimes soberly. First a kind of brewing process: I research it to death and write myself indecipherable notes based off disturbing ideas. Things I most fear or need to hear, voices that want amplifying. When I can, I eat it, sleep on it, let it invade my dreams. That way when confronted with the cynical blank page the story rushes forth on its own like Che Guevara. To see it through requires my special powers of hermit-like concentration. I’ve found it’s impossible to be in two places at once and I do relish the time travel.

Gabriela Romeri, originally from Argentina, is a bilingual writer and editor for Maryknoll magazines, an associate and prosetry editor for Dr. T.J. Eckleburg and a writer of political satire and other things. She has an MA in creative writing and literature from Johns Hopkins and studied screenwriting and film studies at Hollins University. She feels torn about speaking in the third person and is far more comfortable behind words than among people. Though she prefers a good fantasy to most reality, Ms. Romeri remains a masochist political junkie who still searches for the hidden trapdoor or eject switch from this suicidal planet we call home. It has to be around here somewhere.