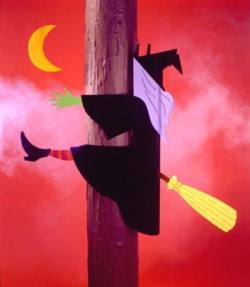 My dad said the Christian bands didn’t know when to end a song. I agreed. God seemed to go on forever.

I wasn’t necessarily raised Christian. We were more of holiday Christians—going to church on Christmas Eve and Easter. We always disregarded denomination and just went to the church that was closest to our house. I think one might have been Baptist. Or perhaps Methodist. I wore a white dress for these occasions, not to look pure, but because it was the only dress I owned.

Though by the time I was fifteen I had accumulated a ton of long skirts in my wardrobe, because I wanted to be a witch. Or, “practice Wicca,” as I thought was the better term. It didn’t sound as hippie woo-woo. I wore the skirts, because I thought Wiccans wore long skirts that magically swept along the ground as they danced and twirled around in their scared circles. I wanted that, too.

I tried listening to what I thought was Wiccan music—chant and Gaelic music and what not, but like the Christian songs, I also thought they went on for too long. So I claimed my favorite singer at the time as my goddess—Natalie Merchant. She seemed spiritual enough to me. And her songs were really short.

I remember being naked in my room at night, playing her songs and twirling around in a circle with the wand I made—a stick with a small fauz-crystal strapped to the end of it with purple yarn. Purple not because its magical meaning is psychic ability, but because purple was the only color of yarn I had. I don’t know what I was trying to invoke with the wand and the nakedness and the turning around in circles, but perhaps I was after some feeling inside of me about being connected to the earth.

Because Wicca to me was more about the earth, poetry, and candles than gods and spells of any sorts. Bide these Wiccan laws ye must with perfect love and perfect trust. I still remember the opening lines to the Wiccan Rede. I never learned the Lord’s prayer.

What turned me away from Christianity was a sermon one Sunday about how all of this New Age stuff was ruining God’s word. This was during my two month stint when I was in eighth grad and trying out Christianity. But during this time I also lived near a forest and a creek and wondered about what the magical life had to say to me. After that sermon I went home and made my wand and never went back to church. I didn’t like how “God’s word” sounded more important than the earth. Plus, lighting a candle seemed a much more efficient spiritual practice to me than listening to Christian rock music.