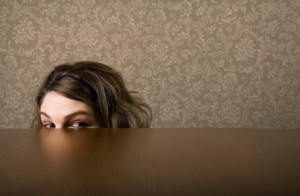 She has always been good at disappearing As a kid, I figured she’d become the next David Copperfield. Now, she’s dead serious about moving to either the German countryside or a remote island inhabited by flightless birds. She thinks it’s brave to run, but I feel she’s being a coward, feel as if she needs to un-hide from life more.

I scare her when I talk about connecting with other humans, when I say no husband and no children mean dying alone in Bavaria or in the middle of the Pacific. Perhaps she doesn’t think about these things as she dreams of being surrounded by flightless birds. Perhaps she doesn’t really want to stay still, stay hidden. I mention the option of marriage, since I believe it requires semi-seclusion behind walls and doors.

“Making babies in the dark,” I smile.

She recoils when imagining sharing a house with a man. “I suppose he expects me to cook,” she groans.

I suggest marrying a chef or someone who frequents the farmer’s market.

“Will he like pasta?” she asks, now curious about this idea of a man I have entered into her mind.

She lightens up after I tell her he’ll be busy working and she’ll be by herself most of the day. I remind her if she does end up with a chef, he’ll be at the restaurant all night and will snooze away the sunshine hours.

“I suppose you’re right,” she admits, “as long as this future dude respects my privacy.”

She says she has a good recipe for salmon and may bake it every two weeks. But she has her conditions. She will only do the cooking if he doesn’t expect her to answer the door, if he pretends she’s a ghost on holidays and weekends, if he gives her the space to hide.

Kirby Wright was born and raised in Honolulu, Hawaii. He is a graduate of Punahou School in Honolulu and the University of California at San Diego. He received his MFA in Creative Writing from San Francisco State University. Wright has been nominated for two Pushcart Prizes and is a past recipient of the Ann Fields Poetry Prize, the Academy of American Poets Award, the Browning Society Award for Dramatic Monologue, and Arts Council Silicon Valley Fellowships in Poetry and The Novel. BEFORE THE CITY, his first book of poetry, took First Place at the 2003 San Diego Book Awards. Wright is also the author of the companion novels PUNAHOU BLUES and MOLOKA’I NUI AHINA, both set in Hawaii. He was a Visiting Fellow at the 2009 International Writers Conference in Hong Kong, where he represented the Pacific Rim region of Hawaii. He is the 2011 Artist in Residence at Milkwood International, Czech Republic.

One Reply to “Recluse”