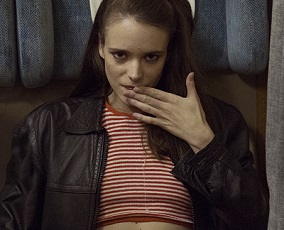 The film opens in a dark alley, with Joe (Charlotte Gainsbourg), her face bruised and bloodied, splayed on the grimy pavement. A gentle, bookish, sixty-something man named Seligman (Stellan Skarsgård) stops to help, but she refuses to allow him to take her to the hospital. When pressed about what she needs, she finally requests tea with milk, which he provides, along with a shower, some clean pajamas, and a warm bed in his Spartan apartment. Snuggled in, Joe tells a kind of reverse, perverse bedtime story—of her life as a nymphomaniac.

So begin the flashbacks, in which Stacy Martin plays the teenage and twenty-something Joe. There’s Joe at fifteen asking a boy with a moped (Shia LaBeouf), “If I asked you to take my virginity, would that be a problem?” There’s Joe competing with her best friend B (Sophie Kennedy Clark) to see who can rack up more men during a train ride—the winner gets a bag of candy. There’s Joe being confronted by an enraged wife (Uma Thurman) who demands to show her children “the whoring bed.” The scenes are raw and mathematical, with counts of sexual acts and partners tallied in transparent numbers on the screen.

All this graphic sex of course created quite a buzz, particularly the fact that the top halves of the actors were digitally fused with the bottom halves of porn body doubles. Even more controversial is the film’s gender politics. Is “Nymphomaniac” the latest evidence of Lars von Trier’s intense misogyny, as a number of critics have claimed? He so thoroughly and routinely brutalizes his heroines, in films from “Dogville” to “Breaking the Waves,” that accusations of woman-hating have become par for the course. Or does the movie show him to be a feminist in disguise? Or just a brazen exhibitionist?

I can’t begin to know the notorious director’s philosophy, though misanthropy wouldn’t be a bad guess. More than a statement on gender, “Nymphomaniac Volume 1” felt like a statement about the ugliness of life. There are some beautiful shots in the film, as when Joe and her beloved father (Christian Slater) stare up into ash tree leaves sparkling with afternoon light or even when Joe is silhouetted walking glumly against squat grey buildings. But the visual aesthetic only makes the grim brutality feel more grotesque. This is true of the squirm-inducing close-ups of genitalia, but also of the scenes of Joe’s father in the hospital, writhing in agony or strapped down in soiled sheets.

Throughout the film, Joe tries to convince Seligman that she is an unusually immoral person and he consistently argues that while the nature of her transgressions is distinctive, their essence is actually quite normal, quite human. If Seligman acts as the authorial voice, then perhaps the emptiness of Joe’s sexual experiences are meant to represent humanity’s actions at large. Joe says at one point that we are all just filling time as we wait for permission to die. There are few moments in Joe’s life that I would care to recreate, but this message makes at least one appealing: to crawl into bed with a cup of tea.