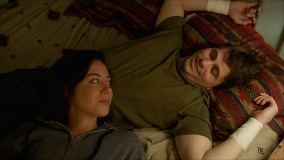 “About Alex” is not a perfect film, but it is a near perfect relief from the summer blockbusters. There are no explosions, no car chases, no teenage vampires or comic book characters. And there’s just a little blood: stains from the titular character’s half-hearted suicide attempt run down the tub onto the bathroom floor. But mostly, as Alex’s college friends gather in his old farmhouse to offer support when he returns from the hospital, there is talking.

With its brooding nostalgia, it’s easy to see why “About Alex” is often referred to as “The Big Chill” for Millennials. Ben Kenigsberg of The New York Times calls the echo “distorted,” while Robert Abele of The Los Angeles Times quips, “‘The Big Chill’ it isn’t.”  Even the characters acknowledge the tribute. Sarah (Audrey Plaza), an aspiring chef who is convinced that what Alex needs is mothering, remarks that the gathering is like an old eighties film and suggests naming a stray dog Jeff Goldblum, who starred in the original movie. While the set-ups are nearly identical—a half dozen old friends reunited by the suicide / attempted suicide of a character named Alex—Writer / Director Jesse Zwick puts a contemporary stamp on his characters’ tangled lives.

Most of the social commentary comes from the caustic mouth of Josh (Max Greenfield of “The New Girl”), a perpetually outraged Ph.D. candidate who would rather rail at the world than live in it. He’s angry that his generation came into the job market just as the bubble burst. He’s angry that every moment must be captured on an iPhone and instantly uploaded to Facebook and Instagram. Most of all, he’s angry that his friends are pussyfooting around the reason for their gathering, hiding in politeness rather than thrashing out why Alex was Tweeting about death and why the rest of them failed to notice. Greenfield walks a smart line between idealism and cynicism, making Josh simultaneously callous and sincere.

While Josh’s counterpart in the “The Big Chill” was a drug dealer (albeit a high-end variety), most of the eighties gang was professionally successful, if unfulfilled: doctors, lawyers, T.V. stars, businessmen. They had sold out and were reaping the rewards of furs, fast cars, and summer houses. The friends in “About Alex” are instead struggling with student loans and wobbly job prospects, with the exception of Isaac (Max Minghella), the quiet, sensible type with obscenely expensive shoes, big-money investments, and a Republican voting history. While the times and finances have changed, the theme remains eternal: lives that aren’t turning out quite the way they were planned.

“About Alex” has one important element that its predecessor did not: namely, Alex (Jason Ritter). It’s a smart twist that lends emotional punch to the film’s underlying structure. Alex isn’t simply a device to bring long-lost friends together; he’s a person and, like the characters, we want to know why he did what he did. Ritter plays the role with the gentle charm he is known for on “Parenthood,” but undergirding the sweetness is a near frantic vulnerability. When Ritter’s doe eyes start darting and his voice trembling, the movie takes a jump from casual Mumblecore entertainment to something more striking and vital.

“About Alex” does not maintain its resonance throughout. Lines and character arcs dance perilously close to cliché. And making the gang a decade younger (twenties rather than thirties) undercuts the weight of their regrets. But as Alex chases his best friend’s car, close to distraction and despair with the thought of losing the person who matters most to him, we get a glimpse of what drove him into that bathtub. That moment is worth the price of admission, as it gives its audience something both classic and atypical, something sharp and poignant, that “The Big Chill” could not.