When I was twelve my little sister clogged the toilet. A vigorous and often over-enthusiastic butt-wiper, she was known to unravel half a roll at a time; on a weekly basis, she’d choke the drain with fistfuls of our family’s off-brand toilet paper, after even the slenderest tinkle. This, however, was something else: a full on clog, and floating there, a thrice coiled monster, shockingly out of proportion for a fifty-pound kindergartener. That she had the courage to come to me, despite her evident shame, still astounds me (it remains a touchstone of our friendship: once you’ve fessed up to something like that, minor infractions like trying to make out with your boyfriend or crashing your car seem inconsequential). My solution — never a winning one, I’d be told a thousand times after that day — was to try and flush it away. And, of course, I was left, clutching my horrified sister’s shoulder, watching the water come up to the porcelain lip, turds churning like logs in a flooding river, streaming towards disaster. A minor miracle: the toilet did not overflow, and I wisely chose not to try flushing again.

Instead, we went to get our father.

Now, dads are not good with feminine bodily issues. I cannot remember my father ever using the words ‘vagina,’ ‘menstraution,’ or ‘breasts.’ He certainly never used any of the coarser terms we heard in school (although this may have been, in part, his Lutheran aversion to the profane in general; our mother told us that, while working in his garage, he sawed off the tip of his thumb, and she heard him shout ‘dangit.’). When he gave us the ‘birds and the bees talk,’ he literally discussed the act of pollination, leaving us confused — for several months — until our mother sat us down and explained the metaphor and, with a half-sad chuckle, our father’s rationale for deploying it: nothing made him more uncomfortable than the idea of his own daughters having real sexual parts.

But a bowl full of his daughter’s crap came pretty close.

Our father, who was reasonably handy outside the house — he’d built us a tree-house, and a patio for our mother, and in general was good with things with engines or that could be sawed or hammered — was always a bit out of place indoors. Cooking, to him, was like the miracle of the Eucharist: somehow, a saltine cracker became the flesh of Christ. How, precisely, was not the issue. Likewise, somehow or other, two cans of black beans, a Spanish onion, dried rice, and a package of raw chicken became Mexican Night. How was beyond him, and would remain beyond him until his death — and likely after that — and this was something he simply accepted.

All of that to say: plumbing fell amongst the domestic mysteries of faith. Our mother, who was by no means a feminist, still made it a point to mock — carefully and lovingly — our father’s ignorance: ‘He fixed the sprinkler system for the Hurleys, and he fixed the storm drain in the driveway, it’s like as soon as the pipe hits the wall of the house it ceases to exist!’ Perhaps it was that, as the lone male in the house, bathrooms and kitchens — where the plumbing was, by and large — were so clearly not his territory. Or perhaps it was that, as a child, our father had lived for some time in a West Virginia house without running water (this was not something our father ever spoke about, though we were occasionally told, cryptically, to be grateful for many of the things we took for granted, even disliked: school, baths, the dentist). In any case, to compound our father’s horror — the swollen sewage threatening to slosh over onto the floor — there was a kind of ambushing helplessness, as if a skilled mechanic had been whisked from his shop and pressed into service at a hospital, forced to assist on a challenging surgical procedure.

Our father floundered momentarily, but — to his credit — he managed to be somewhat tactful (my sister was, at this point, hiding in her room, crying into a stuffed animal). He said, loud enough to be heard throughout the upstairs, “ah pumpkin, well, these things happen in older houses, nothing to worry about.” That we lived in an ‘older house’ was an occasional bone of contention, one my parents ignore for weeks and then suddenly pick up and gnaw on for hours. We knew enough to understand that ‘older house’ was a nice way of saying ‘poor,’ and that the things that went wrong with older houses — leaking roofs, creaky windows, clogging toilets — didn’t go wrong in the ‘newer houses’ of more successful fathers. That our father would admit both to owning an ‘older house’ and to the house’s shortcomings was one of those things that, years later, you suddenly and painfully recognize for what they were, in this case: magnanimous and selfless on a nearly supernatural level.

Then he went downstairs and collected our mother’s measuring cups, two large Pyrex ones that she’d won by guessing how many jellybeans they contained as they sat in the Five and Dime display window. My father handed me the half-quart cup and took the full quart one for himself; cautiously, but with a firm grip on the handle, he lowered the cup into the brimming toilet, and then quickly emptied it into the tub. He looked at me and, I remember, I couldn’t quite read his expression: it was the awesome and godlike opacity of adults, especially of parents and most of all of fathers. There was no hesitation between thought and deed, no error, no indecision. If you couldn’t understand them, it was on you; it was your failure to understand, to interpret. Even now, I’m not sure: he was demonstrating that he did, in fact, know how to handle the situation; or, he wasn’t sure, but was confidently faking it, and was waiting to see if I’d buy his performance; or, he was in a blind panic, a state that, for a certain kind of older, privately religious man, looks less like fear and more like quiet contemplation.

At the time, though, it was just my father, self-evident, looking down at me, so I followed suit; when you can’t understand, you can at least imitate. I stuck my cup into the toilet –

arm fully extended and head leaning back away from the stench — and then dropped its payload into the tub. We both did this three or four times, the brown liquid running the drain, leaving the sad, waterlogged shit half-cloaked in layers of soggy toilet paper, laying in the bottom of the bathtub.

Finally, my father said, “there we go,” and stood up. He leaned over and flushed the toilet. It made a sick, gurgling noise and filled, again, nearly to the brim. A few remaining pieces raced around in a brown whirl. My father sighed, looking at the clogged toilet, then at the muddy clumps in the tub, then at the two dirty measuring cups. He said, “crap.”

I think that’s when I started laughing. I’d been giggling, nervously, on and off, during the whole thing, but now I was laughing hard. My father, shaking his head — usually a sign he was smiling, on the cusp of laughing and trying to conceal it — made a coughing, chortling noise. Then he lost it, laughing aloud.

My sister, thinking we were laughing at her, started wailing from her room. We went in to calm her down, and she shouted at us, pink faced, “you are both so mean!” Then, between sobs, she continued to shout, making noises less and less like words, and more and more like animal bleats: “you…are…sargh… meeeaaaaa…” Our father, try as he might, could not stop laughing. My sister, pushed beyond discrete emotions, pulled a blanket over her head and began screaming: long, sharp, inchoate bursts of emotion. My father sat next to her, still quietly chuckling, and patting gently her form under the blankets. Finally, she calmed down, enough to poke her head out and ask meekly: “Did you fix it?”

I shrugged and managed, between giggles, “sort of.”

My sister threw off the blanket she’d been huddled under and went into the bathroom. Her voice carried into the bedroom: “Oh my God, dad.”

Our father wisely refrained– his usual injunction, when my sister would say this, or even ‘Jeez,’ would be a sharp, ‘Lord’s name,’ softened by ‘pumpkin’ — and stood quietly at the bathroom door. My sister, jaw hanging slack from her face, looked around the bathroom, eyes coming to rest on the two measuring cups, sitting in the tub, a good half-inch of sewage in each one. Without turning she said: “Mom’s gonna kill you.”

Our father nodded slowly, then turned to me and asked, with a kind of shocked, desperate openness: “what will we do?”

It was as close as we’d ever be.

Benjamin Schachtman is an ex-patriot of New York City, currently hiding out in an anonymous town on the Carolina coast. He’s a fiction editor and contributor at Anobium Literary; his work has appeared in print in Anobium, The Conium Review, the Dig Boston, Confingo (UK), and the Bad Version, and online at Slushpile Magazine, Ozone Park Review, Foundling Review, and others. Visit him at BenjaminSchachtman.com. 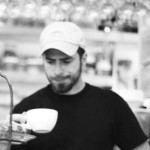