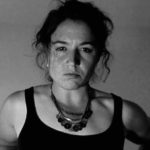 Kate Scarpetta grew up in Northeastern Pennsylvania and spent her youth playing sports and climbing trees. She attended Princeton University where she studied under Joyce Carol Oates and Edmund White. Her work has been featured in the Brooklyn Review, SpltiLip, Word Riot, BULL and 14 Hills amongst others. @kate_scarpetta, katescarpetta.com

One Reply to “Pobrecita: A Blanquita’s Guide to Love”