Stream of Consciousness is the total range of awareness and emotive-mental response of an individual, from the lowest pre speech level to the highest fully articulated level of rational thought. The assumption is that in the mind of an individual at a given moment a stream of consciousness (the phrase originated in this sense with Alexander Bain in 1855 and was given currency later by William James) is a mixture of all the levels of awareness, an unending flow of sensations, thoughts, memories, associations, and reflections; if the exact content of the mind (“consciousness”) is to be described at any moment, then these varied, disjointed, and illogical elements must find expression in a flow of words, images, and ideas similar to the unorganized flow of the mind. However, because consciousness is neither a stream nor a thing given to verbal articulation, the stream-of-consciousness technique has become as artificial and convention-bound as any other literary technique, although it may give the impression or illusion of preserving a lifelike resemblance to real consciousness. Joyce’s approximation involved the removal of customary signals, such as quotation marks, hyphens in compounds, and chapter numbers and titles. By moving the written text closer to the realm of speech, which is normally unpunctuated, Joyce gave the impression, in effect, of moving his discourse from the outer world of the reading eye to the inner world of the listening ear…. (Handbook to Literature)

Go to your favorite place—park, restaurant, bar, chair in your backyard. Sit with your journal and pen and close your eyes. Keep them closed and focus on the sounds and smells. When you open your eyes, write the sensory experience around you. When you think of something that seems completely unrelated, histrionic, futuristic or anything else, write the thoughts as they form in your mind. Forget about punctuation, sentence structure, grammar, spelling, just get the thoughts down as they come to you in whatever messy way they form.

Repeat this stream of consciousness exercise each day, as long as you can, so to form a sense of your voice in this freeflow form. 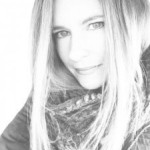 Rae Bryant is the author of the short story collection, The Indefinite State of Imaginary Morals (Patasola Press). Her stories, essays, and poetry have appeared in print and online at The Paris Review, The Missouri Review, McSweeney’s, DIAGRAM, StoryQuarterly, Huffington Post, New World Writing, Gargoyle Magazine, and Redivider, among other publications. Her digital intermedia has exhibited in New York, DC, Baltimore and Florence, Italy. She has won prizes and fellowships from Johns Hopkins, Aspen Writers Foundation, VCCA and Whidbey Writers and has been nominated for the Pen/Hemingway, Pen Emerging Writers, The &NOW Award, Lorian Hemingway, and multiple times for the Pushcart award. Rae earned a Masters in Writing from Hopkins where she continues to teach new media, technology for writers and creative writing and is founding editor and designer of Eckleburg. She also teaches and lectures in the International Writing Program at The University of Iowa, The Eckleburg Workshops and American University where she is currently in the MFA program. She is represented by Jennifer Carlson with Dunow, Carlson & Lerner Literary Agency.