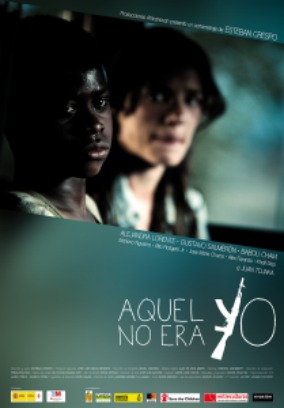 After a screening of Aquel No Era Yo (“That Wasn’t Me”), one of five short live action films nominated for an Oscar this year, my husband asked me if I liked it. “Like” can be a tricky word when it comes to the movies – what exactly does it mean? Enjoy? Relish? Appreciate? Admire? For Esteban Crespo’s film about Spanish aid workers taken hostage by child soldiers, it was an especially hard question because each of those synonyms yielded a different answer.

Enjoyment doesn’t capture the experience of this film, except for perhaps the first few moments when Paula (Alejandra Lorente), her boyfriend Juanjo (Gustavo Salmerón), and their guide (Jose Maria Chumo Mata) bump along the dusty African countryside in an old jeep, joking and singing raunchy songs. That lightness vanishes at a makeshift barricade, guarded by two boys who look like they’re about twelve years old and playing soldier, only the rifles are real. From the moment Kaney (Juan Tojaka) takes aim at Juanjo, watching the film is a sort of torture.

Part of the discomfort comes from raw suspense and even rawer brutality—over the course of twenty-four minutes, there are three identifiable deaths (set against a background of general carnage) and a rape. But the conflict onscreen also created a different kind of tension, an internal one.

The film’s message is patently one of redemption. The scenes at the rebel army camp are spliced with Kaney, now several years older, describing the life of a child soldier to an auditorium full of shocked and tearful students. By way of explaining the atrocities he committed, he tells the crowd, “Being a soldier is not that difficult: either you get used to it or they kill you. The most difficult thing is to get used to living with your own memories and to being yourself again after doing the things you have done.”

Reconciling the essence of a person with his actions is at the heart of the film, and I found myself struggling with the pull between empathy and anger. The filmmakers do not sugarcoat Kaney’s identity as a child soldier—while he is forced into violence by the rebel General, at moments he appears to relish the cruelty. It was the first role for Tojaka, born in Equatorial Guinea, but the sullen pout of his lips and coldness of his eyes are as chilling as those of any veteran actor.

In the time lapse between the events in the camp and Kaney’s speech, wounds have presumably healed or at least scarred over. But for me, the short was not long enough for this settling of emotions. While the film ends in the auditorium, I was emotionally back in the camp’s dust, wondering if I would ever be capable of such forgiveness. I am tempted to fault Crespo for too tidy an ending, but even this hint of sentimentality left lingering questions—an admirable feat for any film, and particularly one on such a difficult subject.

So did I like Aquel No Era Yo? Yes and no. Regardless, I would certainly recommend it.

Emily Turner is an editor at Island Press, where she acquires books on food, health, and sustainability. She has also worked at NYU Press and Academy Chicago Publishers. She earned a BA in English literature from the University of Virginia and is pursuing a MA in Writing from Johns Hopkins University.  She lives in Los Angeles, CA.