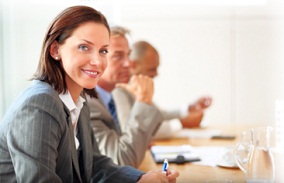 It’s a question we all face as executives at some point in our careers – so, let’s de-holster that Mont Blanc pen, point, aim and fire some straight-talk right into your brain hole: can you take your meeting seriously when a woman is present in that meeting? I can answer that unequivocally – No, you cannot take it seriously. Not at all. Let’s fire off some facts:

Fact: What has happened here is your rival in the office (another executive, a lesser desk-jocky bucking for a promotion, etc.) has set up some sort of dupe meeting, your meeting with the woman present is a clear indicator the actual meeting is taking place on a higher floor of the building and your rival at your company is at that meeting getting (a) a thumbs up from your boss, (b) a title promotion without increase in salary, (c) your job and you have been demoted or fired. You’ve been had, brother.

Now, here are some more facts about yours truly, a bit of a personal resume (forgive me): I’ve met a number of women privately, generally my secretaries, and enjoy them and their companionship, however I do not allow them to take of my essence, which they crave. I do see the value of a woman, in a theoretical sense, and wish them well when I see them in my friend’s homes or when I pay one for intimate relations and murder them. I’m not a homosexual. But, I often kick my feet up on my windowsill and in between calls and meetings I will think of the homosexuals as a group and how fortunate they are to be in an all-boys exclusive club of executives where women are not considered except for companionship in the most platonic of senses. How wonderful the homosexual executive meeting must be – all these dynamic and resourceful males, everyone on the same page and hitting home runs in their meetings and phone meetings.

I share that personal story to show that I am only human and fall prey to the woman sometimes just like perhaps you do, brother. I do apologize for the personal detail and understand that it is irrelevant and beneath an executive like myself to share that and embarrasses an executive like yourself in reading it and I can only hope it did not make you late for your meeting, lunch or phone meeting. Try to consider this as a bullshit, spitball session where we’re just a couple of swinging dicks finishing up an hour in the sauna, talking about Q1 and Q2 earnings, showered in the executive washroom as we talked about expansion into China, had a couple glasses of scotch in the executive clubhouse where we got a bit loose and shared intimate feelings about wanting relations with a woman secretary in the office that we have both kept our executive eyes on, our ties have loosened, we’ve grabbed each other by the back of the neck lovingly and my sleeves are rolled up — all the way up. But I digress.

Okay, let’s get back to cold, hard business and I’ll hit you with some facts to get us back on track:

Fact: Business acumen clouds the mind of a woman and causes her to fall behind her homemaking, womanly gossip mongering, periods, church going and/or baking. Women need the company of other women – they are so fundamentally different from men that in an ideal world, there would be the Male Earth, filled with tall buildings, each floor buzzing with meetings and telephony deal-making and video conference meetings. And then there would be the Female Earth, or Lesser Earth, filled with women, gossip, church going, homemaking and the dreaded period. Men would fly some sort of profit-motivated propelled spacecraft from the Male Business Earth back to the Lesser Female Earth for occasional companionship, procreation (if absolutely necessary) and a warm meal. Why do we deny ourselves what nature intended for us – two separate Earth’s, one male, one female and spinning side by side in harmony? Let’s work towards a kind of long-range Two Earth setup as a reality, and stop mingling women with men in the office of business.

Fact: Occasionally, the language of a meeting can get blue, perhaps the Q3 profits are down, perhaps the Powerpoint slide is jammed – a male executive may shout out, “Terry, your Powerpoint slide is jammed and we’re left with our dicks hanging in the wind!” Completely proper etiquette in a meeting. Makes me honked off just thinking about this shitty Powerpoint slideshow that this douche-bag public-school dropout “Terry” shit the bed on and it’s just a goddamned example. And to be clear, I’ve never been in a meeting this shitty. And for the record, the only Terry I know owns a private jet that refuels mid-flight and he hasn’t landed in thirteen goddamned years, he would not fuck up a Powerpoint presentation, he’s a top-shelf exec and does great phone and conference meetings.

Anyway, a woman hearing “dick” will (a) not understand what a “dick” is and interrupt the meeting asking questions that delay the meeting and make us late for our next meeting, (b) the angry tone can throw a woman into a frenzy – that kind of male emotional outburst released in front of a woman (not unlike the release of male essence) can be shocking for a frail, emotional woman and she would have to be shot to death due to her not being able to live a normal church-going, homemaking life after or (c) her period may start or a, b and c – believe me, I’ve seen it.

Hope that helps. Now, roll up your sleeves, get into that board room and kick some ass.