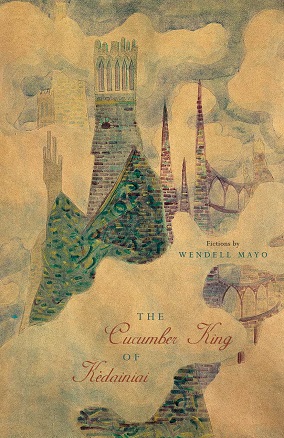 In the title story of The Cucumber King of Kėdainiai (pronounced keh-die-nay), a Lithuanian mafia boss who seeks to conquer the world through black market cucumbers takes two Americans on a strange tour of his castle, a former Soviet storage house. In a similar way, author Wendell Mayo takes readers on a strange tour to the other side of the Iron Curtain, to a post-Soviet Lithuania that is simultaneously real and surreal, playfully comic and deeply tragic. Each story in this collection is quite different from the next, but they are tied together by the exploration of the new realities of Eastern Europe, and also by precise prose and characters who continue to haunt you long after you turn the page.

“The Cucumber King of Kėdainiai presents six wry, strange, funny, sad, and beautifully composed stories. In Mayo’s conjuring of contemporary Lithuania, characters reckon with Soviet ghosts, estrangement, economic class, beauty, pigeons, the eyebrows of General Secretary Brezhnev, and the fabulous weirdness of globalism. This is a significant, exceptional, ravishing book, and might be Mayo’s best yet.”
–Anthony Doerr

“We all come from beneath the overcoat, and Wendell Mayo—that expert tailor, that quilter deluxe—rips out the moth-eaten ‘seems’ of the short story, hemming up, in these blue tissue patterns, the sad sadness of the threadbare Baltic. These fictions warp and woof! You want to hold them close to your skin– in comfort, as dressing. Raw silk. Worsted wool.” –Michael Martone

The white limo raced through the darkness. After four more fumblings Valentine left that blasted pin alone, and I turned once more to look out my glass porthole. We began to penetrate a forest of hollyhocks, bled of most color by the pale third-moon. Blossoms studded monstrous stalks, pressed urgently against the glass. Petals exploded and flew and danced among shivering leaves, strange bits of violet and purple blossom flesh, some a rotten shade of orange, some white, then pink, a startling flurry of sulfur-yellow.

Valentine pointed her nose back in my direction. Her lips were pursed. I was sure she wanted to say something but I interposed my words, “I hope you know you’ve a rather radishy pimple on that nose of yours. Don’t you think you ought to take care of it before we meet this king?”

Suddenly she broke into opera. This time she was the Queen of Night, howling like a wolf at the maroon velour interior of the limo: We must be silent, silent, silent. We’re near the inner temple now! Then her voice cracked, up two octaves, and it was over. She’d cut loose the week before with Madama Butterfly in the post office in Šilutė, after which she took a four-foot rubber plant, pot and all, and began to waltz with it in broad sweeping circles. “Why?” I’d asked her. “Because,” she replied, “I’m not paying one hundred and seventy litai to ship that antique clock back to the States.”

Again she faced her porthole, and even with her back to me I could tell she’d set about harvesting that radish. Then we broke free of the hollyhock forest, petals in flurries about the limo, and before us lay a wizened birch wood, the thin paved roadway coiling upward. Bare birch branches stood against the lunar-lit sky, witchy, lonesome, emaciated limbs, stretching out, upward, frozen, the illusion of touching one another, yet, oddly, moon-shadows they cast never touched.

Then the castle grew into view, though not a castle by its shape, but a bald, galvanic dome, smooth and low on the horizon. As we continued to climb the serpentine road, seven walls rose beneath the eerie dome. I could not name the shape of what was looming there, could tell only that the monstrous walls, so rising, seemed to form the sides of an irregular polygon. As we grew closer the last of the bare and wizened birches gave way to haystacks, rotting at their bottoms, suddenly smelling anaerobic, bacterial. Along the berm of the road, great clods of dung appeared in hard, curved shapes, and the tires rumbled over them. The seven walls and dome rose and grew gargantuan in their aspect until I could see along the bottom of this baffling structure row after row of fetid haystacks and dung chips in pile upon pile, as if fertilizer for some organic and upward-spreading monument fed at its fecund and reeking feet by hay, dung, and all manner of decomposing vegetation: brownish wiry vines and potato tops, all shapes of fallen wet leaves which left eerie tannic outlines of their hand-like imprints in the foul gray concrete foundation of what I could scarcely believe was the King’s castle.

Discussion questions for The Cucumber King of Kėdainiai: Fictions

1. In three stories in the collection, for example, “Cold Fried Pike,” American protagonists find themselves embroiled in the post-Soviet experience of the Baltic region. What can you say about characters’ connections to this place and time in history?  What’s at stake for each? What do they seem to want? What complicates their pursuit of what they want?
2. In other stories, for instance, “Gōda,” Russian and Lithuanian protagonists encounter persons or influences from the West. How do they respond? How would you describe their desires, complications, predicaments?
3. Radical isolation seems a theme in fictions such as “Spider Story,” in which the narrator muses about the comfort and “domesticity” of a pair of spiders that make homes in his bathtub in an abandoned Soviet sanatorium. Identify and find elements of isolation in other stories. To what degree is this radial isolation a vehicle for change and/or revelation for characters in these stories?
4. In “Brezhnev’s Eyebrows” Grigoryev finds a pigeon perched upon his shoulder as he ascends the stairs to this eighth-floor flat in Vilnius. He muses, “It was like a game, to go slowly, to balance himself, to make it all the way inside his flat with the bird intact on his shoulder. Strange, but his little balancing game suddenly seemed so important, as if history itself were perched upon his shoulder, feathered and tottering, fat, wobbly, its claws clenching, unclenching, piercing the fabric of his shirt as he shifted weight, one leg to another, and tried to move forward.”  How are characters in these stories burdened by their personal histories? How might these personal histories reflect larger historical narratives of Eastern Europe and America?
5. The concluding fiction, “The Universal Store,” is an unusual narrative—a fiction made of three seemingly unrelated narratives—two set in contemporary Lithuania and one in its deep mythological past. One notion that interconnects these narratives (among others) is desire. Identify and trace the nature of desire in each different narrative. How does the notion of desire repeat and vary in each?

Wendell Mayo is author of Centaur of the North, winner of the Aztlán Prize; B. Horror and Other Stories; and a novel-in-stories, In Lithuanian Wood. Over one hundred of his short stories have appeared widely in magazines and anthologies, including Yale Review, Harvard Review, Manoa, Missouri Review, New Letters, Prism International, and others.