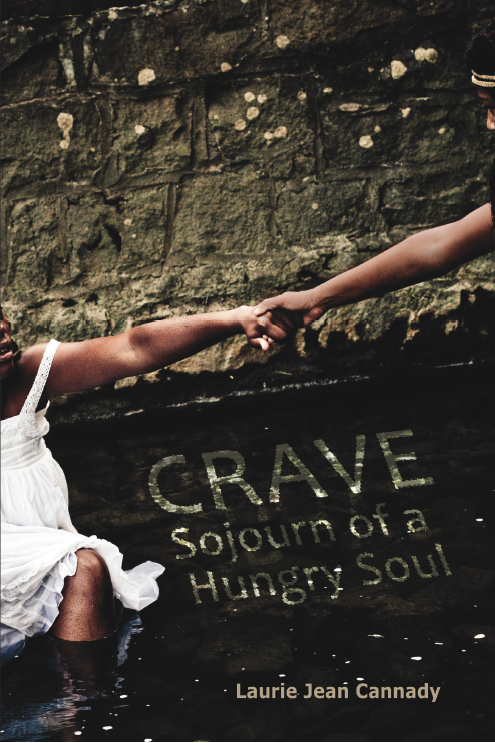 Crave is a coming-of-age memoir that chronicles a young girl’s journey through abuse and impoverishment.

The effusive narration descends into the depths of personal and sexual degradation,
perpetual hunger for food, safety and survival. While moving through gritty exposés of poverty, abuse, and starvation, Crave renders a continuing search for sustenance that simply will not die.

Laurie Jean Cannady is most recognizable through her voice. Lyrical and august, yet strangely intimate, her lucid memory for the texture of daily existence weaves the reader into the fabric of the story. We discover that the most slender threads bind the strongest.
It is no surprise this memoir is a narrative about a victim who becomes a survivor.

Cannady is assertive, motivational, and unafraid to reach her target audience: women, African-Americans, high-school students, college students, survivors of physical and sexual abuse, veterans, people raised by single parents, and folks who are living in or have lived through impoverishment.

What People Are Saying about Crave: Sojourn of a Hungry Soul

What an extraordinary memoir! Crave: Sojourn of a
Hungry Soul is Laurie Jean Cannady’s intense yet
inspiring story of overcoming the terrors and traumas
that befall a young black woman on her hard-won path to
selfhood and self-love … The light at the end of this fierce
and uncompromising book is nourishment to the spirit.
– Rigoberto González, Unpeopled Eden

Crave: Sojourn of a Hungry Soul is a soul-searing
memoir that marks the arrival of an unforgettable
new voice. Brave, honest, and beautiful, this is
a story about facing the truth, and daring to love
your way through to the other side.
– Tayari Jones, Silver Sparrow

A young black woman’s searing debut memoir about growing up poor and facing the challenges of both physical and emotional hunger.

Cannady knew what it was like to be hungry even before she was born: “Food was a scarcity in my Momma’s womb, my first home.” Her mother, Lois, was still a teenager when the author was born and had already experienced rape at the hands of her first baby’s father. Cannady’s father, Carl, was the second man in Lois’ life, and until Lois gave birth, he seemed to offer hope for a brighter future. But the longer the author’s mother stayed with him, the more abusive and parasitic he became, hitting Lois and feeding off the little money she received from welfare. The first significant male figure to enter Cannady’s life after Carl was Pee Wee, who helped make the family’s hunger disappear. But his contributions to the household came at a cost. Until Pee Wee was arrested for pedophilia, he sexually abused Cannady and threatened to kill Lois if Cannady ever told her the truth. Other men entered and left the family’s life and brought temporary security and nourishment with them. Yet inevitably, they all became unreliable and/or violent. This instability, combined with Cannady’s early experience with sexual victimization, led her into the arms of boys and men who were just as damaged as she was. However, the great tragedy was that these boyfriends genuinely wanted to care for Cannady before they succumbed to their own brutal conditioning. Throughout this at-times painful narrative, the author also celebrates the strength of her bonds among the members of her family and especially with her mother. These bonds offered her the sustenance she needed to become a woman whose hunger to escape the cycle of abuse eventually trumped dysfunction and chaos and put her on a road to a better life.

A bold, honest, and courageous memoir.

The Star Side of Bird Hill by Naomi Jackson

This lyrical novel of community, betrayal, and love centers on an unforgettable matriarchal family in Barbados. Two sisters, ages ten and sixteen, are exiled from Brooklyn to Bird Hill in Barbados after their mother can no longer care for them. The young Phaedra and her older sister, Dionne, live for the summer of 1989 with their grandmother Hyacinth, a midwife and practitioner of the local spiritual practice of obeah.

Dionne spends the summer in search of love, testing her grandmother’s limits, and wanting to go home. Phaedra explores Bird Hill, where her family has lived for generations, accompanies her grandmother in her role as a midwife, and investigates their mother’s mysterious life.

This tautly paced coming-of-age story builds to a crisis when the father they barely know comes to Bird Hill to reclaim his daughters, and both Phaedra and Dionne must choose between the Brooklyn they once knew and loved or the Barbados of their family.

Jackson’s Barbados and her characters are singular, especially the wise Hyacinth and the heartbreaking young Phaedra, who is coming into her own as a young woman amid the tumult of her family. (Amazon Book Description) READ MORE

How to Be Drawn by Terrance Hayes

In How to Be Drawn, his daring fifth collection, Terrance Hayes explores how we see and are seen. While many of these poems bear the clearest imprint yet of Hayes’s background as a visual artist, they do not strive to describe art so much as inhabit it. Thus, one poem contemplates the principle of blind contour drawing while others are inspired by maps, graphs, and assorted artists. The formal and emotional versatilities that distinguish Hayes’s award-winning poetry are unified by existential focus. Simultaneously complex and transparent, urgent and composed, How to Be Drawn is a mesmerizing achievement. (Amazon Book Description) READ MORE

Discussion Questions for Crave: Sojourn of a Hungry Soul

1. The author’s narration begins before she is born. The narrative then moves thematically versus chronologically. Did you find this an effective strategy? Does it unify the narrative throughout the work

2. The author uses the theme of hunger in order to convey her narrative. Which form of hunger looms larger throughout the narrative? Are there any forms of hunger which seem more difficult or impossibly to satisfy?

3. Generational curses/dysfunctions are prevalent themes throughout Crave. Why does it seem so difficult for the women in the narrator’s family to break these curses? Why does it seem that they sometimes surrender themselves and their children to the curses?

In her time at Lock Haven University of Pennsylvania, Dr. Laurie Jean Cannady has served as an unflinching example of ingenuity, dedication, and bravery. Raised in Portsmouth, Virginia, she has continuously worked to give voice to those who don’t often have the platform to speak their ills. She writes, teaches, and lives with a ferocity that inspires others to do the same. From the projects of Virginia to the classrooms of Pennsylvania, she has established herself as an effective leader, an engaging writer, and an inspiring professor.

Soon after graduating high school, Dr. Cannady enlisted in the United States Army. She traveled the world and received several promotions and awards for her service. Despite the acclamation that comes with serving one’s country, Dr. Cannady’s path has not always been easy. At nineteen, she gave birth to her eldest son, quickly becoming a single and battered mother. She struggled to maintain a balance between her responsibilities to the military and her responsibilities to her child. After six years, she completed her service in the Army and received an honorable discharge, settling in Clarksville, TN.

Despite the difficulties associated with being a single parent and providing for her family, Dr. Cannady began a new journey in her life: she enrolled at Austin Peay State University and set in motion her pursuit for higher education. Working part-time jobs and financially surviving on her G.I. Bill, Dr. Cannady received her Bachelor of Arts degree in two years of study, graduating Magna Cum Laude. She earned her Master of Arts degree in one year of study, graduating with a 3.83 G.P.A., and she later completed her Doctorate of Philosophy at Indiana University of Pennsylvania in three years of study with a 4.0 G.P.A. Additionally, she earned an MFA in Creative Writing at Vermont College of Fine Arts in 2010.

Dr. Cannady has ardently served Lock Haven University and its surrounding communities. She established Lyrically Speaking, a spoken word group, which encourages students to discuss, craft, and perform original poetry that captures the essence of their realities. She has served as faculty advisor to several groups on campus, including the Distinguished Gentlemen, a male minority group focused on encouraging leadership and Diamonds in the Ruff, a multicultural dance group.

Having served as chair of the APSCUF Minority Retention Committee, Dr. Cannady also showed her dedication to students. She and colleagues, Ramona Broomer and Kenneth Hall, established the Miriam B. Harris Celebration of Excellence Awards Dinner, where students of color are honored for accolades received at Lock Haven University. She served on the advisory board for Lock Haven University’s women’s center, Haven Outreach Program for Advocacy (H.O.P.E), and she served on the President’s Commission on the Status of Women. She currently serves as the chair of Lock Haven University’s President’s Commission on the Status of Faculty, Administration, Students, and Staff of Color (FASSt). She also co-chairs the Jersey Shore Area School District’s Diversity Committee. In 2011, Dr. Cannady won the Woman of Distinction Award at Lock Haven University.

Dr. Cannady is currently a professor of English at Lock Haven University of Pennsylvania, with a specialty in African American women’s literature and creative nonfiction. Dr. Cannady has published an array of articles and essays on poverty in America, community and domestic violence, and women’s issues. She has also spoken against sexual assault in the military at The United States Military Academy at West Point. Her memoir, Crave: Sojourn of a Hungry Soul, will be published November 2015 with Etruscan Press. Kirkus Reviews describes Crave as “a bold, honest, and courageous memoir.”

At Lock Haven University, Dr. Cannady spends much of her time encouraging students to realize their potential, while demonstrating excellence inside and outside of the classroom. Her dedication to students and learning sets her apart from others, as she works to instill that same dedication and love of learning in each of the students she meets.

Dr. Cannady currently resides in Central Pennsylvania with her husband, Chico Cannady and their three children.

Crave is a coming-of-age memoir that chronicles a young girl’s journey through abuse and impoverishment.

The effusive narration descends into the depths of personal and sexual degradation,
perpetual hunger for food, safety and survival. While moving through gritty exposés of poverty, abuse, and starvation, Crave renders a continuing search for sustenance that simply will not die.

Laurie Jean Cannady is most recognizable through her voice. Lyrical and august, yet strangely intimate, her lucid memory for the texture of daily existence weaves the reader into the fabric of the story. We discover that the most slender threads bind the strongest.
It is no surprise this memoir is a narrative about a victim who becomes a survivor.

Cannady is assertive, motivational, and unafraid to reach her target audience: women, African-Americans, high-school students, college students, survivors of physical and sexual abuse, veterans, people raised by single parents, and folks who are living in or have lived through impoverishment.