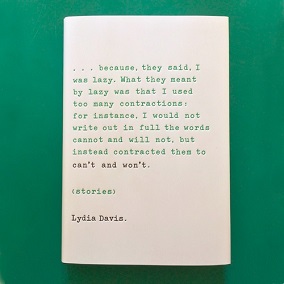 Can’t and Won’t by Lydia Davis

Her stories may be literal one-liners: the entirety of “Bloomington” reads, “Now that I have been here for a little while, I can say with confidence that I have never been here before.” Or they may be lengthier investigations of the havoc wreaked by the most mundane disruptions to routine: in “A Small Story About a Small Box of Chocolates,” a professor receives a gift of thirty-two small chocolates and is paralyzed by the multitude of options she imagines for their consumption. The stories may appear in the form of letters of complaint; they may be extracted from Flaubert’s correspondence; or they may be inspired by the author’s own dreams, or the dreams of friends.

What does not vary throughout Can’t and Won’t, Lydia Davis’s fifth collection of stories, is the power of her finely honed prose. Davis is sharply observant; she is wry or witty or poignant. Above all, she is refreshing. Davis writes with bracing candor and sly humor about the quotidian, revealing the mysterious, the foreign, the alienating, and the pleasurable within the predictable patterns of daily life.

“Lydia Davis’s short-story collections tend to exceed the boundaries of a single book and become libraries . . . Whatever its source, Davis’s range is all the more impressive for reading as a series of natural progressions . . . Come to this one-book library for the mercurial gifts of its author; stay because the stories continually renew their invitation to be read inventively.”  —Helen Oyeyemi, The Guardian

“Unlike most American writers receiving international prizes, [Lydia Davis] . . . tend[s] to focus on very short stories, but they might be better described as succinct, exploding the accredited clichés of literary fiction, until so much of that intricate plotting, deft characterization, etc., seems to be futile marketing copy . . . Her new collection Can’t and Won’t makes use of extreme brevity . . . often to bracket deadpan jokes, tight little bows that unravel in your hands . . . neat simplicity is less façade than grist. Like Raymond Queneau’s Exercises in Style, the twin variations of ‘Reversible Story’ become more striking for their absence of incident . . . And ‘Men’ demonstrates that, despite Davis’s wry restraint, her prose can still trot into flight.”           —Chris Randall, The National Post

“Davis is something of a genius at twisting . . . ideas around her little finger, like a precocious child twirling her hair into odd shapes. There is wit, humour and a strange beauty in her compressed concentration of the short story . . . Even at her most poetic . . . Davis is a storyteller, albeit one whose plots unfold with the quiet, philosophical precision of a Borges story.” —James Kidd, South China Morning Post LYDIA DAVIS is the author of one novel and four previous story collections, the most recent of which, Varieties of Disturbance, was a finalist for the 2007 National Book Award. She is also the acclaimed translator of Swann’s Way (2003) and Madame Bovary (2010), both of which were awarded the French American Foundation Translation Prize. The Collected Stories of Lydia Davis, published in 2009, was described by James Wood in The New Yorker as a “grand cumulative achievement.” She is the winner of the 2013 Man Booker International Prize. Can’t and Won’t will be published in April 2014.