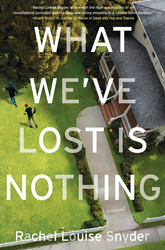 From an NPR contributor, investigative journalist, and one of Library Journal’s “outstanding new voices,” a striking debut novel that chronicles the first twenty-four hours after a mass burglary in a suburban Chicago neighborhood and the suspicions, secrets, and prejudices that surface in its wake.

In her striking debut novel, Rachel Louise Snyder chronicles the twenty-four hours following a mass burglary in a Chicago suburb and the suspicions, secrets, and prejudices that surface in its wake.

Nestled on the edge of Chicago’s gritty west side, Oak Park is a suburb in flux. To the west, theaters and shops frame posh houses designed by Frank Lloyd Wright. To the east lies a neighborhood still recovering from urban decline. In the center of the community sits Ilios Lane, a pristine cul-de-sac dotted with quiet homes that bridge the surrounding extremes of wealth and poverty.

On the first warm day in April, Mary Elizabeth McPherson, a lifelong resident of Ilios Lane, skips school with her friend Sofia. As the two experiment with a heavy dose of ecstasy in Mary Elizabeth’s dining room, a series of home invasions rocks their neighborhood. At first the community is determined to band together, but rising suspicions soon threaten to destroy the world they were attempting to create. Filtered through a vibrant pinwheel of characters, Snyder’s tour de force evokes the heightened tension of a community on edge as it builds toward one of the most explosive conclusions in recent fiction. Incisive and panoramic, What We’ve Lost is Nothing illuminates the evolving relationship between American cities and their suburbs, the hidden prejudices that can threaten a way of life, and the redemptive power of tolerance in a community torn asunder.

What People Are Saying about What We’ve Lost Is Nothing

“Veteran journalist Snyder crafts a muscular and fearless debut novel that boldly tackles the heady themes of prejudice, self-preservation, poverty and privilege. Deftly underscored by a steady drumbeat of denial and discontent, Snyder’s drama provocatively reveals the escalating tensions of a community about to implode.” — Booklist

“Snyder’s debut is smooth and engaging, and reads like the work of a veteran novelist.” — Publishers Weekly

“Rachel Louise Snyder writes with the rigorous scrutiny of an investigative journalist and the deep and roving empathy of a natural-born novelist; the result is a bold and mesmerizing exploration of daily truths we don’t talk about nearly enough: class prejudice and racism; the chasm between newly arrived immigrants and those of us who’ve been here for generations; the painful division between husbands and wives and the children they’ve made; and that razored air between what we believe and what is. What We’ve Lost is Nothing is a stellar debut by an important and necessary new voice among us.” — Andre Dubus III, author of House of Sand and Fog and Townie

Discussion Questions for What We’ve Lost Is Nothing

1. 1. The novel opens with Caz and Mary walking to Mary’s home, but only picks up the second half of their story at almost the very end of the book. How does this technique influence your reading of the rest of the novel, and your perception of the characters, especially Caz? How does this flash-forward serve to make the rest of Mary’s story all the more surprising?

2. 2. Between the novel’s epigram, the blog post comment on page 203, and the name Ilios Lane itself, the Homeric references are clearly no accident. What effect do these references have on your understanding of the story, either on the level of plot or theme?

3. 3. Contrary to most of the adults in the novel, Mary seems to think of the burglaries primarily as an opportunity, specifically to boost her “standing in the high school caste system”(p. 2). Are there other examples of opportunity arising out of loss? Do you see this phenomenon in the real world as well?

Rachel Louise Snyder is a writer, radio commentator, and professor of creative writing at American University. The author of Fugitive Denim: A Moving Story of People and Pants in the Borderless World of Global Trade, she has contributed regularly to NPR’s All Things Considered and she hosted the public radio series, Global Guru and Latitudes. Her writing has appeared in The New Yorker, The New York Times Magazine, Slate, Salon, The Washington Post, the Chicago Tribune, and the New Republic. Originally from Chicago, she has lived in Boston, London, and Phnom Penh, and currently lives in Washington, DC, with her husband and daughter.