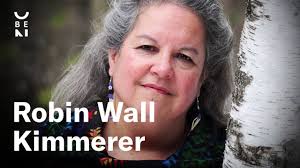 Never had I thanked a tomato plant when picking its fruit, but after reading Robin Wall Kimmerer’s Braiding Sweetgrass, I say thank you and think about what I can give in return to the plant. As an educator dedicated to children experiencing nature, this indigenous/scientist’s passion for the natural world is inspiring to me. It’s so radically anti-capitalist, this simple thank you and respect for Mother Earth.
(Milkweed Editions)

Jennifer Moglia Lucil is a writer, outdoor teacher, and intrepid parent of twin teenage boys. Her southwest home has taught her about reciprocity with the natural world, while her New York and Massachusetts families have taught her to recover her roots in order to take imaginative flights.

Jennifer’s work has won local recognition, from the Albuquerque Museum of Art, Anne Hillerman Celebration of Writing Award, 2019, for “Night of Thieves,” and from Alibi.com’s Pretty in Pink Writing Contest for “Chance Conversations: Teachers Seize the Ride-Sharing Moment.”

Jennifer studied Literature at Smith College and holds a Master’s degree in Literature and Film Studies from Brown University. She lives and works in Albuquerque, New Mexico.

Jennifer Moglia Lucil grew up in New York, where her parents brought her to Broadway plays at every opportunity. Sometime later, though, she had a dream about picking up roots and traveling West. She now resides in Albuquerque, New Mexico, with her twin sons. Jennifer teaches an outdoor kindergarten and is a fierce advocate for children being in nature.

Jennifer's work has won local recognition, from the Albuquerque Museum of Art, Anne Hillerman Celebration of Writing Award, 2019, for "Night of Thieves," and from Alibi.com's Pretty in Pink Writing Contest for "Chance Conversations: Teachers Seize the Ride-Sharing Moment."

Jennifer studied Literature at Smith College and holds a Master's degree in Literature and Film Studies from Brown University. She lives and works in Albuquerque, New Mexico.