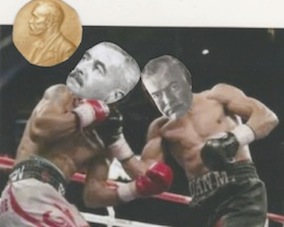 “It’s very hard to be a gentleman and a writer.”

While writers have long battled publishers, editors, and critics, many have fought even more fiercely with the competition – themselves. If editorial rejection is maddening, peer criticism can be even more infuriating.

This is particularly true in the U.S. where competition is king – in the arts, no less than sports. The works of fully mature artists are incomparable. Apples and oranges. But some have struggled to be recognized, through sales or prizes, as The Greatest. The #1.

“I started out very quiet and I beat Mr. Turgenev,” wrote Hemingway. “Then I trained hard and I beat Mr. de Maupassant. I’ve fought two draws with Mr. Stendhal, and I think I had an edge on the last one.”

Dispensing with metaphor, Hemingway and his colleagues came to real blows about who was the titleholder. The one-upsmanship often deteriorated into character assassination. In a letter to Harvey Breit, Hemingway called Faulkner “a strange sort of phony cunt.” In a note to Malcolm Cowley, he described his rival as lacking “conscience” and “moral fiber.” But lest Cowley think he begrudged Faulkner his earlier Nobel, Papa conceded that his foe had a natural, if undisciplined, talent.

The great southern novelist could be no less patronizing and competitive. “The good artist … has supreme vanity,” he told the Paris Review. “No matter how much he admires the old writer, he wants to beat him.” Even before The Sound and the Fury, Faulkner had announced: “I am the best in America, by God!”

If not more modest, Hemingway was more metaphorical about his own abilities. “I don’t like to write like God,” he pointed out. “It is only because you never do it, though, that the critics think you can’t do it.”

Just as America’s third Nobel laureate considered the second a phony, he dismissed the first laureate, Sinclair Lewis, as a “fake.” Lewis, who anointed himself “the best writer in this here goddamn country,” counterpunched by calling Hemingway “a dull-witted, bovine, monosyllabic simpleton.”

Not a stranger to literary roughhousing, Lewis had gone toe-to-toe with another top contender, Theodore Dreiser, after returning from Stockholm as the first rock star of American letters in 1930. At a Nobel celebration dinner attended by the New York literati, Lewis called his rival a “plagiarist” and an “ignoramus.” The creator of Sister Carrie challenged the guest of honor, “Say it again, and I’ll slap you.” So Arrowsmith did so and got himself slapped. The next day, the newspapers whipped up a popular frenzy for a proper rematch between the reigning American realists. A New York fight promoter proposed a “Dreiser Heavyweight Champ of American letters” versus “Kid Lewis” 15-round bout at Ebbets Field. When the two declined to participate, the promoter suggested they hire ghostwriter fighters.

In his diary, Dreiser described himself as “blazing with… a desire for superiority” and confessed to an “egotism written in every lineament.” Much like his other American heavyweight rivals – Lewis, Faulkner, and Hemingway.

The fourth American Nobel laureate, John Steinbeck, suffered the same affliction. “The whole early part of my life was poisoned with egotism,” he confessed. But he believed good writing came from “an absence of ego.”[2] And, as a point of honor, he refused to belittle his colleagues. Until he met Hemingway.

With great expectations, John O’Hara and John Hersey had arranged a summit between the two titans at a Manhattan restaurant. The year: 1944. Steinbeck was finishing Cannery Row then and riding high from The Grapes of Wrath. But, to his annoyance, many still dismissed him as “the poor man’s Hemingway.” As for Papa, his For Whom the Bell Tolls had come out in 1940, but he was entering an eleven-year drought.

After shoptalk and a few rounds, Hemingway bet $50 that he could break O’Hara’s prize blackthorn walking stick—a gift from Steinbeck—over his, O’Hara’s, head. Papa promptly did so, triumphantly threw the pieces down and demanded his money. Head in hands, the hypersensitive O’Hara was on the edge of tears.[3]

The walking stick incident moved Steinbeck to change his professional détente policy: He launched into diatribes about Hemingway.

When collecting his own Nobel eight years after Hemingway, a reporter asked Steinbeck if he felt he “deserved” the honor. “Frankly, no,” he replied in deference to those who had been overlooked by the Royal Academy, such as John O’Hara who confessed to craving the prize “so bad I can taste it.” When the Swedish inventor of dynamite honored Steinbeck, O’Hara sent him a telegram: “Congratulations, I can think of only one other author I’d rather see get it.”

A decade after the Hemingway moveable feast on O’Hara, Steinbeck invited Faulkner to dinner. By then the host was in his prime and his guest twenty years past it. Three sheets to the wind on arrival, Faulkner managed a few monosyllables during the course of the evening. Otherwise, he grunted, glared, and drained the bar. “We had a dreadful time with him,” recalled Elaine Steinbeck. Months later the Sound and the Fury ran into the Grapes of Wrath at a literary affair.

“I must have been pretty awful that night,” he said.

Steinbeck, not always an easy person himself, winked: “You were.”[4]

Mark Twain — whom Faulkner called the “father of American literature” but later dismissed as a “hack” — could be awful himself, suffering from the same supreme vanity and determination to “outrival those whom the public most admires.”[5] In his critical reviews, the former Mississippi River boat pilot enlarged himself by belittling his competitors: he sliced and diced George Eliot, Jane Austen, Robert Louis Stevenson, and James Fenimore Cooper with what he called “a pen warmed up in hell.”

Twain, embroiled in more lawsuits than any other American author, reserved his greatest spleen for his first editor and mentor, Bret Harte. “He trimmed and trained and schooled me patiently,” he admitted. Within a few years, Harte was written out, doing jingles for a soap company, and begging his now famous student for a handout. Twain offered him $25 for a play collaboration. Soon he branded the author of “The Outcasts of Poker Flat,” “a liar, a thief, a swindler, a snob, a sot, a sponge, a coward,” adding that he was gay, Jewish, a plagiarist and never “had an idea that he came by honestly.” After his teacher surrendered to throat cancer, he provided the eulogy: “Not a man … but an invertebrate without a country.”[6]

Shortly before his own death eight years later, Twain, once esteemed as a humanitarian and champion of the underdog, confessed: “I am full of malice, saturated with malignity.”