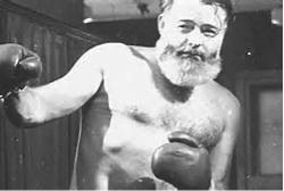 “My writing is nothing, my boxing is everything.”

“The minute he began to have some sort of obligation

to you of love or friendship… then is when he had to kill you.” Donald Ogden Stewart, Hemingway friend

In The Torrents of Spring, Hemingway dismissed his contemporaries collectively as “pretentious fakes.” As a result, he was unfriended by many, notably two: his mentor and primary target, Sherwood Anderson, and his other enabler, Gertrude Stein, who purged him from her Lost Generation Montparnasse salon after claiming she had “created” him.

Papa’s Paris editor, Ernest Walsh, called Torrents “The Cheapest Book I Ever Read.” In another essay, Walsh failed to include him in his list of “the six greatest living literary artists.”[1]

When, months later, he died of TB at age 31, Hemingway wrote his remaining friend, Ezra Pound: “I have known too many good guys die to be able to sweat much from the eyes about the death of a shit.”[2]

While they were still on speaking terms, Hemingway had assured Walsh that his other title that year, The Sun Also Rises (1926) would contain “no autobiography and no complaints.” But it contained all the characters and events of bull fighting season in Pamplona the year before. The Jewish anti-hero, Robert Cohn, was his former traveling companion and boxing sparring partner, Robert Loeb, Peggy Guggenheim’s cousin. After the publication of the novel, he avoided his former “friend,” for fear that he might be shot.

Six years later, critics savaged Death in the Afternoon. Max Eastman parodied the bullfighting homage with “Bull in the Afternoon,” claiming that Hemingway not only wore false chest hair, but — like his Sun Also Rises hero, Jake — couldn’t get it up. Papa seethed over the insult for several years. At last, he cornered Eastman in the Scribner offices, charging that the socialist had tried to kiss his wife in a Paris taxi. Dispensing with accusations and epithets, the writers then got it on. Eastman reported that the scuffle climaxed when he threw Hemingway  over Max Perkins’ desk. Papa, however, insisted that Eastman had attacked him like “a clawing woman.” Showing his talent for fiction, Papa said he gentlemanly refrained from “socking” his assailant, lest he send him through the window and onto Fifth Avenue below.

Earlier, while other picadors were going to work on his bullfighting passion play, Hemingway had written his editor, Max Perkins: “You see what they [critics] can’t get over is 1. That I am a man. 2. That I can beat the shit out of any of them. 3. That I can write. The last hurts them the worst. But they don‘t like any of it. But Papa will make them like it.”

But he failed to make them like his follow-up, The Green Hills of Africa. Now he wanted to do more than beat the shit out of Eastman and his other detractors. “I would like to take the tommy gun and open up at 21 [Club] or in the N.R. [New Republic] offices or any place you name and give shitdom a few martyrs and include myself,” he wrote his friend, John Dos Passos, whom he called a money-grubbing “pilot fish.”

Instead of going Columbine on critics, he wrote For Whom the Bell Tolls, his only title from the ‘40s. The novel concerns a Spanish Civil War dynamiter who, maimed in the end, refuses to be shot by his comrades so he can kill more fascists before they kill him. In real life, one of them turned out to be his former ally, Edmund Wilson, who fragged him in “Hemingway: Gauge of Morale,” an essay he, Papa, unsuccessfully tried to quash with a legal injunction.

By 1951, fearing that James Jones’s From Here to Eternity was overshadowing his own war novels, Ernest wrote to their publisher, Charles Scribner Jr.: “I hope he kills himself as soon as it does not damage his or your sales. If you give him a literary tea, you might ask him to drain a bucket of snot and then suck the puss out of a dead nigger’s ear.”

In his otherwise laudatory and diplomatic memoir, Scribner wrote, “Working with Hemingway was rather like being strapped to an electric chair,” adding that he was “a two-timer and not above despicable tricks.”[3]

Ezra Pound had helped him get his start in Paris. In exchange, Ernest had taught Ezra — already a jujitsu master who had once thrown Robert Frost over his back — how to box. Of the many other artists the poet had helped, Papa wrote without irony, “In the end a few of them refrain from knifing him in the back.”

Had the Life and Argosy celebrity sportsman been deprived of Spanish bulls and African trophies, one imagines that he might have adorned his Ketchum hunting lodge walls with the heads of Sherwood Anderson, Gertrude Stein, Ford Maddox Ford, and the others imprudent enough to help him.

“Ernest would always give a helping hand to a man on a ledge a little higher up,” wrote F. Scott Fitzgerald, explaining his friend’s idea of camaraderie.

Fitzgerald had indeed been higher up in ’25 after Gatsby but was overtaken by Hemingway’s The Sun Also Rises the following year, then left in the dust by A Farewell to Arms in ’29. In the year of the Crash, according to his biographer, he made only $32 in book royalties.[4]

This is how things stood when the American heavyweight faced off with the Canadian, Morley Callaghan, Fitzgerald filling in as ref. A former Toronto Star colleague of his opponent, Callaghan had only one novel to his credit before their bout at the American Soldiers Club of Paris where they sparred regularly.

Though four inches shorter and forty pounds lighter, Callaghan knocked Hemingway down late in the 2nd Round. Regaining his feet, Papa struggled to stay up till the 3-minute bell from Fitzgerald. But the 3 minutes seemed to him the longest he had ever endured in the ring, Callaghan delivering a barrage of haymakers, returning him to the mat several times. When at last, Fitzgerald counted him out, through swollen eyes Hemingway saw the clock closing in on 4 minutes. Scott apologized profusely.

“If you want to see me getting the shit knocked out of me, just say so,” snapped Ernest. “Only, don’t say you made a mistake!”

The relationship of the two masters was never quite the same. Hemingway began publicly denouncing his former friend for cowardice and self-pity.

“Please lay off me in print,” Scott wrote him. “If I choose to write de profundis sometimes it doesn’t mean I want friends praying aloud over my corpse.”

But the two American icons continued to correspond now and then. In another de profundis moment, Scott confided to Ernest that his wife, Zelda, had mocked the size of his penis. The bare-bones masculine stylist — whom Zelda had called impotent and a closeted homosexual — was kind enough to console his fretful colleague with an adverb and adjective. “It’s perfectly fine: Your wife just wants to destroy you.”

Then to make the creator of Gatsby feel better, he wrote a poem for him: ”Lines to be Read at the Casting of Scott Fitzgerald’s Balls into the Sea from Eden Rock.”