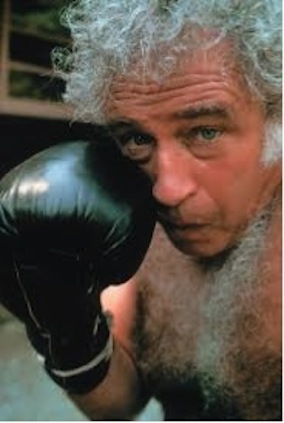 “It was almost as if each [Mailer] book was a round in a fight.”

the bell, the deadline….the showoff shuffle, the mingled blood on your glove, the spitting your teeth up at the end of the day.”

It was the year after the release of Norman Mailer’s Advertisements for Myself. Venue: a launch party for his New York City mayoral campaign. On the invitation list were the literati who had not excommunicated him, homeless people, and “the power people,” as he called them. His Tonto, George Plimpton, was responsible for mustering the third group. Disappointed more didn’t show for his soiree, Norman swatted the Paris Review editor with a rolled newspaper at the weigh-in.

By 4 a.m. only about twenty diehard partiers were left. Their host had ordered them to form two lines: those for him, and those against him. His second wife, Adele, led the second, larger group. According to her memoir (The Last Party: Scenes from My Life with Norman Mailer), the bell rang when she challenged her lubricated lesser half, dressed in a torn matador’s shirt, “Aja Toro, aja! Come on you little faggot, where’s your cohones, did your ugly whore of a mistress cut them off, you son of a bitch!”

Besides Jose Torres, Mailer’s other boxing trainer was Adele’s father. Perhaps not wishing to disappoint his in-law, he didn’t KO Adele. Instead, he shanked her in the chest with a pocketknife.

Later, in Tough Guys Don’t Dance, he wrote: “I was thinking that surgeons had to be the happiest people on earth. To cut people up and get paid for it – that’s happiness.”

But, after doing Adele, he was more desperate than happy. At the hospital, he begged her, on bended knee, not to press charges (though he had told his party guests not to call an ambulance, and to “let the bitch die”). Showing herself to be a sport, she didn’t. She told her doctors she fell on glass. This allowed her husband to do The Mike Wallace Show days later to flesh out his mayoral platform. To combat increasing city crime and juvenile delinquency, he suggested that potential felons blow off steam by jousting on horseback in Central Park.

Mailer went on to pass his court-ordered psych evaluation at Bellevue, perhaps handing out to his examiners signed copies of The Naked and the Dead or his “No More Bullshit” campaign buttons.

On account of “the Trouble,” as he called the stabbing of his wife, the novelist found himself unable to write anything but poetry. In ’62, he released his four hundred piece collection, Deaths for the Ladies. At a pre-pub reading, he told the crowd: “So long as you use a knife, there’s some love left.”[1]

By this time, Mailer’s top contenders for the American self-promoter crown were Gore Vidal and Truman Capote. “Out of all those people who began publishing when I did,” said the latter, “there are only three left that anybody knows about — Gore, Norman and me.”[2]

Nobody in the country rivaled the trinity in narcissism, competitiveness, or irascibility. Gore Vidal spoke for them all when he said: “Whenever a friend succeeds, a little something in me dies.”

Early on, Capote and Mailer were Brooklyn neighbors and friends. In a 1967 New York Post interview, Truman praised Norman as “a fantastic talent,” though undisciplined.[3] In turn, Norman praised Truman for “having a lovely poetic ear,” and for crafting “the best sentences” of their generation.[4]

The pushing and shoving started in 1968 when Mailer won the Pulitzer and National Book Award for his “non-fiction novel” about Vietnam, Armies in the Night. As editor Betsy Lerner later observed, there is nothing like such awards “to stir up grudges.” Two years before, with the publication of In Cold Blood, Capote had declared himself father of this new art form and had thrown himself “the party of the century” at the Plaza. But the Pulitzer committee had ignored him. He doubled his medications in 1979 when Mailer landed a second Pulitzer for The Executioner’s Song.

Capote accused him of pirating his new fiction genre. “Now I see that the only prizes Norman wins are for that very same kind of writing,” he sniped. “I’m glad I was of some small service to him.”

Holding his Pulitzer belts high in the ring, the TKO winner didn’t bother finishing the 5’2” featherweight off. He just laughed in his face and used him as a futon at a cocktail party.

“He has no talent! None none none!” protested the father of The New Journalism.

Capote might have mounted a stiffer defense if the third rail of the post-war American trinity, Gore Vidal, hadn’t been softening him on the ropes too.

The two had been bickering for years. Truman called Vidal a poor man’s Somerset Maugham, devoid of sensitivity, and suited only for glib, self-aggrandizing essays. Worse, in 1976, Truman told Playgirl magazine that Bobby Kennedy had once “kicked Gore out onto Pennsylvania Avenue” for manhandling his stepsister, Jackie, at a White House party.

“Truman Capote has made lying an art. A minor art,” Vidal rejoined, filing a $1 million libel suit. As for his rival’s writing, he told Playboy magazine it was “ruthlessly unoriginal” and lifted from Carson McCullers and Eudora Welty.

“I’m always sad about Gore — very sad that he has to breathe every day,” parried Truman.

He countersued, hoping to “destroy his career,” to exact “the greatest single revenge in literary history,” and to write his epitaph: “Here lies Gore Vidal: he messed with TC!”

Truman had vivisected Tennessee Williams in Unspoiled Monsters, too, going on to satirize others in Answered Prayers. When targeted former friends stopped talking to the incorrigible gossip, he complained to his editor, “What did they expect? I’m a writer, I use everything!”

Though furious with Mailer for stealing his In Cold Blood thunder, Capote was giddy when Norman flew over the ropes and headbutted Gore before their joint appearance on the Dick Cavett Show in ’71.

“You’re absolutely mad,” gasped the victim. “You are violent.”

But Norman wasn’t finished. He stumbled out, took a seat beside Cavett, and gave Gore one to the gut. What was inside, he announced to America, was “no more interesting than the contents of the stomach of an intellectual cow.”[5]

Mailer and Vidal had also been friendly early on. The relationship soured at the ’68 Democratic convention. Norman was there to research a book. Gore was there to make William Buckley his bitch, before Bill made Gore his. The ABC face-off climaxed with Vidal calling Buckley a “pro-crypto Nazi,” and Buckley calling him “a commie pinko fag,” then threatening to “sock [him] in the goddamn face.”

Afterwards, Vidal saw the conservative champion chumming it up at a Chicago Happy Hour with the self-described “Marxian anarchist” – Norman Mailer. Vidal, like Capote, was miffed that Mailer had just won the Pulitzer, whereas his own ’68 bestseller, Myra Breckenridge, had been ignored. Worse, Buckley called Vidal “an evangelist for bisexuality, and labeled the controversial novel “pornography.” More upsetting still, Mailer had accused Vidal of seducing Jack Kerouac and driving him to suicidal drinking.

To see his detractors schmoozing at the bar drove Vidal to the offensive. He soon shot one over his former friend’s bow. “No one reads Norman, they hear of him,” he sneered.[6]

So Mailer responded with the ’71 headbutt. Six years later at a Lally Weymouth mixer, according to Boris Kachka, he threw a cocktail in his Moriarty’s face, chased with a haymaker. “Words fail Norman Mailer yet again,” stammered Vidal, regretting by now that writers don’t get Workers’ Comp and can only file libel suits.

But, going the distance, he had the last laugh. With spit and vinegar, the grandfather of letters outlived Mailer, Capote, and Buckley. For the cherry on top, Gore Vidal was elected president of the American Humanist Association in 2009, and died in peace in 2012 at the ripe old age of 86, ending the literary Golden Age of American fisticuffs.

[5] In his 2007 New York Times replay, “In This Corner, Norman Mailer,” Cavett wrote that Mailer’s “mission, … was to eviscerate Vidal” for the latter’s The New York Review of Books’ piece on The Prisoner of Sex, likening the title to “three days of menstrual flow” and comparing him to Charles Manson for his violent misogyny.