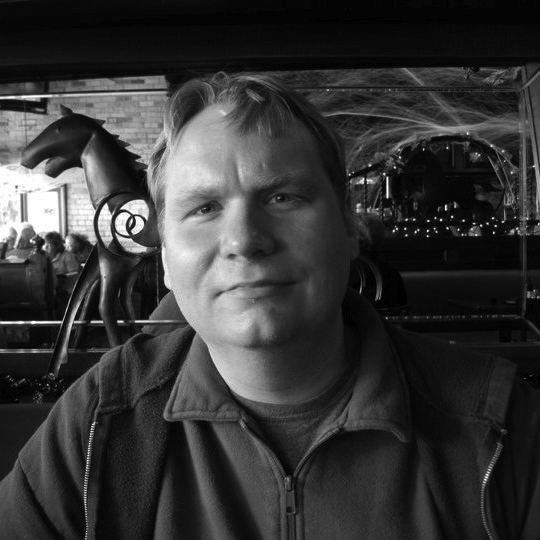 The delivery man left an oblong box, as tall as a man, two feet deep, on the front porch. Mart tried to lift the ungainly package alone, but couldn’t get purchase, so he went back up the stairs and knocked on the door of the apartment closest to his.

“Jesus,” the neighbor said. “You could fit a body in there.”

They huffed and lugged, pulled more than carried, the box. By the time they got the load upstairs, Mart had a twinge in his back.  His legs ached. His arms shook when he dropped them to his sides.

Mart levered the box against his living room wall and stood it upright. Exhausted, he sat on the arm of his couch, stared at the box.

Inside, he found a body with brown hair in an austere cut, nearly the same as his own. The body wore a simple black running suit, no jewelry, not even a watch. The face looked vaguely like Mart’s, and so he went next door for a second opinion.

“Just look. He’s got your nose. Your ears.” The neighbor pulled up an eyelid. When he released it, the lid smacked back into place like a tiny lip. “This is really something.”

Mart pulled one of the body’s arms up, covered its mouth as though hushing what it had to say, using its own hand for the stopper, and then he covered its eyes. He finagled the body’s other hand into a fist and punched at its face. The head rolled to the left. The running suit whispered at the seams.

The body, removed from its box now, sat on Mart’s couch, propped against the armrest. Mart had changed it into an old sweatshirt and a pair of jeans, given it underwear and a pair of socks.

“Have you checked things out?” the neighbor asked. “You know.”

The thought occurred to him that perhaps he should call the police, or a coroner, an undertaker, but he only needed a second to dismiss the idea as ridiculous. “If it’s me, no. I’m not missing, not dead at all.”

Mart took to cleaning the body, bathing it with a sponge, changing its shirts with the days. He touched up its hair, shaved it once, though it didn’t grow any stubble to speak of. He tried feeding it casserole. The bites slid easily down its throat. About waste, he’d worry later, when it happened.

He came to enjoy dressing the body, gelling its hair in the morning. He tried different clothes, judging what worked on the body from across the room. He ran his palms over its thighs, decided which fabrics felt most comfortable when someone else was touching them. He experimented with ties.

At times, he lamented that no one could see his efforts, but after a month or so, he began trading his outfits with those of the body, and he found they served him almost as well. The neighbor suggested that Mart should go out more often, to bars, or to Social Events.

Maybe, Mart thought, but the body looked the same as ever. Face in mirror, reflection on water, twin in utero, up there, on the ultrasound screen.

What wasn’t a truth in the world?

When the time came to be done with the body, Mart was afraid. Going back to worrying about nothing more than which arm shook which hand, what shirt went with what belt, how to cook for only one, could be difficult.

Into the closet went the body, beside Mart’s skis and his winter parka. Before shutting things away, he pulled aside his old clothes, his old shoes, his photos, rumpled, unclean sheets. He looked deep. There, the body lay crammed, very much like a hiding child, but for its uncharacteristic size. Uncomfortable. Bent. All elbows and knees. One foot curled into the back of the opposing thigh. Awkward. The body’s expression was blank. Mart reached out and adjusted the body’s crooked foot. That was better. Much better.

Curtis VanDonkelaar teaches at Western Michigan University, where he earned his MFA. He’s won multiple awards for his writing and worked as a copy editor with New Issues Press.

3 Replies to “An Archive of Manly Questions”