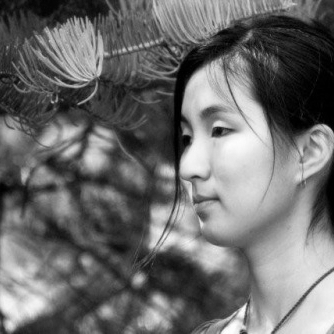 WAKE: the eighth of 72 transformations

Wukong, protector of hollows,
squeezed his eyes into needles.
At age twenty he had accepted his fate
to be exiled into a unique freedom.
Distilled from beginning stone, this blood
must transform into anything.
His voice, a crescent of fugitive smiles.
His arrival, an apparition.
While riding on the rail he read wonder comics. He felt that
he understood the german scientist made of vapor.
He liked the dotted way color, dark and light
ransomed living characters on flat surface.
Their dyed bodies melded into one another.
Running his fingers over their flammability,
his hot monkey suit weighed on him.
Panic dripped from his in-between pores.
As he stepped through the sighing doors he felt the seeds
of what it is to touch unfiltered happiness,
light skating on the domed heads of nude humanity.
As the crowd surged around him, dragging with them
inadvertent simian hairs,
his insides sunk on the burnt edge,
synapses stretched like dawn on the bed sheet,
soul in blood on floss rushing with water
down the metal esophagus. He could be many. He could be all.
He could be anything, nobody, an army of moths
surfacing the electric cocoon.
Anything but one.

In mixing with the thinnest atmosphere
he came into a special power
and took large masses of cloud into his arms like children.
Maybe it would snow.
One of the elders had gone stiff.
Wukong had watched him die.
They sat behind the drape of waterfall, faces dusking.
He thought of Adonis.
Adonis dying, perhaps posed neatly on a slab of marble,
hands content with themselves, not to own
their perfection, and now to release it.
You cannot release what you do not have. This logic
pained him and echoed between far peaks.
Climbing to the summit of the highest mountain,
Wukong thought to achieve a productive anger.
He ripped out a fistful of fur, chewed on it,
flung it like ashes to the dull wind.
They would become an army of protectors,
a swarm of selves. For this he related most to bees.
The was an intake of rare breath, twin dust motes for each flake
that closed on them
before mixing with his emergency,
and the dark animal body
confused by cold and the tiny bleached points
of hard water
slipped quietly into flight.

Feng Sun Chen is an MFA candidate at the University of Minnesota (starting this fall, in poetry), and her work has appeared or is forthcoming in nthposition, Pop Serial, So and So Magazine, Illumination, Vellum, and Paper Skin Glass Bones. Her website is fengsunchen.com.