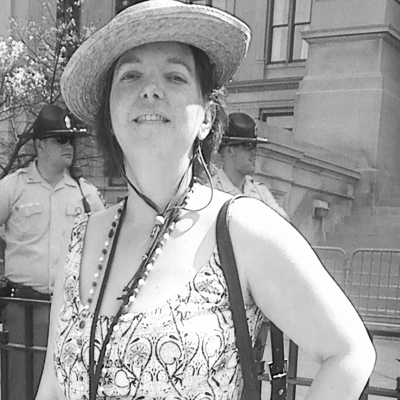 Here you are, only you, the rock, and the hill.  Nothing else.  No light:  no sun, no moon, no fire, no lamps, no stars.  No darkness:  no night, no shadows, no inside or underneath, no time.  No death, that’s over and done.  There is only gray rock, gray hill, gray distance which fades away into nothing at all.

At first you resist.   Full of defiance, you refuse.  You walk around the rock, turn away from it, lean your back against it.  You stride up the hill and look out over nothing.  You walk slowly down the hill and past the rock, walking more quickly now, picking up speed.  You walk away from the rock and the hill.   You start to run.

That is when you discover there is nowhere to go.  The grayness doesn’t end, it just isn’t.  You find yourself back at the rock.  You sit down.   You sit for a very long time, perhaps centuries, perhaps minutes.  You lie down.   There is no sleep here, either.  It’s uncomfortable.  You sit up.  It’s not better.  You bite your own knuckle in rage.  There is momentary pain, but no blood.  The skin does not break.  You punch the rock.  It hurts more than the bite, but there are no results.

You discover that you can bite your fingernails and they stay bitten.  You carefully bite each one down to the quick, which does not bleed.  You start in on your toenails; they are harder.  You pull out your beard, whisker by whisker, and your hair, one at a time.  You pull out your eyebrows—difficult without fingernails, but you are patient—and your eyelashes.

You grab your knees and rock back and forth, singing every song, reciting every poem, telling every story you know.  You realize you don’t know much.  You repeat them all until you can’t remember which part of which tale of which poem of song belongs where.

You decide to be quiet.   This seems good to you for a while, noble, a kingly reserve, until you notice that no matter how quiet it is you can’t hear yourself breathe.  No blood rushes in your ears.  You feel for your heartbeat, but there is none.  The silence is absolute.

You jump up, howling, and fling yourself headlong at the rock, which gives a little.  You step back, head ringing, shoulder bruised, and consider.   You lean forward, carefully this time, put your arms around the rock lovingly, shoulder against the gray stone, and heave.  The rock moves.  You push more.  It gives more.  You push forward, not paying attention to which way the rock is going, feet scrabbling on the gray dirt, which is dry and loose enough to be treacherous but not soft.

The dirt where the rock was is the same color as the rest.   Your feet feel no difference in temperature or damp.  You heave, sweating a little; the rock is pointed uphill.  Very well.  You push it.  It moves.  This consumes your whole attention.  Your shoulders burn and your biceps ache, your knees creak and strain.  Gray dust flies up and gets in your eyes.  You shove and wrestle, scrape and groan.  You push like a woman giving birth, only uphill and without rhythm or blood, and the only result is a stone that does move.  Up an inch, up another.  The hill is low enough to seem possible, to hold out hope, tall and steep enough to be hard.  That is the point of this hill.

At some point, you reach the top.   You realize you are there, just a moment too slowly.  The rock, too large to be held, slips from your arms.  You try to clutch it with the nail-less pads of your fingers as it slides away down the other side of the hill and rolls to the bottom.  You follow it, shouting.

This side of the hill looks exactly the same.  You can’t tell for sure which side you came up; if you walk around the hill, the loose gray dirt gives no clue.  You rest a little while and try again.  This time, you pay attention as you reach the top and resolve to let go of the rock just when it is perfectly balanced.

It slides away again and rolls down the hill.  You scream and cry and curse the gods in all of the languages you know, which is only one, and carry on until you notice there are no echoes and your shouts die away into nothing and then you stop.  You throw yourself down the hill after the rock and roll to the bottom.  Covered in dust, you lie where you stopped and weep, except you do not have tears.  Neither tears nor blood; these belong to the living.  You do have sweat; it itches and makes the dust stick to your skin.

You lie on the ground.   You look up at grayness.  A pebble jabs into your back, and the back of your head, hairless, itches.  You lie still, until the lack of motion starts to make your joints ache.  You sit up.  Once you have done that, it is only a matter of time until you are pushing the stone again.

You push the stone halfway and let go of it.  You experiment with pushing it to different heights, then letting it roll down again.  This satisfies you until you think to wonder how you can know whether one height is really different from another.  You can’t; the only measure is the hill, and it is singular, and the same on all sides.   It has no features, except that it has a top.

You sit down in the dust, which slides a little under your weight.  You are still halfway up the hill.  You sit there for a long time, perhaps.  Eventually, you stand up.  You start down the hill towards the rock.

Sara Amis holds an MFA in Creative Writing from the University of Georgia and currently teaches at Georgia Southern. She won the 2007 Mangrove Review award for creative nonfiction. Her work has appeared in Magpie Magazine, The Dead Mule School of Southern Literature, Jabberwocky 3, Datura, and is upcoming in Lilith from Knickerbocker Circus Press. Her poem series The Sophia Leaves Text Messages was published by Papaveria Press September 2009, and she has an experimental poetry project on Twitter.com titled “The Traveling Bobcat Poetry Show.” She likes to wander from genre to genre with blithe abandon.

Sara Amis holds an MFA in Creative Writing from the University of Georgia and currently teaches at Georgia Southern. She won the 2007 Mangrove Review award for creative nonfiction. Her work has appeared in Magpie Magazine, The Dead Mule School of Southern Literature, Jabberwocky 3, Datura, and is upcoming in Lilith from Knickerbocker Circus Press. Her poem series The Sophia Leaves Text Messages was published by Papaveria Press September 2009, and she has an experimental poetry project on Twitter.com titled “The Traveling Bobcat Poetry Show.” She likes to wander from genre to genre with blithe abandon.