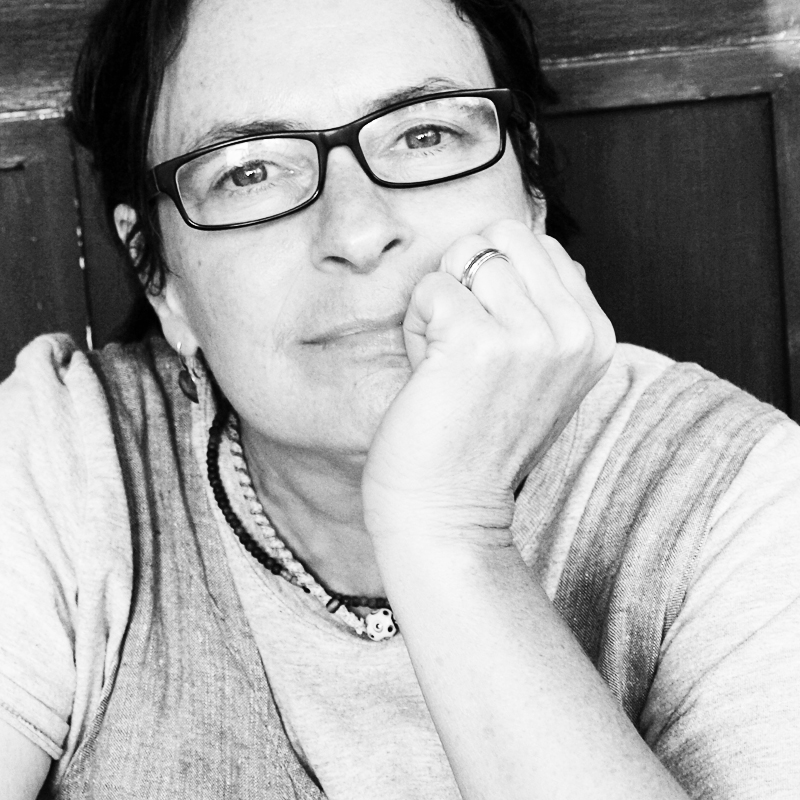 She boxed away her Virgin Mary, the ceramic blue Virgin Mary and Child her Mémay had given her for First Communion.  Her rosary beads, which she took on all her travels, are in a desk drawer, in the same tin box they came in.  She was fourteen when her Mémay gave her the beads, telling the girl that her uncle had bought the beads on a busy seaside boardwalk.  She knew that boardwalk, a place where the smell of fried fish and the whirligig of flapping pinball machines met the cold Atlantic Ocean.

She travels without them now.

Her stone Buddha sits high upon a bookshelf, unadorned.  Her Tarot deck is missing the Queen of Cups.  The Way she has tried to walk – that path that is what it is, neither crooked nor straight, but both – has grown so narrow of late she feels crippled by her own irregular heartbeats and fallen arches.

She stands behind beads brought back from India, on the threshold of a great leap forward, and listens to her heart spin like a phonograph with a broken spindle; the black vinyl warps and wobbles as it limps out The Singing Nun, which her Mémay would play when she visited: Dominique, nique, nique, S’en allait tous simplement. That simple Saint Dominic: impoverished, joyful, countryside wanderer, singer of praises to the Lord.  His story made famous by Sister Luc Gabriel, whose playful and giddy adoration of God went unappreciated by the Mother Superior until it was realized that this young nun’s boisterous voice was clear and pure enough to deliver them all to the heaven they felt they deserved.

She deserves a heaven here on earth, but she doesn’t know how to pull one down from the sky.  She would weave a tapestry of saints, but it would unravel at the merest touch.  She would sing a plain chant, but she grew tone deaf the evening she first heard the blackbird: dusk on a crooked Stockholm street, overlooking the brackish Baltic Sea, with the second woman who broke her heart.

But those are pastoral visions and pristine cityscapes.  Perhaps, he is waiting for her on the bottom step of a fire escape that hugs the side of a grimy brick building in a dangerous part of town.  He is smoking.  He is lean.  The angles of his face move like gears in the shadows thrown by globed street lamps and neon lights.  He smells like redemption.

But I know my gods, she thinks, as he tells her who he is.  And besides, what am I doing in this place?

He tosses his cigarette on the pavement and crushes it under the toe of his thick, black, motorcycle boot.  He looks (almost) like the men standing outside Hell’s Kitchen that she and her best friend passed on their way to CBGB’s the summer after her father died and they took a bus to New York and stayed in the apartment of her friend’s sister, a flight attendant, whose kitchen cabinets were overstocked with tiny bottles of airline booze, which her father used to call nips, and which she and her best friend consumed, along with too much cocaine.

The man in leather nods yes, as if he were there, as if he remembers along with her.  Mapplethorpe, she thinks.  I have stumbled into a Robert Mapplethorpe photograph.

He tells her his name again.

How come I’ve never heard of you?

He tells her something about only finding what you look for, and she hears the opening notes of an Italian concerto, which he does not.

I could have used you.  She tells him.  Back then.  I could use you now – she points to her breast and the violin becomes a blackbird, before it breaks a third time.

He shrugs, looks indifferent, angelic, arrogant in this smudged city, in that leather jacket.  And she remembers, as if inventing the story, a rainy night crowding into a cab with friends.  She slides in and moves as close to an older woman named Gudrun as she can to allow room for Gudrun’s younger lover, Hedvig, whom everyone called Tulla.  Suddenly, Gudrun grabs the collar of her jacket and pulls her close, leans into her neck, closes her eyes, and inhales.  I love the smell of new leather.  Gudrun’s words are slurred and thickly Swedish.  Gudrun’s serious face is close enough to kiss, but she never wanted to kiss Gudrun and she never would, but even before Gudrun lifted her face and told the driver where to take them, she knew it was the most erotic moment of her young life.  Gudrun eventually left Tulla for someone else, and Tulla eventually died of breast cancer or a broken heart or both.

Michelle Valois lives in Western Massachusetts with her partner and three children.  She teaches writing and humanities at a community college.  Her work has appeared or is forthcoming in Fourth Genre, Brevity, Pank, Sleet Magazine, 2River, Hayden’s Ferry Review, the Florida Review, and others.