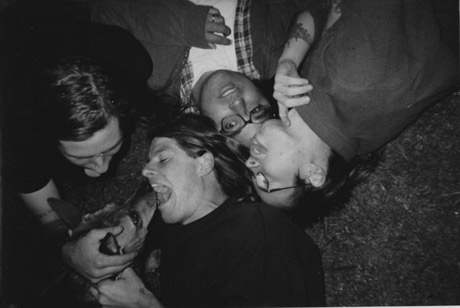 Prior to forming Wand, vocalist and guitarist Cory Hanson performed with Mikal Cronin and the bands, together PANGEAand Meatbodies. Working on the songs that would become the band’s debut album, Ganglion Reef, Hanson subsequently re-recorded his material after forming Wand with former art school classmates Lee Landey and Evan Burrows: “[I] found a band, and we re-recorded everything and then just started playing… really intensely.” Regarding the band’s name, Hanson noted: “We wanted a name that was kind of empty, like a wand is more of an idea, like a magical tool; it’s a means, a vessel to execute a superhuman thing.”

Wand released the album on fellow-garage rock act Ty Segall’s Drag City imprint, God? Records, and subsequently supported him on tour. Regarding the experience, Hanson stated: “[The tour] was great, it was a little bit crazy for us because we’ve never toured before. And the turnout—it was just a lot of people, and we were all surprised by how warmly received, how receptive everyone was to hearing us play because no one had ever heard us before. And Ty’s super fun to tour with.”

The band quickly recorded its second studio album, Golem, with producer and engineer Chris Woodhouse, best known for his work with the garage rock act, Thee Oh Sees. The album was recorded in twelve days, with Hanson stating: “I went in thinking, ‘Oh, this is going to be a really grimy, disgusting record with these really fucked-up guitars.’ And then Chris sort of took a different turn, because he just kind of gave it a Big Star treatment. So the production is, like, bizarrely pristine and all of the performances are really fucked and weird.”

Six months later, the band released its self-produced follow-up, 1000 Days, on Drag City. Prior to the album’s recording and release, guitarist Daniel Martens temporarily stepped down from the band, with bass guitarist Lee Landey stating: “He’s not touring with us this time because he’s just had a baby.” The band was subsequently referred to as a three-piece, with Martens remaining absent from press photographs.

Regarding a potential fourth album, Hanson noted: “I think we’re a little more interested in having some more creative elbow room to push out something that feels like the right next step, rather than having this consistent output of record, tour, record, tour. Having a little bit more time to work could only benefit the way that we think about making records at this point.”