The train was persistent. It was due to come through again. In a room shaped like an octagon, the corners of which reminded her of Rome (a place she’d never been) she pretended she, too, was just passing through. Forget the fact that her feet housed the splinters from the floorboards she’d been walking for years. Or the fact that every time the train passed to a place she’d never go, the  faces of friends she’d never met  stared out of yellowed windows and waved as if she were the ‘must see ‘ attraction along the way.  And at night (though sometimes in the morning, too) she’d close the thick lids of her eyes and hum “gone, gone, gone.” Then the train would come by with its smoke and its clickety-clack and the sound of the steely tracks like blades in an old time movie, reminding her of all the places she’d never go, locations were all the same to her in their mystery. Still, the people would wave, and point, and photograph her. Later, they’d speak of her as if she were nothing more than a ghost. No more than a woman of indeterminate age living in a home by the tracks whose corners reminded her of Rome.  Everyone would be simply passing through. If she had a voice, she’d like to say that everything considered, it was still the silence she loved. But the train would keep coming. She would dare the people to believe her she was okay exactly the way she was and would remain so. If only they would stay long enough to look around, to stay a bit and  reason the whole thing out for themselves.

Michelle Reale’s works have been published in a variety of venues including Smokelong Quarterly, elimae, Word Riot, Monkeybicycle, Eyeshot and others. Her fiction chapbook, Natural Habitat, will be published by Burning River in April 2010.
michellereale 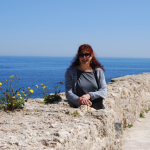