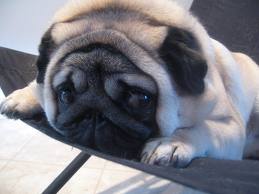 When I was eighteen years old my first girlfriend said I looked like a pug, like my face had been smashed in by a school bus. She was referring to the fact that I have a very flat face. And while her comments were harsh, I actually had to agree with her. In the same way that I have to admit my ears are miniscule, that my nose is such a small and absent thing on my face that you can’t even see it in my baby pictures, I also have to admit that my face is really, really, truly flat.

There is one possible relative who might have contributed these lack-of-facial-bone-structure genes to me. I have never met this female relative. In fact, no one in my family has ever met her. She is my great-grandmother who was possibly Native American. Though my grandfather (the one who insists on being called The Father) swears she was French. I’m betting on the Native American theory, though, so then I can have a reason for the flatness of my face. I will never know. The reason why I will never know is because this woman is absent from our family, is a woman who ran away from her four-month-old daughter (my paternal grandmother) in 1927 and was never heard from again. Thus, no one has any idea what the hell she looked like. But I turn to this fallen branch of the family tree, turn to my unknown great-grandmother of indeterminate origin for phenotypical answers. Maybe this unknown woman is from whom I got my deflated face. Again, I do not know.

There are a few more things about my family history I do not know.

While I will probably never know the answers to these questions, including why I look the way I do, I have gathered tiny bits of my family’s genealogy over the years. The story vaguely goes: my great-grandfather (name unknown) married (or was it impregnated?) some young woman (who was either Native American or French), and had a baby (birthplace unknown). My great-grandmother of indeterminate origin ran out on her four-month-old daughter, the little girl who became my grandmother (Dorothy). “Of course” my great-grandfather couldn’t raise a child on his own, so he handed her over to one of his many siblings. Irma (maiden name unknown) raised my grandmother. In high school Dorothy somehow met my grandfather (The Father), and they were married until she died (2009).

That is all I know about my grandmother Dorothy Clammer’s history, is all that I collected from the small flashes of stories she told at random moments. I know even less about my grandfather’s history, and I don’t care to. Mostly because he insists on being called The Father.

And while I find calling my grandfather “The Father” to be annoyingly patriarchal, he has come in handy a few times to answer some facts about my genealogy. One of The Father’s favorite past times is to tell long-winded stories from way back when in which I inevitably zone out while he’s stumbling through them, though some of the bits have recently started to stick in my head as I try to gather information about my absent great-grandmother. Here is what I have gathered over the past twenty years from The Father’s spontaneous storytelling: at some point The Father and Dorothy had children (Denna and Jeff Clammer) in Klamath Falls, Oregon. Then there was some car accident, possibly involving alcohol, which led to The Father getting a wicked case of the depression. Somehow this led to a move to Colorado, which led Denna to meeting my mother (Mindy) who was already living there, which led to them becoming best friends, then somehow my mother met my father and had children (Kate and Chelsey). My family moved from Colorado to Texas, following the business career of my father (life of a salesman). At fifty-eight years old my father died due to his own wicked case of the depression (death of a salesman). He died of alcohol poisoning (0.46).

There are only two people on my father’s side of the family who are still alive (Denna and The Father). And the oldest living Clammer (The Father) was nowhere near my grandmother when the great-grandmother of indeterminate origin ran out on her. So his stories are fractured bits of facts he remembers from what Dorothy told him throughout the years, stories that were based on whatever information Dorothy’s aunt (who raised her) told her about her absentee parents.

This question of who the hell my great-grandmother was started to consume my brain when I looked at my face in the mirror after my first girlfriend’s pug-face/school bus remark. I felt like there were big question marks on my skin, gaps engraved in it that could only be filled if I understood more about my family. Sick of going off tidbits of stories I heard throughout the years, I called the The Father and asked him questions that took a very long time for his very old dude brain to answer. After I asked him to tell me everything he could about my great-grandmother, he paused for a few seconds, sucked in a raspy breath and gave me the history his elderly mind could best remember. The woman who ran off was a cook who didn’t impulsively run, but left consciously. She (name still unknown) cooked at a lumber yard camp where “Chug” Loper was a logsman (yes, his nickname was “Chug” and yes, I’m still wondering how far back alcoholism runs in my family). She cooked and he cut down trees. They were young, she got pregnant. She didn’t want children. She wanted to cook at a restaurant in a larger town where she could make better wages. “Chug” (real name still unknown) couldn’t (or is it didn’t want to?) raise a little girl on his own, so he gave her (Dorothy) to his sister Irma and her second husband (Denis O’Mally, who I didn’t even know existed. He’s dead, as is Irma).

He tells me nice things. He tells me she was a decent woman, but she wasn’t ready for children. And my great-grandfather Chug, well he loved Dorothy, but there was no way to raise her properly. He worked in the woods. He was a tree faller who worked seven days a week during logging season. He couldn’t carry the burden of raising a child. They were young. They just didn’t get along. Chug needed to work. The Father, with his own history of alcoholism, did not comment on this nickname, but I could hear a subtle snicker underneath his hoarse breath when he revealed this fact. I assume that one of the reasons why the young couple didn’t get along had something to do with where my great-grandfather got his nickname.

In essence, my possibly flat-faced and unnamed great-grandmother of either Native American or French origin said nevermind. She knew the costs of being a young mother who would be expected to raise her child with an absentee alcoholic man, and so her brain said nevermind, and her body left, taking her physical attributes with her. I would like to think she wasn’t running away from her life, but was running towards it, towards what she wanted. I want to admire this aspect of hers. But there’s still a bit of me that resents the fact that she left. Because when she said nevermind, when she decided to run towards a different kind of life, she left more than just her four-month-old daughter behind. Because in essence she ran away from a family tree that would inevitably grow, that would eventually sprout a flat-faced great-granddaughter she would never meet who will forever wonder why she has this pug of a face.