We are so very pleased to announce our Gertrude Stein Award Winners for 2014. It was a difficult decision, as we received so many fantastic submissions from truly talented writers. Please join us in celebrating our winners and finalists:

3rd Place
“Song of the Amputee’s Mother” by Shanee Stepakoff

“Anonymity of Faces” by Kirk Glaser

“The Birds on Peach Street” by Anabel Graff

“Rhonda Belle and the Butterfly” by Chad Halliday

“Down the Street that Lady Comes” by Robert Krantz

“Passed into the Fire of Molech” by Hunter Liguore

“The White Envelope” by Sophie Monatte

“Another Man’s Wife” by Nicole Mullis

“The Letters of Odysseus to Kalypso” by Zana Previti

“The Rooms We Rented” by Robert Vaughan Our guest judge for the Gertrude Stein Award 2014 is the awarded author, Cris Mazza, whose hybrid memoir, Something Wrong with Her, is out now with Jaded Ibis Press. We encourage you to experience the talent and lyricism of Cris Mazza’s words. It has been an honor working with her here at Eckleburg.

Our Gertrude Stein Award 2015 will be judged by our excellent panel of judges and authors including Weston Cutter, Mary Krienke, Mary Stein and Natanya Ann Pulley. Read more about our 2015 judges below. You can read past winners in Eckleburg No. 18. 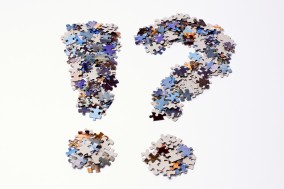 A Case of the Puncs started with the simple idea of attributing personality types to punctuation marks.

Here is my cast of characters:

I sat with a list of punctuation marks and tried to marry their characteristics with those of the people around me. Loud confident people became Exclamation Marks whilst ponderous thinkers turned into Question Marks. I thought of making pregnant women Question Marks at one stage because an upside down Question Mark does look like a pregnant woman:

Hipsters became Quotation Marks with their slogans splashed across their t-shirts. So did war vets and Goths and anyone else who liked to show the world what they stood for by how they dressed. Ellipses were people who never knew when to stop. You met them every morning in the lift on the way up to your shitty desk job. The more you ignored them the more they tried to fill the space with meaningless words. Ellipses were the type of people who walked around at the height of summer saying: what about this heat?

Commas created unwelcome pauses in your clauses. They were the people who would get back to you when you really needed an answer straight away. I’ve probably met more Commas in my life than any other type of Punc. The next most common after Commas is the Full Stop. These were men who had reached the end of the line. You saw Full Stops everywhere: on the bus, on the television, or pushing a trolley along a supermarket aisle. They had slumped shoulders and sad Full Stop eyes. Their wives were cheating; they were losing weight; they were coughing up blood onto blue tissue paper in the bathroom while their kids stood outside with tooth brushes stamping their feet and waiting to get in.

No one really knows what Semi Colons are used for. We stick them in sentences here and there without any real conviction. They hang around because no one has the guts to tell them that they’re not wanted. So I used them to represent those people who weren’t wanted: the one night stand who wouldn’t take the hint next morning; or the old friend you were no longer friendly with. Their first cousin, the Colon, was used to describe people who always tried to better anything you said: folks who would wait until you’d finished talking, before adding a list of achievements that topped yours. You’d say you’d been to Fuerteventura on holiday; they’d say they owned the island.

Brackets were soul mates; couples who started to look the same and who spooned together in bed. They lifted their coffee cups at the same time in cafes and they walked at the same pace. There’s nothing more beautiful in this world than soul mates. I thought of calling them Parentheses but decided against it because there are many kinds of brackets – ( { [ ] } ) – just like there are many types of close couples.

A Case of the Puncs is a story that I hope can be visualised: ideally, readers will see the alpha males’ pogoing down the streets on top of their Exclamation Marks knocking the less fortunate Puncs out of the way or maybe they’ll see the hipsters walking by with their Quotation Marks hovering around their heads like earphones. If I had the money or the skill I would like to animate this story as I think it would work well as a cartoon.

The unnamed protagonist in the tale is a Full Stop. He’s dead inside and he breathes bereavement. His social dislocation is leading him inevitably toward his own specific designation and he can’t do anything to stop it. He’s become isolated in his own life, unable to break out. He almost never responds directly to a question, instead internalising his answers. I tried to make him appear as if he was in a self-contained bubble.

I wrote this story sober and edited it drunk. This is how I usually work. Editing while inebriated somehow makes things clearer to me. Liquor lets me shine a light on language. I catch most of my word redundancies this way. I can also spot places where I’m not telling the truth. I highly recommend this technique. A writer should always put literature before his liver. Perhaps, A Case of the Drunks would have been a more fitting title.