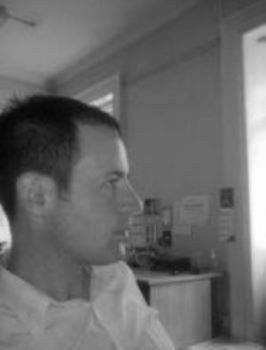 At the library I hand back two books that I didn’t read. All I did was score out all the punctuation marks in both of them. It took four bottles of Wite-Out and almost twice as many days. When I finished I felt better than I had in weeks.

As I walk out, an old man holds the door open for me. I can’t decide what kind of Punc he is. We pause and stare at each other, him with his watery eyes, mine dry, both of us sword fencing bad breath.

“Is anything the matter?” he asks me.

Dave starts up the car and indicates as he takes me home. “It wasn’t hit and run,” he tells me. “I waited a hundred yards down the road and the kid got to his feet, you know? I watched him shake himself down.” Dave slips the car into second, then third. Fences start to flicker by. “The kid looked unsteady. Sure, I’ll give you that. But there was no indication things were going to turn out the way they have. That’s why I drove off. ”

He turns off the radio and turns on the window wipers. The car slows to a halt and we sit in silence at a set of traffic lights. A Question Mark walks across the pedestrian crossing dragging a collie behind him. The lights turn green and we start off again. I look at Dave as he drives: those Quotation Marks around his head. They look like earphones.

“The doctor’s no help,” Dave says. “I get these pills and a pat on the back and I think, what am I supposed to do with these pills? Will these pills bring the kid back? Where is the pill that brings people back? That would be something worth inventing. Nearly every patient in the world would be cured with a pill that brought someone else back.”

He points to his temple then shakes his head. As I watch his Adam’s apple bob I think that Dave might be turning into a Question Mark but say nothing. Puncs can change throughout their lives. That’s something you need to understand. A couple can be happily married for thirty years – he’s a Semi-Colon and she’s a Comma. Then one day over breakfast the man announces that he’s a repressed Hyphen. He’s known it all along – known it since he was young. He needs to be with another Hyphen and only married to cover his tracks.

“Last week I went up the grave,” Dave says. “Just to tell the kid I was sorry, you know?”

I tell him that graveyards need to move with the times. I say we should be using electronic headstones, linked to social media sites, lighting up those dark cemeteries at night: “Miss you forever,” flashing above a date of death in red. Twelve people like this.

My wife is doing exercises to her Zumba DVD as I push through the front door.

She waves, like I’m on the opposite side of a river, and stops the music.

Sweat blurs in a V down her chest.

My wife is an Ellipsis.

…no way did we forget to pay that…and then this kid, well he says: let me get the manager …after my father died I swore…two for the price of two it should say…but there was a foam party on the island…it’s repeated after eight…

As I lay back on the sofa, trying to get comfortable, I can hear my wife crying in the bedroom. I think of what a let-down life is, and how you never find a woman as perfect as your mother, who gives you love unconditionally, and how it’s all back to front that you find that first and then afterwards all you meet all these women who will only ever be mothers to other people.

Next morning Dave picks me up again. He seems down and we travel to the doctor’s in silence. This time it’s my turn to see the quack. I turned forty four weeks ago.  The only card I got was from the Health Centre inviting me in for check-up.

Already seated in the waiting room is a pair of Brackets and a Colon. The Colon is rocking a baby in a pram. “Coo chee coo chee coo,” the Colon says. A doctor walks by. He stands erect as he talks to the receptionist. I wonder if he’s Dave’s doctor. He’s an Exclamation Mark and this to me is right. Exclamation Marks are important Puncs. They’re loud alpha males who live in the best parts of town. They’re go-getters and jet-setters. They become Presidents, Popes, and Prime Ministers. They fly planes; they manage banks; they go to schools that look like castles. Sometimes, if you’re out and about, you can see them pogoing down the street on their Exclamation Marks, knocking other puncs out of the way.

The nurse calls and I follow her white slip on shoes down a carpetless corridor. I roll up my sleeve as my body finds shape in the green leather seat. The nurse straps something around my bicep and it tightens. Something beeps. My nostrils flare.

“I don’t like that first reading at all,” she says. “It’s way higher than I would expect for a man of your age. Does anyone in your family have heart trouble?”

I tell her my family’s trouble is that none of them have a heart.

“Ah,” she says. “We have to rule out any underlying health issues.

I ask her to repeat herself.

“I said the fight is to get this blood pressure to drop.”