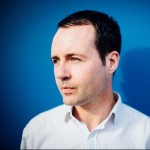 Andrew McLinden lives and works in Glasgow. He started life as a lyricist and his work has been used on a variety of film and TV projects from Irvine Welsh’s Acid House Trilogy to a recent episode of American drama One Tree Hill. He’s had short fiction published in a number of online and print journals. Andrew likes referring to himself in the third person. He sometimes walks into a supermarket and says to the checkout girl “Andrew wants to know if these cakes are part of the two for one deal you’re currently promoting?” Andrew likes to read and likes to write and hopes people like to read what he writes.