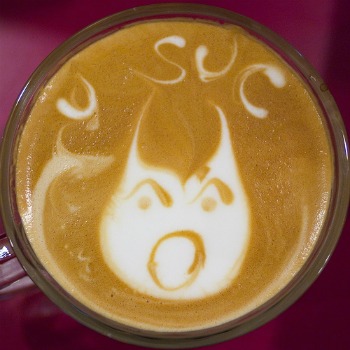 “So how’s your mental health doing?” A friend asks me this over coffee. We are sitting in a coffee shop in Chicago on a crisp March afternoon. I live in Minneapolis now, but am back in the city I lived in for five years in order to attend a writing conference. In between panels, I meet up with the few friends I still had left when I moved out of the city. This consists of three people, one of which is my therapist. That’s all the friends I still had by the time I took my crazy ass out of Chicago. These three people are the ones who saw me through my crazy times, who saw me slip away. But they stayed around to watch me slowly crawl back into myself, to re-form into something that looked like a sane, human being.

“My mental health is doing just fine.” I answer. “Why?”

“Well,” she sucks in some air, “you’re dating a man now. And, well, after a lifetime of being with women, I just wanted to make sure this wasn’t some manic break in your sanity.”

“But, dear, you’ve only been with him for a month.”

“I’ve known him for nine years.”

“Yes, well,” she flashes her eyes down at the scars on my arms, “I just want to make sure you’re doing okay.”

“I’m not going crazy because I’m with a man now. Suddenly liking a dude and a dick doesn’t make me a cray-cray.” I look into my coffee, hide my arms under the table, and feel the absurdity of this conversation overwhelm me. Being a lesbian who is now dating a man does not mean I’m insane.

But I get it. I’ve been crazy before. And my friend doesn’t trust that my crazy has fully gone away. And now this shift in my sexuality, which really is it’s own kind of craziness.

“Yup. And no depression, either.”

My friend peers at me through her glasses, looking into my face as if she’s fact-checking my expression for validity. I screw my lips into a smile for her. “Okay. But, it’s just that the last time you went crazy we almost lost you.”

“Look, I’m not going crazy just because I’m with a dude now.”

“Okay. Okay. I get it. You love him.” She looks down at the lacquered table that sits between us. I can’t tell if she’s disgusted by my change in sexual preference, or just wanting to be done with this conversation. I, for one, want to be done with it.

“As long as you’re happy, then I’m happy for you.”

“Thanks,” I say blankly. “What happened in the past is done with, and there’s nothing that can make me that crazy again.”

“Okay, dear. I’m glad you’ve come back for a visit. We really miss you.”

“Even though I’m with a dude and disbanding from the lesbian herd?”

One Reply to “STRAIGHT (up) Cray-Cray”