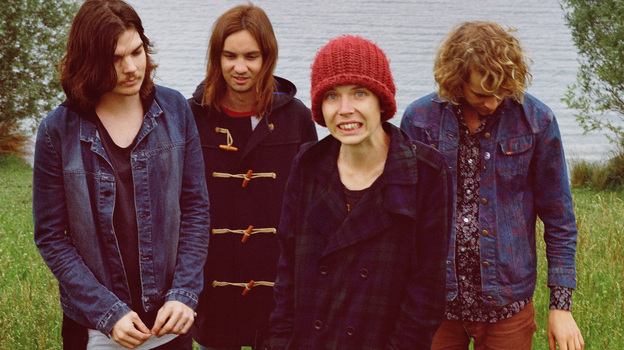 As soon as a band is labeled “psychedelic” they are thereafter branded, fairly or not, with a certain set of characteristics. The band will have meandering, dreamlike song arrangements. There will likely be some found-sound. Layers upon layers of feedback will be employed. Smoking Pot will be encouraged, and a sitar will find its way into the mix somehow. These may indeed be applicable to the majority of psychedelic bands but it is an unfortunate lens through which to analyze psychedelic music. The reason is that this perspective immediately affiliates the music with laziness, apathy, and general disengagement when in fact the best psychedelic music has a pervasive sense of inventiveness and immediacy. The biggest names of  60′s and 70’s Psychedelia (Hendrix, Pink Floyd, post-acid Beatles, The Byrds) weren’t revered solely because they were good fodder for hallucinogenics. Rather, they were notable for their need to push the boundaries of sound engineering, subvert typical pop arrangements, and generally keep the listener in a state of heightened awareness. So it is fitting then that Kevin Parker’s excellent take on psychedelic rock music — which reaches its apex on Lonerism — is as much about borrowing from his predecessors as it is about discovering something fresh.

From his isolated home of Perth, Parker has been a key component of brain-tingling psych-rock projects both within Australia and abroad. He played drums on the Mink Mussel Creek and Pond records and his role in Melody’s Echo Chamber’s debut is largely responsible for its blistering psych-pop aesthetic.  His most focused work, however, has always been with Tame Impala.  A brainchild of his bedroom tinkering, Tame Impala is at its core a musical outgrowth of the blissful isolation that fills Parker’s life.  He has noted that Lonerism is rooted in the “process of discovering that it’s in your blood to be wandering around on the outside of everything.” Yet, he notes that accepting that is not necessarily a negative; it is more like “how great is this? I’m alone!” This individualist foundation contributes to Lonerism in almost every respect. On the production side, Parker wrote and recorded the album entirely by himself.  He is a self-proclaimed effects fanatic, and his ability to craft everything from warm, crunchy guitar sounds to kaleidoscopic vocal sequences is a rarity of the millennial generation. Substantively, the lyrics of the album are constantly delving into themes of isolation, sequestration and self-imposed confinement.  Even the album cover can’t be misinterpreted. It’s a photo taken by Parker as he stands outside the Luxembourg Gardens in Paris looking through the iron bars.

Lonerism is derived from the concept of being alone but, after the first track, it is clear that the sounds that branch out from that focal point are stunningly expansive. “Gotta Be Above It” is an aural smorgasbord. The self-conscious mantra pants softly in the background; a driving drum beat with a distinctly live feel starts the track’s propulsion; the synths sprawl out in every direction like fire catching paper; and finally Parker’s sunshine voice swirls its way into the arrangement.  All of the track’s psychedelic quarks are adeptly executed but it works (especially as an opener) because of the multi-tiered song structure that slowly eats its way inside the listener’s mind. It is immediately reorienting. You might have been initially been worlds away from what Parker is trying to do, but after “Gotta Be Above It” you are firmly hooked in. Or you aren’t, and you probably aren’t reading this anymore.

While 2010’s Innerspeaker, Tame Impala’s first record, was for the most part an edgier, rawer and heavier rock record, Lonerism fully embraces bubbly pop melodies that often incorporate a deeper array of accompanying instrumentation.  “Apocalypse Dreams” is essentially bubblegum pop wrapped up in a cloud of fuzzy psychedelia.  It is by no means a simple verse-chorus arrangement — it is a patchwork of different segments that flow with a beautiful lack of direction – but its nevertheless a bright, feel-good melody. “Feels Like We Only Go Backwards” is the kind of song a whole generation of potheads will fall in love to.  It is in many ways heartbreaking but there are some tender lines (“I know that you think you sound silly when you call my name/ but I hear it inside my head all day”) and Parker’s earnest sentimentality seeps out through the sun-drenched synths. “Why Won’t They Talk to Me”’s melody sports a joyous sheen and the lyric “whoopsy-daisy” even works its way into the chorus.  What’s important though is that the full line is “destined to be lonely old me, whoopsy-daisy, thought I was happy.” This juxtaposition of painful words and carefree sounds is constant throughout Lonerism.

From the very first song Parker’s stories follow the decree that he has to “bide [his] time as a face in the crowd.”  What is odd is that outside of his own head Parker is arguably the most well-regarded figure in modern Australian rock music. He headlines major events in his home country and has an intense fan base around the world.  However, it is possible that all of this exposure has only heightened his need to be insular.  His music seems to be a form of self-medication.  He sequesters himself from everything around him and finds some peace in quiet isolation.  On “Apocalypse Dreams” he sings “everything is changing/ and there’s nothing I can do/ my world is turning pages/ while I’m just sitting here.”  Other songs touch on how he is struggling to stay the same but everyone expects him to become an entirely new person.  That person is the subject of “Elephant.” One of the years best single tracks It’s a character that is painted with a mixture of awe and disdain, as the subject exudes confidence and “shakes his grey trunk for the hell of it.” Further, in one of the best song lines of the year, Parker notes that “he pulled the mirrors off his Cadillac, because he doesn’t like it looking like he looks back.” This is the opposite of the person who is exposed in Parker’s songs – a loner that often embraces his loneliness.

Parker’s talent with sound manipulation is evident not only during his hyper-psychedelic fits but also in the near perfect guitar and synth sounds he is able to produce. Near the end of “Endors Toi” a distorted guitar line rears its head and, although it is short lived, its phenomenal crunchiness leaves a deep impression. “Mind Mischief” starts off with a laid-back groove of a guitar riff.  The drums follow all fidgety ala Tomorrow Never Knows. Bass and vocals enter almost simultaneously after a brief intro. A melodic sounding bass sliding in every direction accompanies the airy Lennonesque vocals perfectly. Now enters a dreamy, bleeding synth that carries on just long enough to enter back into the groove that started all of this beautiful chaos. Ultimately, Lonerism is more fully realized than Innerspeaker, which may have resulted in some unpredictable obscurity being thrown by the wayside.

Parker’s music has the odd effect of inspiring introspection, passivity, and exuberance all at the same time. Its a record best enjoyed the way it was created — in a quiet place where one’s thoughts can roam toward any space necessary. However, I can also see it being played by new lovers on their way to the coast, or by a group of friends on a lazy day in the park.  Parker may have never foresaw that fate for his recordings but (while he may not always discuss it) I’m sure he’s quite pleased that people enjoy his music as much as they do.  He’s a loner, after all.

Matt Levin is an assistant editor of The Doctor T. J. Eckleburg Review.