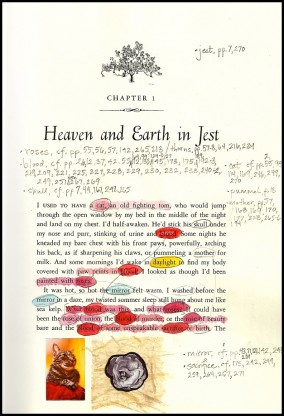 “Penciled notes [in a text] indicate a curious mind, kind and meditative, one that grapples with ideas, links notions from one book to others….[making marginalia is] more like a way of seeing, a way of being in the world—or rather, of being not in the world, but in its wide-open, generous margins.” –Anna Maria Johnson, “Marginalia”

Last April, The Doctor TJ Eckleburg Review was thrilled to publish Anna Maria Johnson’s essay “Marginalia.” I found myself thinking about this essay lately, as I have been making much of my own marginalia. That whole working towards an MFA thing. As I was thinking about “Marginalia,” some other questions came to mind about how readers and writers engage and interact with a text. I decided to finally send Anna Maria a little hello, as well as ask her a few questions I have been mulling over since reading “Marginalia.” Let’s just jump in!

Chelsey Clammer: You say that reading closely is to “engage [with] the text very physically.” What part does the reader’s body play in the reading experience?

Anna Maria Johnson: This is an interesting question–I guess because often, while reading, I tend to forget that I inhabit a body. Reading is a very abstract activity, compared with most activities. Yet I do tend to engage physically with a book while reading. I can’t stand to read for as long on an electronic device compared to a print book; there is something about holding and turning those pages, feeling the texture of paper under my fingers and then manually drawing pencil lines or marginalia that focus my attention in a way that digital readers fail to do. Of course, reading requires the use of obvious body parts such as my eyes and my brain—the mind is inherently attached to the body, despite western tendencies to perceive a division there. Recently I’ve begun thinking more about the physical body with regards to reading and writing as I started tutoring a graduate student who is blind. I’d underestimated what a visual process this all is until she and I began fiddling with the voice-software that she uses to hear texts—including her own—read to her.

CC: Oh interesting. Let’s talk a bit about the writing side of all of this. In Writing Down the Bones, Natalie Goldberg says that when a writer hits that sweet spot during writing—when she is fully engaged in the act of writing—an observer can see how her whole body is engaged. This body engagement gives the writer the space in which her thoughts can flow out onto the page without the mind and body even aware they are creating them together. The words simply flow out of the writer. How do you think both the reader’s and writer’s bodies are, in a way, engaged with each other through the text and how is this a part of the reader-writer relationship?

AMJ: It’s just astonishing to me whenever I think about these black marks on a white page and how they represent the innermost thoughts of someone other than myself—possibly someone long dead, almost certainly someone I will never meet in person—and yet in the process of reading, I let this stranger’s thoughts penetrate my own mind. In books, I have read thoughts so intimate it is hard to imagine the person on the other side of the book having the guts to say them out loud.

CC: You mention how in Annie Dillard’s Pilgrim at Tinker Creek she at times “shamelessly steals biblical phrases and weaves them into her prose.” I find myself doing this often with other people’s writing that I study, letting someone else’s words influence my own. In her essay “A Sort of Leaning Against,” Maggie Nelson discusses what it is to steal from an author versus “leaning against” someone else’s writing in order to inform your own. Nelson states that this “thinking-with-others, this weaving of mine and others’ words [is] part of the texture of my writing.” She considers her “leaning against” other writers is a type of intertextual writing. What do you think about this concept? Do you think readers create marginalia as a way to digest a piece of writing in order to re-create it into something of their own?

AMJ: Well, sure. I haven’t read the Nelson essay you mentioned, but I will want to seek it out now. I like the phrase “leaning against,” and find it more palatable than “stealing!” When I was young, I thought I sometimes had original ideas, and I hardly ever think that anymore. I may synthesize ideas in a new and interesting way, and I suppose I still dare to believe that at least the details of my particular life as it is lived in time is, to some extent, unique—but I never worry anymore about whether my ideas are truly original. Someone is sure to have said it before, but what’s the harm in a little repetition? I now think of that synthesizing process as the real seat of creativity.

CC: Talking about second-hand books, you state that when you find a previous reader’s marginalia, you perceive this as a “subtle underlining [that] represents a shared experience between me and that unknown person.” I must admit that at times I am annoyed to find another person’s marginalia, as I will find myself steered towards what they were thinking about instead of paying attention to my own thoughts. That said, it is quite amazing to see what other readers find important—things that I might have completely missed or disregarded if I hadn’t seen the previous reader’s marginalia and underlining Do you have any further thoughts on this since you wrote “Marginalia?”

AMJ: I, too, am often annoyed with others’ marginalia, especially if it is done with bright yellow highlighter or something. I guess it depends on the person who was doing the marginalia, right? I actually started my earlier marginalia essay when I was annoyed about some comments a stranger had written in a second-hand book I purchased online. The person had written obnoxious comments like “duh” and “ugh.” But as so often happens, through the process of writing the essay, I ended up in a very different place from where I began—I moved from superficial annoyance to a deeper understanding of annotations and how ideas are carried forth from one mind to another—a worthier thought than the one I’d started with . . . and so I edited out the beginning bit.

CC: Finally, you mention that you have “used water-colors to code certain words,” as well as drawn illustrations and made notes to yourself. From the picture you provided of a page from Annie Dilard’s Pilgrim at Tinker Creek that shows your marginalia, the reader can see how you have transformed one page of text into a type of artwork. What do you think about the connection between art and writing in terms of how the text visually looks on the page? For writers, what type of impact do you think the actual look of a text has on the reader’s experience of the written work?

AMJ: The appearance of text on a page is a subject very dear to me. In high school, I had a beloved art teacher who taught me the art of crafting hand-made books and these were probably my happiest times in those years. Many years later, studying under Trinie Dalton and Jen Bervin at Vermont College of Fine Arts, I began to think again about the intersections between the visual and the textual. TEXT/textile. Trinie pointed me toward an excellent little essay in which Lucy Corin[1] explores the concept of thinking of one’s text as a type of material, a physical thing with a visual presence. Thinking about words in this way led me to consider my writing almost as a sort of fabric that can be cut and gathered and altered like a dress I’m sewing . . . when I edit a piece of writing, I can almost feel the words in my hands, like wool or like velvet, or maybe gossamer, depending on the theme and style I’m working with.

CC: What projects have you done in the past year and what are you working on now?

AMJ: Past year: From summer 2012 to summer 2013, my husband, daughters, and I spent a sabbatical year in southern Oregon’s Cascade-Siskiyou National Monument. He’s a photographer and we both draw strength and inspiration from the natural world, so together we studied and documented this special ecological region in photos, drawings, and writing.[2] We just put up an exhibition of work, both images and texts that came out of this project, showing at Eastern Mennonite University, in Harrisonburg, Virginia, where we have been based for the past eight years. Although our time in Oregon has ended for now, the project feels like something that will be ongoing for us; we dream of publishing it in book form eventually. Right now: Since we moved back home, I’ve been teaching middle school English, which is a very interesting experience. There’s something about that age, thirteen or fourteen, that is so vulnerable and yet self-protective. Teaching is an education in itself. It’s been so intense these first few months, I haven’t been ready to start brand-new work of my own. I’d like for my next big project to be something my students might enjoy. They’ve already told me, “It had better be a fantasy novel, Mrs. Johnson.” I guess I’m interested in taking what I’ve learned about the natural world and letting it transmogrify into some kind of fiction.

Anna Maria Johnson’s writing brings together her diverse interests in the visual arts, science and nature, family systems, and spirituality. She studied fiction and creative non-fiction at Vermont College of Fine Art (MFA July 2012), where her critical thesis explored image patterns in Annie Dillard’s Pilgrim at Tinker Creek (published in Número Cinq Magazine). Her short stories and essays have been published in Ruminate Magazine, Blue Ridge Country, Número Cinq, DreamSeeker Magazine, Flycatcher Journal, and Newfound, as well as in the anthology, Tongue-screws and Testimonies. She and photographer Steven David Johnson are currently collaborating on photo-essays about southern Oregon’s ecology. View their project at www.cascade-siskiyou.org